Belay what I said ten days ago. I tried to start making bookings for a UK trip next month but was getting too anxious. I have too many things going on so I’ve decided against going this year. Maybe next year. Instant relief.

Also, it seems we touristas are no longer welcome in Europe. Of course, if you go in June, July or August, as all the Europeans and Brits do, you may have trouble. But I would only have been there in mid September and October if I went. Much less crowded then.

I was surprised to see on SBS News just now that even the Isle of Skye is being targeted for overcrowding. Again, I was there in early October in 2008 and I was the only person in most carparks.

Similarly, I was in Venice for four days in mid-October 2008. There were no crowds! it was fantastic, with clear blue skies and mild temperatures. I was walking around in my shorts and T-shirt, whereas all the Europeans and locals were wearing pullovers, parkas and puffer jackets. I couldn’t understand why, as I was perspiring. 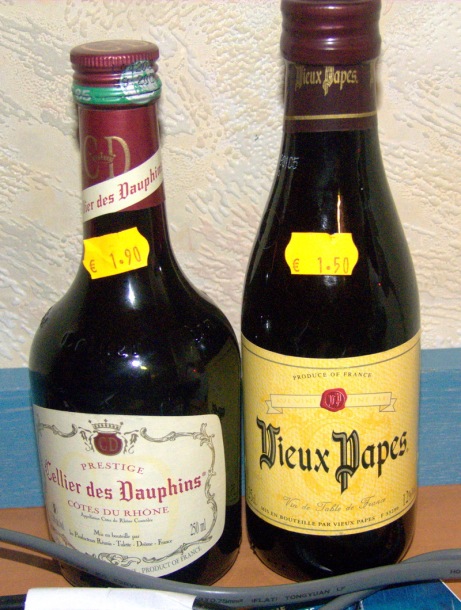 Small 250ml bottles of wine from le supermarché in Paris, $2.83 on the left, $2.24 on the right. You would pay double or triple those prices here and you don’t find them in the supermarket.

One thing I found very depressing was looking at hotel rooms in London. They are shocking. The room I get in Sanur for $75 a night is 35 sq.m. with a huge and comfortable queen sized bed and a big arm chair. I can’t fault it.

But in London you’d have to pay at least $250 a night to get anything near that. For $150 to $250 a night you get perhaps 20 sq.m. with a double bed taking up most of the room and a couple of small chairs and desk. You might get a window looking out onto an alleyway or a wall. The bathroom will be very, very small, often with the shower over the bath. You’ll be lucky to get a lift, usually stairs, with probably no help with luggage. I was getting very depressed looking at this rubbish. I would want to spend a week in London, but I think it would be an ordeal in these dumpy rooms.

Strange – the weather bureau forecasts for the last few days have been for strong winter storms, destructive winds and heavy rain. Yet today, although intermittently wet, has been mostly fine and calm. Same yesterday. I haven’t needed the heating on at night for the last two nights (I only use it while watching TV, I never need it in the bedroom).

However, I’ve had it on virtually every night since I got back from Bali on 2 July. I shudder to think what my electricity bill is going to be this quarter.

I had to replace a lamp outside my front door last week. I got the old one out OK with just my fingers in the metal housing. but I couldn’t get a grip on the replacement inside the housing to feel the sockets and twist it home. I tried a few times over several days, then a mate offered to have a go (OK, I put the hard word on him, he’s much younger than me and has a degree in engineering!)

After some fiddling and swearing, he suddenly had a brainwave. Unscrew the housing. Bingo. Job done. It’s the degree, y’see? Then we realised that the top unscrews as well, and there’s another lamp in there facing upwards. I haven’t got a replacement for that yet, but I’ll do it soon.

The old lamps were 35W halogen type in GU10 fittings. The replacements are 6W LEDs.

Another friend (Barry) was very interested in this figure of $3.41 per year! I promised to work it out for him.

In Bali, all the lights are compact fluorescents (CF). These are generally rated at 12-14W, so the power consumption is only twice the LED cost, i.e. 0.32 cents per hour. Therefore one CF lamp costs bugger all to run! Leaving one on all day costs only 2.5 cents for eight hours.

However, CF lamps have a shorter life than LEDS, about half (25,000 hours) and they slowly lose light output and change colour as they age. But the killer problem is that every lamp contains a small drop of mercury, so when they are thrown out and go to landfill, mercury is being deposited in the soil if the tube gets broken. That’s why LEDs are being pushed as the way to go.

I remember the very first time I ever saw a LED. It was 1969 and they were simple red LEDs mounted on the circuit cards of a vision mixer from Richmond Hill Electronics of Canada. I knew what they were but asked the Chief Engineer to confirm it. Yes, they were the first LEDs I ever saw. By the way, one of these LEDs costs about 25c now, way less than they cost 46 years ago. Electronic components are very cheap.

SBS ran a program last week called The Farthest. It’s a doco about the two Voyager spacecraft that were launched in 1977 on a Grand Voyage from Earth, via Mars, Saturn, Jupiter and Neptune. This was a very rare planetary alignment – the next one will be more than a hundred years in the future.

What a great program! I’ve got it recorded and it will be a keeper. It was mainly an Irish TV production, with collaboration from NASA, Canada and some other countries.

Mainly, I liked it because the director had a photographer’s eye for composition and colour. The pictures were a pleasure to watch, especially as it was in High Definition. My recording is only Standard Def, so if I see a Blu-Ray I’ll grab it.

The images from the space probe were pretty good, but the program finished with the passage of Saturn last year. We know now that it has gone past Neptune and Pluto, with stunning and surprising results. The two probes, although built in the mid 1970s, are still going strong! Voyager 1 has now left the Solar System and is heading out into deep space forever. Best estimates have the Voyager 1 Space Probe in working condition until around 2025. At this time, the Voyager 1 Space Probe’s thermoelectric generators will no longer work.

This is an historic TV program, as we’re seeing the actual people who designed and built these space probes and sent them on their way. History! Highly recommended.

In my opinion, the idea that we could ever build a spacecraft to take humans to the stars with our present level of technology is fanciful. It will take a breakthrough in physics such as wormholes or teleportation to make it happen.