Ooooh, busy, busy, busy. I have a guest at the moment and each day is packed with excitement, the good kind. It stops me sitting at this computer, which is a good thing. Sorry about the lack of blogging, though.

This morning we were sitting at a footpath cafe table and a car pulled in with a number plate CGG-123 or whatever the numbers were. CGG? I didn’t know what it was. I looked it up this afternoon and it’s City of Greater Geraldton.

But amazingly, parked two cars down was a Perth car with a number plate 1CGG-123. How about that for a coincidence?

Then, at the cafe, we got talking to the owner and, knowing my name is Peter, said he used to live in Brookton as a boy and grew up with a Brookton kid called Peter Croft. “Huh, that’s my name!” This Brookton kid was very intelligent, he said, and left to go to uni in Perth, then went to work up north where he made very high wages. But he drank and smoked himself to death, the cafe owner said. The similarity ended there. But two coincidences in one day! What are the chances of that? (Irony there.)

Ever heard of the Lexus SC-430? Neither had I. It was a copy of the Mercedes SLK by the looks, and examples are now available second hand for $10k-30k. They are all 12-15 years old and with a lot of kilometres, but with Lexus reliability and build quality, would be a potential buy. Yum. 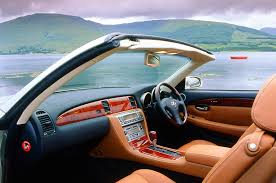 Number 1: found under the seat of my car while I was looking for something else. I ask the question, but I don’t know the answer.

Answer: one of my readers owns a Magna too, and says this is from the end of one of the seat runners. I’ll have to find where it goes.

Answer: the same reader knew that this is the “hanger” for a set of four socks.

Answer: he didn’t know this one. It’s Jupiter’s Great Red Spot, with all its swirling clouds, but greatly altered by some computer painting program.

It’s become evident that although stopping Tramadol was not the complete answer to my insomnia, my sleep now, although difficult, is better than when I was taking Tramadol. Before, I was lying awake the whole night, totally relaxed yet unable to “drop off the cliff”.

Now that I no longer take it, I get to sleep but it can take 2-3 hours or more. But eventually, I do drift off. I wake frequently, though, it feels from a light sleep. That’s with no sedative at all. I must be sleeping because I can remember dreams, but it doesn’t feel very restful. What I’m saying is that although Tramadol was not the whole culprit, stopping it has improved my sleep.

I went back to Circadin, the melatonin boosting tablets, taken two hours before bed. It certainly makes me sleepy and for the first couple of nights I dropped off quite quickly. But then I had a few nights of very long delayed sleeping again, although I felt reasonable in the morning.

I’ve run out of Circadin temporarily, so I’ve gone back to one 10mg Phenergan the last couple of nights, and that’s worked well. I have to get up to attend to the watering two or three times a night and get back to sleep very quickly now.

I have one other nightly drug which might be a culprit, but I haven’t tried stopping it yet. I will do soon. The fact that I can sleep so easily even in relatively bright daylight indicates to me that it’s something I take only at night, that wears off by next morning.

Insomnia might seem trivial in the scheme of things, but it’s a very serious problem. Often I can’t risk driving because I’m as good as drunk with fatigue, and it’s known that lack of sleep affects heart disease and diabetes (blood sugar). My morning BSL used to be quite good, but it’s gone quite high. Hmm, there’s a clue: I started a new drug about six months ago, and that’s about when the BSL went up. Hmmm.

I’m quite enjoying having Netflix available. The number of programs on tap is amazing. Most are rubbish, of course, but the gems such as The Crown and Victoria are worth sifting through the dross, and I’m well into a US politico-drama called Designated Survivor. At $13.95 per month, I think I’ll stay with it for a while.

I got interested in building a model railway a few years ago but it got sidelined, mainly because I couldn’t find a place to put it. I want a fairly large layout, not necessarily complex but so I can run trains of realistic length on long runs of track. I’ve got a lot of track and a couple of locos with some carriages boxed up in the garage.

I’ve been thinking recently that I do have somewhere I could use to build a very long layout: the “drying court” on the west side of the house. Yes, it’s outside the house, but I could weatherproof it easily enough, I reckon. There’s a 2m high wall between me and the neighbour and I could install angle brackets to support 600mm wide baseboards. The maximum length would be 13.66m. 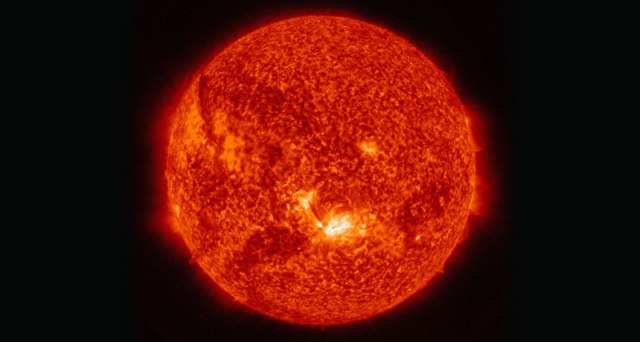 Yep, that’s me. I have a certificate to prove it: 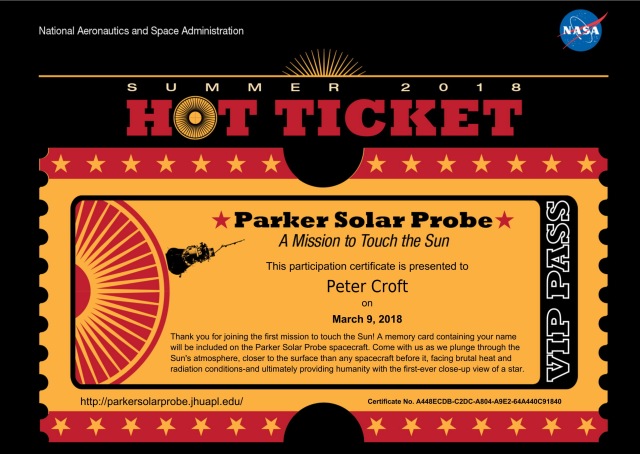 I found a link in a sciency-geeky website today saying if you send your name in, you’ll be included in a silicon memory chip on a spacecraft being sent to the Sun, where my:

“…identity will be bombarded by the Sun’s intense heat, solar winds, and high-energy radiation from December 2024 through to some point in late 2025 when the probe is likely to meet a flaming end.”

Dammit, I was sure I’d found the reason for my insomnia a couple of weeks ago, and I had about 10 days where I got good nights of sleep. But gradually, I’ve slipped backwards. Stopping Tramadol has definitely made a difference, such that if I can get to sleep, I stay asleep and feel reasonably OK in the morning.

But getting to sleep is the problem again. Two, three hours of lying there, trying every trick I know. I’ve had to go back to using Phenergan, which works but makes me droopy and slow in the morning. The doc suggests melatonin. I’ve got some from previous attempts, so I’ll try it again.

It’s reached the stage where I’m nervous about going to bed, which doesn’t help, obviously. And how come I can sleep so easily during the day, when the room is full of light?  I’ve avoided doing that today, even though I felt tired. I seem to perk up as the day advances.

The doc also says to avoid all fluorescing screens in the evening, ie computer and TV. But I watch TV in the evening!  Maybe I have to get used to recording what I want at night and only watching it next morning. But I need to get things done during the day.

I’ve had a bit of luck recently: I won Lotto last week! Yeah, a whole $13.10, not even enough for lunch these days. (By the way, back in the noughties, ie around 2004-2010, say, my lunch at the shopping centres used to cost a total of about $8, being two Miss Maud sandwiches or rolls and a drink. But now it costs me about $16, and that’s not Miss Maud. That’s inflation – even though it seems low in percentage terms, it adds up, or compounds, to be more accurate. Have our incomes doubled? I don’t know, actually. I’ll work it out.)

Anyway, Lotto, then next is that I’ve won a double pass to see the movie The Death of Stalin at the slide-ins (Innaloo cinemas). It sounds boring, but it’s a British comedy, so I have high hopes. My Bali friend will be with me then, so it’s perfectly timed.

Then today, I bought a CD, Bach Goldberg Variations, DGG, marked at $8.99. But when I went to pay, they said it’s being remaindered at $0.99. Bingo, the trifecta. It’s about time I had a bit of luck.

I need to buy a new general purpose printer/scanner (multi-function machine). I’ve been feeding tiny, expensive ink refills into my Canon for years and I’m sick of it. I must have fed hundreds and hundreds of dollars worth in over the seven years I’ve had it.

The point is, finally the makers have made printers with large capacity built-in tanks that are filled by large bottles of ink. The printers are sold with enough ink for 14,000 black ink pages and 11,000 colour pages, so in theory, you may never have to replenish the ink, not for years, anyway. And you’d probably buy a new printer when the first ink fills ran out, possibly.

So I’m tossing the Canon with its partially clogged heads and part used tiny tanks and buying a new Epson. I steered clear of Epson office machines because it used to be, if one tank ran out, no matter what colour, it refused to go on, even only using black ink. I refused and switched to Canon. But the ink costs! Canon sells big tank machines too, but I prefer Epson now.

I already have a $35 Fuji-Xerox monochrome laser printer, bought for low cost everyday printing about six years ago, and it’s been great, especially when I found Hong Kong toner cartridges at about $8 each (I bought three, and still have one left). But the paper feed has gone wonky. I’ve had it apart and I can see what’s wrong, but it doesn’t look easily fixable. It doesn’t matter now, it’s going out onto the verge as well. I’ve had my money’s worth.

That leaves the new Epson office printer, and Big Bruiser, my Epson 2880 A3+ photo printer with its 100+ year light-fast inks, no fading. With my monitor calibrator and its printer calibration, I can make near perfect prints. Lovely.

I found an ad for an oven cleaning service, so I rang them today. They asked me my postcode. When I told them, they said, “er, Jindale? Is that right?” No, it’s Butler, same postcode, just the other side of the road. And it’s Jindalee.

Well, the girl said they had no record of Butler, so they couldn’t help me. What?!

Long story, but it’s an Australia wide company and the girl was in Melbourne. So I gave my phone number and they said someone in Perth would phone me. No, they couldn’t give me an estimate of the price.

Someone did phone me, and their quote was $150, including a $10 discount. Yow, more than I expected. They said it would take about 2 to 2½ hours and involve a complete disassembly of the oven. I declined, but maybe I might change my mind and phone them back. For that amount of work, it’s reasonable if it’s a good job. The oven isn’t very dirty, but it is well used with a lot of staining. It would be good to get it done.