This heat is a new record. We’ve had more than 55 days of above 30C this summer and a record number of nights above 20C at minimum (for my exotic cousins and readers).

But tonight I know it’s really hot because even Minnie wanted to come inside to sleep in the aircon. This is a first. She usually wants to be outside, no matter what, even on icy winter nights, but she came in tonight at 8.30pm.

My aircon has been running continuously all day and my power bill must be sky high. All I can say is, thank goodness for aircon!

The headline refers to a book I have of the same title by Carl Sagan. He was well known for this saying, apparently, meaning the billions and billions of stars in the universe.

I’m referring to the biilions and billions of bits of data I’ve got. All data is information, regardless of how small or large it is. The amount of information is like entropy: it don’t go down!

I’m amazed at the number of disks of data I’ve got (at a guess, >300), regardless of whether they’re usefull information or not. Once in Bali, I’m going to have to set up a RAID 5 array, I think, so as to be able to develop a taxonomy to classify everything. By that I mean images (primarily); finance data; word processor files; useful programs; spreadsheets; family history; existing slideshows; future slideshows; video; video editing projects; backups; jokes (yeah!) and so on.

It has to be RAID 5 because it’s no longer possible to back everything up to DVDs or even BluRay disks. RAID (Redundant Array of Inexpensive Disks) is easy to set up these days, and RAID 5 is a level where the faiilure of any one disk in a group of four or more will not result in data loss. Disks can be swapped in and out without removing power (hot swapping), so a hard drive failure means a disk can be replaced and the data reconstructed.

Who would have thought we’d ever reach this level in a home situation??!! Yet it’s cheap and perfectly feasible to do now. Astounding. Tip o’ the hat to the Yanks – they developed this stuff.

Here’s an image I noticed today:

How simple life was then. No predatory banking problems, personal service in shops, your petrol pumped for you by a young guy setting out on his road to a mechanic’s apprenticeship, checking your oil, water and tyres too, guaranteed jobs after high school, affordable housing, very little stress, good manners, politeness, no swearing out loud, no fear of being assaulted.

I used to scoff at the “loss of family values” warnings, but I’m afraid I scoff no more. I had to go to the city  yesterday (Sunday) and park in the car park over the railway station. On the way up the ramps, people were detecting a hint of movement and just stopping to wait for a car to back out of a bay. It didn’t matter if it took 3-5 minutes, we were all held up behind them! One Audi driver just wound his windows up and refused all horns and entreaties to move for more than three minutes. Unbelievable. The queue stretched back three floors!

Tempers were let loose, I can assure you, and a very fat young woman (20s) actually got out of her stationary car and abused me because I blew my horn at her to move on. “Go around, you mug”, she shouted. I couldn’t because I was too close and couldn’t reverse either. I had to resort to “Ten, nine, eight, seven,… move or I’ll push you out of the way.” She moved forward, but still stopped and held up the queue behind me. All in the interests of getting a bay on a lower floor! Why? There are lifts. What does it matter?

A woman came up to me after I parked on the next level and expressed her amazement at the awful attitude of these drivers. What is going on? Family values of politeness and good manners HAVE broken down, I’m afraid.

In this scanning process, one of the difficulties is working out which way up the neg should go in the scanner. Usually, it’s emulsion side down, but a lot of the time, which is the emulsion side?

I simply do the scan and work it out afterwards. In theory, getting the correct side of the film to the glass affects the focus point and hence the sharpness, but with these old negs, there’s so much bend in the film that lack of flatness overrides which side is correct. And they ain’t that sharp anyway. More on that in a minute.

Here’s an example. When I scanned this neg, I got this result: 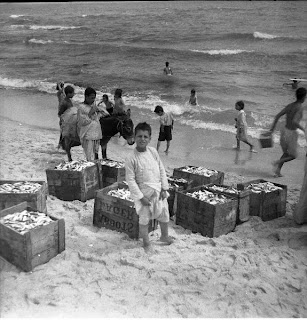 But something’s not right. It looks fishy to me…

When I er, flippered it, I got this: 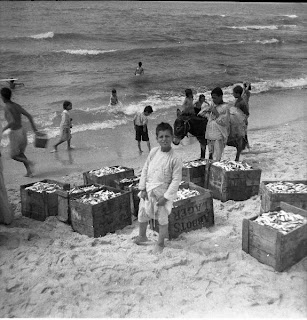 Abbot’s Lager! Now I know which way is up. Or side, as the case (yok yok) may be.

When you look closer, you see this:

First, aren’t those Wrigley’s Chewing Gum sticks in the back right side? With the arrow symbol. And those are cigarette packets front left. I can’t make out the labels, but those are chocolate bars at top left with the ribbons and bows.

Unfortunately, the point of focus is on the trousers. See how the stripes on his trouser legs are sharp, but the tray is soft? That’s the case in so many of these shots, I’m afraid. No autofocus in those days.

Forget the content, just look at the sharpness, the perfect exposure, the perfect colour balance, the perfect focus and the depth of field. All with no effort on my part. We’re so fortunate now. Get out there and record history!

I’ve been scanning negs for the past month, as I said. These are from our dear departed Brisbane uncle Darcey. He served in the Middle East during WWII and was a newspaper photographer all his working life.

I’m sure his sons won’t mind if I post a few samples, because they’re too good to hide. 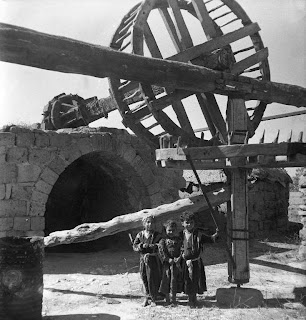 Original, ancient, authentic. Life in Palestine? 1941 or thereabouts, I would guess?

Yet on The On-Line Photographer today, a retired US pro photo-journalist was saying he tried to give his library of thousands of negs to museums and galleries but no-one wanted them! They wanted scans, done for free, but not the negs. He ended up burning the lot. His conclusion? The new generation is not interested in the past. Things are moving too quickly now.

Sorta makes you think, doesn’t it? History is bunk, as a famous person once said.

The mystery of The Holy Handtools has been solved. My brother has them. I must have passed them over at some time, but I have no memory of it.

However, if they do turn out to have value, I want my share! I am not renouncing that. We’ll see. Veeeeerrrry interesting, as they used to say on Laugh In.

It’s true. A “mate” assured me last night that his auntie’s daughter’s boyfriend’s mate’s brother’s uncle’s grandmother took her dog into Bali only six months ago and that I was worrying about nothing.

But I’ve posted the question on http://www.balipod.com this morning and I’m assured repeatedly that no four legged animals, including dogs, are allowed into or out of Bali. The ban has been in force for more than a year and may be reviewed in 2012, but even then will probably not be lifted until after Minnie’s demise.

Even if I took her legally into Java/Jakarta/Surabaya, she still has to be quarantined for 14 days. That means caged and exposed to other diseases and all the stress of separation.

This is too much. I am despondent.

I was stunned and annoyed today at a BP service station. (Service??? What service?)

I almost never use BP because they’re tied to Coles and I’ve found Coles supermarket vouchers are worthless. However, today I was in a hurry and had to fill up.

I pulled in and started to fill using the left-most hose, as I always do, in my experience the lowest priced ordinary fuel.

But I soon realised that the price was rising alarmingly and the hose I was using was NOT the cheapest, it was Premium Unleaded at $1.46.9c !!

What a confidence trick! This is specifically designed to catch the unwary, as it did me. What else can it be? You bastards!

I stopped at $8.20 on the expensive stuff, went and paid for that, then went back to the car and started again to fill up on the lowest priced fuel.

That’s the last time I use BP and I suggest you avoid them unless you like being tricked. Be warned, anyway. I was going to do a car wash while I was there, but I drove away fuming.

The bin was taken at about 9.30am this morning and I must admit, I got a bit teary. All that history, all those files, all those projects, all that effort over 25 years, gone in a blink. It had to be done, but… I have most of it in electronic form, I guess.

I’ve often thought that if I lost everything in a fire, too bad. Well, maybe I was wrong. It hurts.

However, look at it this way – if I were still here and died, someone would have to do what I’m doing now – clear the house. I’m saving you the trouble! My possessions, condensed down to a dozen boxes and a few suitcases. Easy. Be grateful.

I also took a dozen boxes of books and DVDs to the Save the Children depot in Shenton Park today. I can report that it’s easy to find and easy to deliver to. There was no-one there, but they have tables for you to put the boxes on. (They should also have a bin in which to put your prepositions before they end sentences! :-))

Despite the warning that encyclopedias are not wanted, someone had left a box of encyclopedias! Terrific, mate.

I left an envelope in my boxes with three copies of a letter stating that although most of my DVDs are marked with my surname and driver’s licence number, I authorise SCF to sell them and raise money. I hope it’s OK.

Interestingly, they do want  what they call ephemera. That means show tickets, maps, restaurant bills (interesting ones, that is), all kinds of memorabilia. You may not think it of interest, but other people often do, so don’t throw it out! It may be needed for someone researching a book.

That’s fantastic, because I have a lot of that kind of thing. Americas Cup schedules and press pass, for example; P&O Arcadia menus from 1977; a 1974 London Undergound map, now changed quite a bit; Miss Universe 1979 pass, and so on. Heaps of things too good to ditch. Living history. This is good!

That ties in with my television items. I have a small collection of items from 40 years of TV Engineering – camera tubes, a dichroic prism block, 2 inch video cassettes, 1/4 inch audio cassettes, equipment manuals and so on. It won’t be thrown out, it’s going to the AMMPT museum (I hope).

I also have about 500 images from 40 years of working in the industry. They’re all safe and preserved, don’t worry.