I couldn’t resist that caption. I have to admit, that photo was taken five years ago on a cruise ship entering Hong Kong, but I haven’t changed a bit. Slimmed down a little, maybe… ? Hah.

The title is there because this is October 29th, auspicious for three things. First, it’s Dad’s birthday – he would have been 97 today. Happy birthday Dad, you’re never forgotten.

Second, it’s 20 years today that I finished work at Channel 7. It was a Friday in 1999 and because it was my day off, I actually finished work the day before, but anyway. It was quite an emotional day. I’d been there 33 years except for a break in 1974 and you can’t help feeling a part of the show. Along with my work colleagues, I put a lot into building and operating that station. I must write about it one day.

The fact is that we, the old guard of the station, are still together although the ranks are thinning a bit. One former employee has made it his life’s work since retiring to collect and web-publish all the photos and memorabilia he can get his hands on, for all the stations, ABW2, TVW7, STW9 and TEN10. He’s branched out into radio stations and cinema, and documenting the old buildings of Perth. Unfortunately, the property developers care nothing for the history and architecture and demolish the old buildings as fast as they can. The result is the concrete, glass, stainless steel, featureless wind-tunnels that we have today. Nearly all the interesting buildings are dust now, but Ken is doing a great job keeping the memories. http://www.watvhistory.com

The third reason is that on this same day in 1999, I made my first visit to the North Beach Rugby Club. I was invited by another Ch.7 guy who was a member on the promise of a good night, and wow, he was right. I was hooked. For privacy reasons I can’t post the photos I took but it was the start of twelve years of membership and many great memories.

Twenty years retired! Who’d a-thunk it? I’ve had no trouble not working. Whenever I feel the urge to work coming on, I lie down until it passes. That’s from a business card I saw once.

No, I’ve got a million things to do, hundreds of books to read, movies and TV shows to watch, music to listen to to keep me going until that final knock on the door.

One item comes from that awful finding of 39 dead people in the refrigerated truck in England.

In my 1974 bus tour of Europe, our first port of call was Zeebrugge in Belgium, where we camped for the night. Someone, one of the guides I assume, pronounced it Zee-broozje (-zhu) and for years afterwards, that’s how it stuck in my head. Dad picked me up on it when I got back in December ’74, but his pronunciation didn’t stick with me. In fact, until last week, I can not ever remember hearing it pronounced by an authoritative voice.

But now I have. On the news video reports, both the British announcer and a Belgian source said “Zay-broogger”. So that’s settled then. It’s only taken 45 years. Dawg, is it that long?!

I admit I’m addicted to Wish. That’s the Chinese web site which sells cheap little items but they are so useful to me that I trawl it endlessly. Things like this:

This is going to get me going on my model railway at last, I think. I’m itching to start putting some of these things to use. It’s not just electronic bits, there are hundreds of useful things for cars, the house, clothing (for small Asian people) and so on. I’ve sent six orders for up to 25 items each order. The post office is being deluged with tiny parcels from China.

One item I bought is a watch:

Still, for $5 who cares, it looks very nice and no-one would know.

Another gap with no posts. Gee, I live an exciting life. Too busy climbing mountains and flying jets. Ho ho.

No, I’m back to having trouble with insomnia again. I’m pretty sure I know why, it’s a change of habit, using my laptop at the table while watching TV, instead of shutting down and sitting on the couch to TV watch. It’s become a habit, so I have to break it.

My kitchen sink mixer tap has been leaking slowly ever since I’ve been in this house and I think it’s time I did something about it. Don’t want to rush into things, you understand. Mostly the leak just runs down the sink, but some water has leaked in the cupboard underneath and er, swelled the chipboard. Too bad, it’s out of sight and doesn’t cause any problem.

I’ve been thinking and looking for some time but I’ve been a bit shell-shocked by the price of good mixer taps so it’s always been back-shelfed.

Anyway, browsing the Wish website yesterday, I saw this: 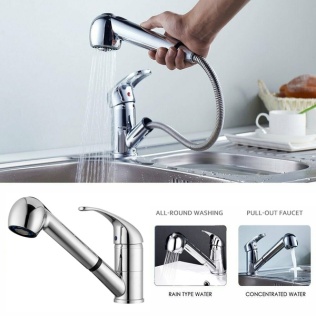 Now to install it. I don’t think I could contort myself enough to get up under the sink, so I think I’ll call a local guy who advertises for casual work.

Speaking of which, I tried to get at the radio antenna in the roof of Honda-san today. I removed the interior light from the rear roof lining and tried to pull the lining down far enough to see. Ugh! It’s hard. I drew blood on the back of my hand. I’ll have to remove some more trim first, but it’s not designed to be removed easily. My back and legs protested at my contortions and I had to give up after a while. I need a young guy to help.

I need to remove the left rear C-pillar trim anyway to run the wires for a reversing camera I’ve bought. It’s very neat – so as to avoid ripping the floor channels up to run a coaxial video cable from the rear tailgate to the radio in the front, I bought a wi-fi transmitter and receiver to go with the camera. Video from camera goes to wi-fi transmitter in the tailgate, plus a wire from the left reversing light, up the C-pillar across to the tailgate and thence to power the wi-fi Tx. So the camera only comes on when you’re in reverse gear. Clever.

The wi-fi receiver goes behind the radio, permanently powered, and its video output goes into the input to the radio/DVD display unit. That automatically switches to rear view when it gets a signal from the rear camera. Ain’t wi-fi wonderful.

Total cost – about $40. Plus my time and labour fitting it all.  I believe professional shops charge over $200 to do this job.

I forgot to mention last time that I’ve got a willy wagtail pair in a nest built on the garage door runner in my garage. The runner doesn’t move but they must feel the rumble through it when the door opens and closes. It doesn’t bother them unduly.

I must say they’ve been sitting on that nest for weeks now and I still don’t hear any tiny chirps. I hope things are OK. I should get the ladder and have a look, but… no. Papa wagtail gets a bit agitated if I go too close, but I think he recognises me by now. The songs they produce are fantastic. They are always fighting off the crows that come around my roof. Successfully, I think, as I don’t see any crows at the back of the house where the nest is. Mr Willy sits on my back fence quite a lot.

More to write, but I’m too tired. Next time.

From an article in The Guardian about whether pets have emotions. Cute, eh?

A whole month without a post, sorry. I’ve been a bit busy. I, justifiably, thought that things had turned bad for me, but they have turned out OK after all. A four day visit from my friend turned into an 11 day stay, and a very pleasant one, so alles gut. It takes all my attention, though.

The title refers to my latest time-thief. Have you discovered the Chinese site www.wish.com? Holy moley, it’s like Aladdin’s Cave, an endless display of small items which seem to answer all the needs you didn’t know you had. There’s everything from rolls of special sticky tape to power tools to machinery to clothing to sex toys and everything in between. And for some reason, a lot of the items are free, “Just pay postage”. I don’t know why, unless it’s just to lure you in, but as long as you keep an eye on your shopping cart, it seems to be true. Sometimes the price in the cart mysteriously changes, but if you check before you checkout, it’s OK.

The spout is free, the multimeter is $1. I’ve ordered one of those.

I started out with a smallish order, two items totalling about $50 as a test. They arrived OK, so I placed another order for 21 items totalling about $120 and they’ve all arrived OK. I’m addicted now. Mainly I’m ordering electronic components and small assemblies like power supplies for my future model railway (yeah, well…) but I’ve also bought a few kitchen gadgets and things for the cars. Most prices are around $2.50 to $20, all shown in AUD including GST too. The postage adds nearly as much at times, but it’s not too expensive. They arrive pretty quickly, around 3-4 weeks, and the PO doesn’t seem worried as they’re not opened for inspection. Some things would be of dubious legality, such as high power lasers, but I avoid those.

The microphone is $15 (I’ve ordered one) and the mini saw discs are $3.94 for the set. I think I’ll buy those right now before I forget.

I want this bag, but it’s $44 plus $21 postage. It keeps getting dropped from my list. Next time.

And they learn English very well:

The battery failed last week, so that was another $199. I’ve realised that the front shock absorbers need replacing (it gets into a resonant vibration), and at least one of the engine mounts is damaged. Those will be big$. The roof lining needs fixing (about $300). And I paid $75 for a second-hand tail light assembly and $90 for a new RH driving light. A new radio power antenna has cost about $60 so far. It has the beginnings of oil leaks from the rocker covers, so that will cost at least $500 to fix. Add about $750 annual licence costs plus 3rd party insurance and Wow! A cheap car is not so cheap after all. It makes me wonder whether I could get away with no car. No, don’t be silly.

Another addiction is cashews from Coles. We all know and love cashews, don’t we, but these are roasted with their skin left on, and with a light salt flavour in the skins. YUM! I’ve eaten so many that I’ve almost done the impossible, made myself sick of them. Not quite, but…  They’re in the bulk nuts section.