Another gap with no posts. Gee, I live an exciting life. Too busy climbing mountains and flying jets. Ho ho.

No, I’m back to having trouble with insomnia again. I’m pretty sure I know why, it’s a change of habit, using my laptop at the table while watching TV, instead of shutting down and sitting on the couch to TV watch. It’s become a habit, so I have to break it.

My kitchen sink mixer tap has been leaking slowly ever since I’ve been in this house and I think it’s time I did something about it. Don’t want to rush into things, you understand. Mostly the leak just runs down the sink, but some water has leaked in the cupboard underneath and er, swelled the chipboard. Too bad, it’s out of sight and doesn’t cause any problem.

I’ve been thinking and looking for some time but I’ve been a bit shell-shocked by the price of good mixer taps so it’s always been back-shelfed.

Anyway, browsing the Wish website yesterday, I saw this: 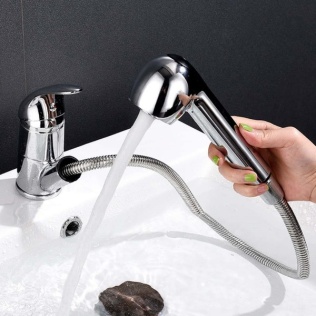 Now to install it. I don’t think I could contort myself enough to get up under the sink, so I think I’ll call a local guy who advertises for casual work.

Speaking of which, I tried to get at the radio antenna in the roof of Honda-san today. I removed the interior light from the rear roof lining and tried to pull the lining down far enough to see. Ugh! It’s hard. I drew blood on the back of my hand. I’ll have to remove some more trim first, but it’s not designed to be removed easily. My back and legs protested at my contortions and I had to give up after a while. I need a young guy to help.

I need to remove the left rear C-pillar trim anyway to run the wires for a reversing camera I’ve bought. It’s very neat – so as to avoid ripping the floor channels up to run a coaxial video cable from the rear tailgate to the radio in the front, I bought a wi-fi transmitter and receiver to go with the camera. Video from camera goes to wi-fi transmitter in the tailgate, plus a wire from the left reversing light, up the C-pillar across to the tailgate and thence to power the wi-fi Tx. So the camera only comes on when you’re in reverse gear. Clever.

The wi-fi receiver goes behind the radio, permanently powered, and its video output goes into the input to the radio/DVD display unit. That automatically switches to rear view when it gets a signal from the rear camera. Ain’t wi-fi wonderful.

Total cost – about $40. Plus my time and labour fitting it all.  I believe professional shops charge over $200 to do this job.

I forgot to mention last time that I’ve got a willy wagtail pair in a nest built on the garage door runner in my garage. The runner doesn’t move but they must feel the rumble through it when the door opens and closes. It doesn’t bother them unduly.

I must say they’ve been sitting on that nest for weeks now and I still don’t hear any tiny chirps. I hope things are OK. I should get the ladder and have a look, but… no. Papa wagtail gets a bit agitated if I go too close, but I think he recognises me by now. The songs they produce are fantastic. They are always fighting off the crows that come around my roof. Successfully, I think, as I don’t see any crows at the back of the house where the nest is. Mr Willy sits on my back fence quite a lot.

More to write, but I’m too tired. Next time.