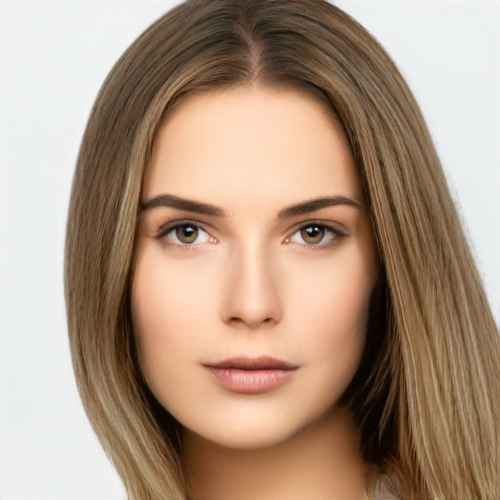 Do you know this woman? You might think you do, but I can post it here without fear of her objections because it’s completely computer generated. Yes, it’s AI at work. There’s a Google web site devoted to artificially generated faces which can be used for any purpose.

Brrrr. Even though it’s another bright sunny day, I’m a little cold. It only takes 1 degree to feel a difference, I find. Still, it’s very nice.

I’ve been taking a nightly low dose anti-histamine, Phenergan 10mg, to help with my sleeping. It seems to be free of side effects, is an over-the-counter medicine and was recommended by my GP to help with my right ear hearing blockage. Apparently it dries out the sinuses. It gets me to sleep easily, at the expense of waking late ~9am and feeling sluggish for the first couple of hours (yes, I know Doris, I should take it earlier, before I go to bed but I forget).

But it’s become a regular pattern – for some reason I wake between 1 and 2am, wide awake. And itching!! Right leg, outside calf, left leg inside knee. Aarrrgh, it’s intense, unrelenting itching and no amount of scratching will relieve it. Worse, scratching risks breaking the skin and when that happens, it bleeds and is hard to stop.

I use a lotion called Pine-tarsil which helps somewhat, but not a lot. I’m even resorting to taking Panadol which also helps a bit, but it takes a long time to work. Night time is not that good these days. 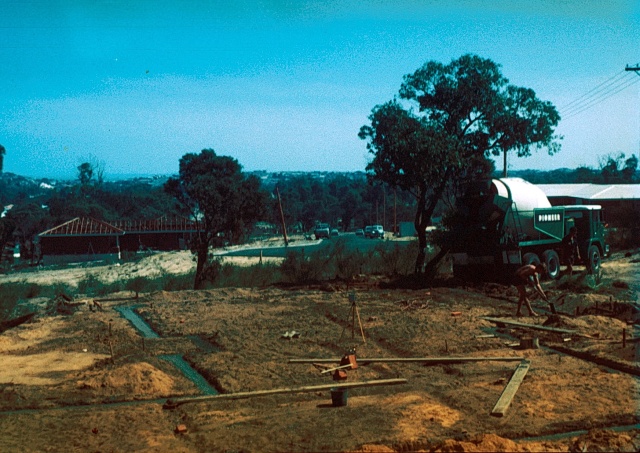 Here’s a photo that one or two people might recognise. It’s my parents’ block at 47 Blackdown Way, Karrinyup, in about 1972 as the footings were down for their AV Jennings house being built. You can just see the ocean past the trees.

November 1973 – Dad put in an awful lot of hard yakka building that garage and retaining wall.

Parked in the garage, just visible, is Dad’s Peugeot 404 station wagon. In late 1974 I bought that from him for $400. I drove it for a year or so, then sold it to the parents-in-law of some friends for about the same amount and allowed them to pay me out at $100 per month. A month or two later, it had a major engine failure and like a fool, I said they could forget the rest of the payments. I’ve always been too trusting. It was going fine when I sold it. I didn’t know it was going to break down!

Call me obsessive, call me a nerd, but it’s a habit I don’t want to break. I keep spiral bound A5 size notebooks and I write down every dollar I spend, every day. I was doing it intermittently during all the years up to 2000, but after I “retired” in October 1999, one of the first things I did was to start this habit of keeping a daily “diary” of my Expenditure. I also write in anything I need to remember and anything worth noting.

But importantly, I weigh myself every morning, in the nuddy just before I step into the shower. Same scales, same time, same conditions. Therefore I have a very long record of my weight and over the years since 2010, I’ve been entering the figures into a spreadsheet and graphing the results. Yes, it’s boring but I only enter the figures every six months or so. I can enter a whole year’s figures in about 2hrs.

Voila: I have graphs for every year, 2010 to now. I’m spurred to write about it because I finally filled in some gaps yesterday and now the records are complete. There are ten graphs but I won’t bore you with all of them: 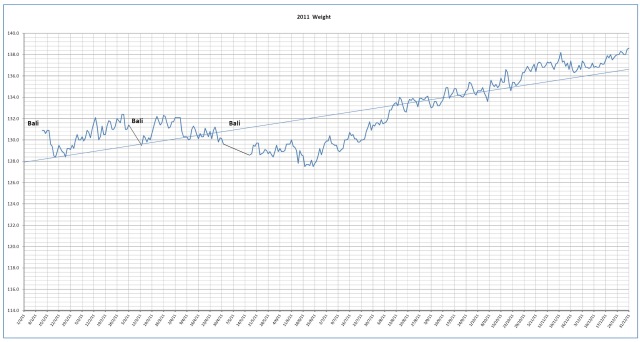 It started well, but this was the year I started to buy the Bali villa, hence the three Bali visits, and the start of a bad time from the middle of the year on, hence the rise in weight.

By contrast, this was 2013 when I was selling at Trigg, packing and moving and having a bit of trouble as the year went on, hence the weight loss.

2014 was a topsy-turvy year too, with two ship cruises. On the first in March, I gained 2.5Kg in a week with all that lovely food, as much as you can eat, while on the second in October/November, I lost 6Kg in 6 weeks due to illness.

Hmmmm, too much sitting at home since early March. How’s your weight going?

The developments in America are leading to a new scenario for a novel. How about this:

It’s becoming ever clearer that the president is unhinged. He’s denying facts, making up his own “alternate truths”, displaying paranoia, showing no leadership, peddling false theories, telling even more lies than his usual whoppers, firing anyone who he doesn’t like, agree with or who tries to speak the truth, stacking committees with his own yes men, using his family members as if they were government officials, encouraging far-right activists in violence and intimidation and stacking the supreme court with his own choices who will take the right wing Republican line. And that’s before breakfast.

Very disturbed at the direction this is taking and aghast at the decline in leadership and prestige of the United States, a group of powerful figures start to meet informally to discuss what can be done. The meetings are held at private homes, never more than once in each location and in utmost secrecy.

It started slowly with a chance encounter at a Washington restaurant between a former presidential candidate and a former secretary of state. Tentative at first, the discussion grew intense as each let slip his personal feelings of dismay and sadness at the loss of American power, leadership and prestige. That naturally, led to talk of what could be done and the idea took root: to form a secret group of powerful, connected men and women of integrity and ability, with the aim of working to explore options. They agreed to meet again in a week, using the time to sound out other potential group members.

The next meeting was held at the home of the former secretary of state in upstate New York, a weekend home in a secluded, forested location reached by backwoods roads. Present were five prominent Democrats, both former and present office holders and members of Congress, two retired Supreme Court justices, a top constitutional lawyer and surprisingly, two Republicans, both dismayed at the direction their party had taken.

After a light dinner, discussions commenced with a preamble by the former sec-state outlining what she thought their aims should be and what she thought might be possible. That quickly led to the constitutional lawyer speaking of the law concerning grounds for impeachment and the powers of the congress and supreme court. He also emphasised the dangers of taking this path.