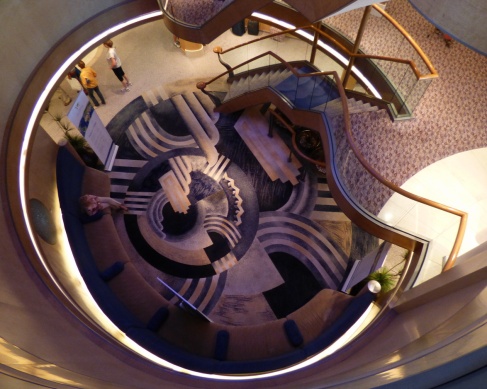 I awoke late – 8.30am.  With no windows, there is no sense of time in my cabin.  However, it was a good sleep with lots of dreams.  I had my usual cold shower, as cold as it gets, which was not very.

I read at the restaurant table and listened to iPod music for a long time – quite pleasant.  Then to the cabin to find my “trunks”, the out to the pool.

This was my first swim and it was very nice. The water was cool, but the pool was crowded with geriatric people, like myself … Goodness, there are some fat, ugly people. I’m not, of course. I got a bit sunburnt on my head.  I tried the Jacuzzi but it was HOT and didn’t swirl and bubble.  No thanks.

Then I adjourned to the pool bar at 5pm.  Brian and Maureen were there again – I can hold a reasonable conversation with them, albeit at a low level.  They’re from Sydney and retired, although Brian still works at his business 6.5 days a week.  His business?  “We cut trees down.”  A tree lopper!  He’s cruising all year!

He said he and his wife have done around 200 cruises.  They do eight to twelve cruises each year, on all the big cruise liners, including the Queen Mary II. They’ve been all through the Carribean on the US cruises. Kerrumbs!  There must be good money in tree lopping.  Money seems to be no object to them.

I was still hungry so had a salad dinner at 8pm, with a big glass (250ml) of the NZ SSB.  Brian and Maureen invited me to join them and two British guys, brothers called Roy and Derek.  Crumbs, kerrrumbs, these guys are barely sentient.  They live in Tasmania and Melbourne. Boring, boring.  It was hard to know what to say, they were so slow.

About 31C and quite smooth. Passed the 18th parallel today.  No photos – nothing but ocean to see.