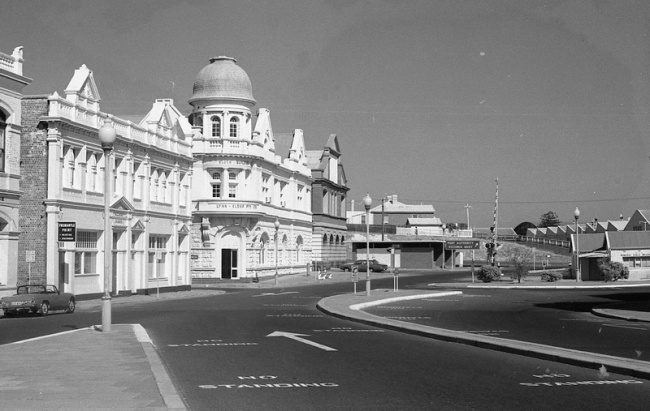 Fremantle April 1976 © PJ Croft 2014
A recently rediscovered image that will be historic one day. It is already, to some extent. I have thousands of images of WA. It seems a pity, but when I die, all this will be thrown out and lost. No-one wants it.  No-one is interested. I just noticed – that’s my red MGB parked at left. Top off on a sunny day. Nice car to drive.

I’ve been quiet lately, sorry.  Quite busy.  Damn legs playing up a fair bit (diabetic effects, minor ankle sprains) meaning confinement to home a lot. Constant work at the computer, doing things like the Avon magazine for our reunion in October.  I’m using Serif Page Plus X7 DTP software for that and I’m pretty impressed for such a low cost program.  I doubt I’m using it to its full potential.

I’m also discovering more boxes of CDs. Holy smoke, I must have well over 1,000, probably more.  Many of them are favourites but I really must do a ruthless cull.  I’ve got a friend who’s said he wants anything I don’t want, so that makes it easier.

I also have two hard drives with around 250 DVDs in “ripped” form.  These don’t take up much space, obviously, but I do wonder why I’m keeping them.  But dammit, I’ve just scanned the drive contents at high speed and I’ve seen all sorts of titles that make me think, “Oooh, yes, I must look at that.”  Episodes of Rumpole, for example, and …  bloody hell, I’ve just looked at the list more closely and I want all of them!  That’s why I kept them in the first place.  So there’s the rest of my life mapped out, watching 250 DVDs, some with multiple episodes. Hah!

CIEUX — that’s the number plate of a car at the medical centre carpark.  I guessed, correctly, that it belongs to the lovely Isobel, the French receptionist behind the counter.  She has the most beautiful French accent.

I asked her about the number plate and she said it means (the) heavens or sky.  Pronounced see-yuh. Sky on its own is ciel (see-el).  That explains my Lyle Mays CD’s title, Cielo e Terra, Sky and Earth in Spanish.

She said her number plate is also the name of a small village near her home in France.  Nice.

I had a visit from an old friend from Channel 7 yesterday.  He actually resigned in 1989 so it’s been a long time.  He’s 55 now and has decided to ease off the work and take a couple of days off a week to do things he wants to do.  Luckily he has a supportive wife, even though they have a son to bring up.

He confirmed what I knew – he was one of a string (well, three) of graduate engineers who’d been employed successively with the long term aim of taking over as the next Chief Engineer.  The trouble was, no-one ever told them.  That was the way Channel 7 management worked in our area – don’t communicate!  Don’t tell people what is expected of them. Just, sort of, y’know, let ’em find out.

The trouble was there was another engineer who was never going to leave and despite not explicitly having the title of Deputy Chief Engineer, regarded himself as such (these things were not spelt out clearly).  He blocked the path of any potential rival.  He was capable of terrible skullduggery and bullying.

The result was that these young engineers lasted a few years but got fed up, saw the future and resigned.  My friend yesterday said that when he did, the Director of Engineering was told by the Managing Director to “throw money” at him.  “How much do you want to stay?” in other words.  My friend said it was too late, he’d already accepted another job.

That confirmed what another ex-TVW engineer told me last year, same story.  He was really good, a great people manager and a good electronics brain too.  But he was on $25,000 a year!  (This was in the late 80s)  He said he just couldn’t live on that money and I agree.  Secretaries made more than that.  I was on about $40,000 at the time.

So this good engineer resigned and got the same spiel – “Oh, no, you can’t leave, we were planning for you to take over the Chief’s job.”  “But you never told me, and I can’t live on what you’re paying me.”  “Oh, well how about $50,000?  With car?”  “Sorry, it’s too late, I’m setting up my own business with another mate and we’re too advanced.”  So we lost him.  Mostly because no-one had the foresight or courage to spell things out.

That typified the company.  Don’t tell people what you expect of them, don’t give feedback, don’t do performance reviews (I never had one in 33 years as a tech!)  Then when they get fed up and resign, either go into shock, or don’t try to hold on to them.

Only once, late in my career, was I given a job description, and that was a result of being asked to write my own!  I cannot recall ever being told how I was performing or getting any feedback on my job. There was never any praise.  Pathetic, absolutely pathetic.  And always suffering the blocking and sabotage of that weird engineer who only ever ate his own sandwiches with the crusts cut off out of his biscuit tin and drank Fanta.  Never any tea or coffee, just Fanta, every day for over 30 years that I knew him.  Talk about Dr Sheldon Cooper!  This was Sheldon without the humour.  I was hugely relived to get out.

It’s great to still be friends with these guys after so long, too.  The one yesterday told me he regarded me as having much greater knowledge than him when we worked together, and that tallied with the other one last year saying that he regarded me as his mentor when we worked together.  My jaw dropped!  Really?  I never knew.  It’s nice to know now.  Pity I didn’t then 🙂

I’ve had my eye on a watch at the local jewellers for some weeks.  It’s just a Casio analogue/digital, but I find it appealing.  Casio is usually far too gross for me, but I like this one, one of the very few in their range that I could wear. 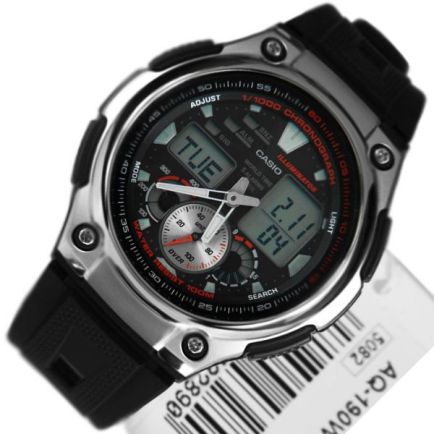 The price in the jewellers is $159.  I checked on-line and the price is $78, plus $14.95 shipping.  That’s too big a difference to ignore, so I’ve ordered on-line.  I don’t see any jewellers shops closing their doors for lack of business, so I don’t feel bad about it.

Likewise, my order for the Panasonic GH4 was cancelled because they can’t get stock, so that opened the way to order the other camera I want, the Sony RX10.  RRP $1,499 plus delivery costs.  I’m paying $1,096 including delivery.  I can’t ignore these kinds of savings.