I’ve decided I’ll skedaddle to that northern island this Xmas and New Year. It’s hard to believe it was 2010 that I last did this. I’ve been back once, last year on the way back from China and Hanoi, but I was so crook with a chest infection/pneumonia that I hardly left the room. Five days of sleeping, going out only for meals. What a waste.

It’s been five very, very tough years since the 2010 Xmas escape. I feel utterly betrayed. I can’t forgive. For forgiveness, there needs to be some sign of understanding of the mistakes that were made and some sign of remorse. There’s nothing.

Anyway, for once I feel confident enough of my legs to go to the tropics. I’ve been pretty well ulceration free this year, thanks to Dermeze. My skin on my legs seems to have built up a layer of suppleness such that it doesn’t break as easily.

I’m going for 25 days, mainly because air fares almost double in “the season”, along with a lot of hotel rates, so I’m going up mid December and coming back a week into the new year when the air fares are reasonable. I’m going Garuda this time. It’s full service, with a meal and in-flight entertainment (not that I care much about that) but most importantly, it’s a twin aisle A330 with full seat pitch. I’m sick of the cramped cattle carriers of the cheapies, and when you add baggage charges and booking fees, and the cost of food, it’s not much different to Garuda’s fare. Besides, the baggage allowance is 30Kg on Garuda. That matters to me, with my CPAP machine and tripod and all the electronics I carry. Plus, I want to be able to buy something while I’m up there and bring it back without having to worry about weight.

I’m staying in four different hotels this time, a few days in Sanur, then moving to two different hotels in Kuta for a couple of weeks for a change. Not sure about this – I should try to “get outa town” a bit. I’ve booked, but I can cancel without penalty. Still deciding.

© PJ Croft 1986, 2015. A Kuta beach cremation float. I took this shot from a crowd of tourists. Pretty well isolated from spurious tourists, eh?

It’s hard to decide between traditional Balinese accommodation, with rooms that are pretty old and well worn, and the newer hotels that are not exactly trad. But you get lifts, and balconies, and a generally higher standard. I dunno.

Both Kuta hotels are close enough to the shops and malls that I can walk there, and where I can browse and fossick to my heart’s content. I’m a bit of a shopper, I admit. I love finding interesting things. None of my hotels is on the beach front. I find I can’t walk in the sand or swim in the ocean any more – too unsteady on my legs. I’m OK in a pool, so the beach doesn’t matter as much.

I’m also deliberately choosing the wet season. I love the rain and thunder and lightning. It’s cooler, too. Yum.

For once I’ve made up my mind and booked two months out, with plenty of time to arrange things, or rearrange things if I have to. Aaaaah.

© PJ Croft 1983, 2015. It’s hard to believe, but this was shot just outside Kuta, about where Sunset Road is now. It was all paddies then, but they’re long gone. This was also a time of the forest fire season in Borneo. The air was very smokey, but it made for nice photography.

The Garuda flight leaves at 8am. Bloody hell, that means I’ll have to be at the airport by 6am, which means I’ll need to leave here by 4.30-5.00am. In any normal city it wouldn’t be a problem but in Perth, it’s a big problem. I simply can’t rely on a taxi coming up here, especially at that time of the morning.

So I’ll try one of the FIFO transport vans, I think. Sunday? Dunno. Train and bus? Not in Perth, not from here, not that early, forget it.

My great friend Baz says he’ll collect me on return, even at 11 o’clock at night. I didn’t ask him he just volunteered. He’s a good friend. When he helps me, he really helps me.

I was pretty annoyed yesterday. I was sitting on one of the seats at the shopping centre and a black African guy touched my elbow. He was holding out his hand with a 20c coin on it. He pointed to it and said, “Coin?”, meaning, could I give him a coin. I rolled my yes a bit but gave him 50c.

No, no, no. I told him no and got up and left. Bloody hell. Begging is bad enough, but to object to how much is donated turns me off. This is wrong.

Worried by traffic? Worry about this, then: 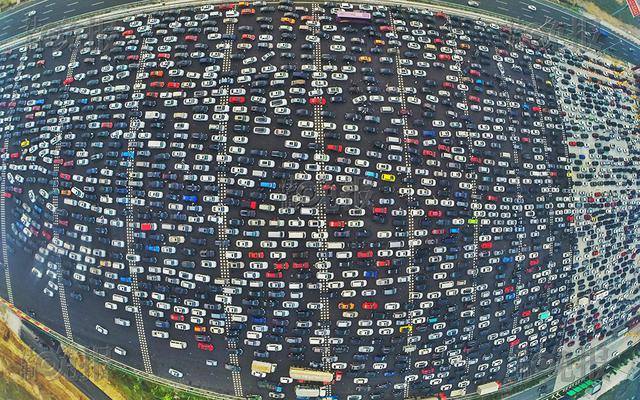 It’s China, outside Beijing as the crowds return after a holiday weekend. Roughly 40 lanes narrow down to about 15 toll gates, then once through, you have to funnel down to about six lanes for the freeway. Aaaarrrrgh. We think we’ve got traffic?