Talking to a couple of mates on Friday night. One has lost the sight in his left eye due to a detached retina. He said it started out as seeing a lot of floaters, which most people have, but these were big enough to look like flies buzzing around. He was bothered but didn’t act.

By the time he saw an ophthalmologist about it, the retina was completely detached and he was told it was too late to save it. He says he has a small amount of peripheral vision but the centre is completely dark. Scary. Be warned. Make sure those flies are real flies, or get to your eye specialist asap. 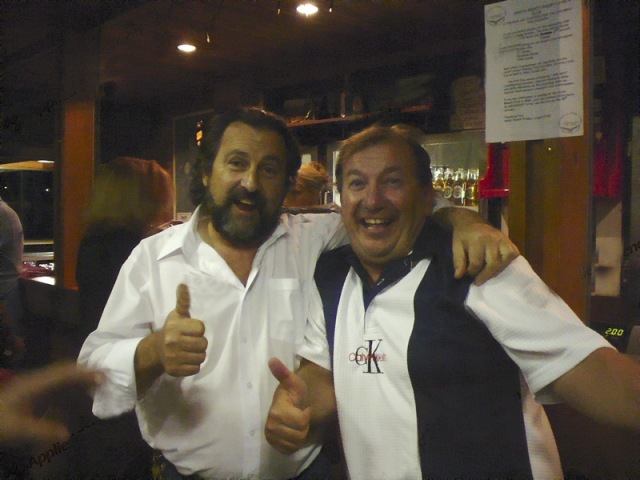 I was at the rugby club. I used to be a member from 1999 to 2013, and it was fantastic. I knew a lot of the guys, apart from the TV station mates, I mean, and the girls … ! I got to know all the girls too, and it was a really friendly atmosphere. I really looked forward to Friday nights.

Then I moved up here, but at half an hour each way, it was too far to go. And you can’t drink and drive, so I stopped going.

Now they say someone’s made a complaint, there’s a new committee, so there are no girls any more. All the players are a younger crowd and a lot of the old timers are gone (like me). So that’s the end of that. I was thinking of rejoining last Friday, but no, even my TV mates are leaving too. So endeth the fun.

I tried to persuade my mates to come up here, just for a visit, but “Nah, too far.” Great mates.

One of those guys has just come back from Bali. Very quiet up there, he says. Taxi driver saying he’s only had two fares all day. The volcano causing people to stay away, I’d say. Oh well, good for me.

I was thinking of cancelling, myself, but no, it’ll be OK. I’ll stick to my plans. Garuda seems to fly regardless. I can’t say that makes me feel safe, but …

The story is that a new airport is finally ready to start building. I’ve heard that before.

The Guardian ran a story today about the tight rope walker who made an historic walk between the twin Trade Centre towers in NY in 1974. They invite readers to send in a picture of themselves in an historic photo.

I’ve submitted the image above, tongue in cheek. I did this as a Photoshop exercise in a class in about 1994. My kimono was from my trip to Japan in 1992. I wonder if they’ll use it?

I tried my first session at a Tai Chi class last Tuesday. It’s at Currumbine, 15 mins away, so not too far.

It’s the first time I’ve tried it and even though it’s slow and not too strenuous, I still felt a bit of muscle strain and soreness afterwards. Not badly, but I felt as if I’d had a mild workout.

There were about a dozen ladies and only one other guy besides me. All of the elderly age group, of course. The next one is this Tuesday and I think I’ll go again, even though I have to pay to join. It’ll keep me up to the mark. Once you learn some of the moves, you can do it at home, of course, or in a hotel room.

Phwooaaar. I saw this yesterday in Masters and I want!

I’ve never owned a drill press, mainly on size grounds. They’re usually pretty big and heavy, and not well made. Cheap, admittedly, when made in Taiwan and improving in quality, but I’ve never bought one.

But this one looks good. Probably made in China but to Bosch quality standards. It has a laser pointer to show the drill point, and a very smooth motion thanks to that wheel, although I’m not sure it’s any better than a spoked wheel. But the whole thing oozes quality, with a nice machined alloy surface on the base, with a sliding fence. It’s not cheap at $399, but …

As well, they’re selling a solid metal framed kit work bench with two slide out steel drawers for $79. I’ve got room now, so I might buy these two. I’ve got an immediate job for them.

It’s our verge junk pickup this week so I’ve finally had the chance to get rid of some stuff. A lot of it disappeared before the truck’s come along, but that’s OK. Even aluminium framed outdoor chairs with torn and discoloured webbing were taken. People must renew the webbing, I guess. Good for them.