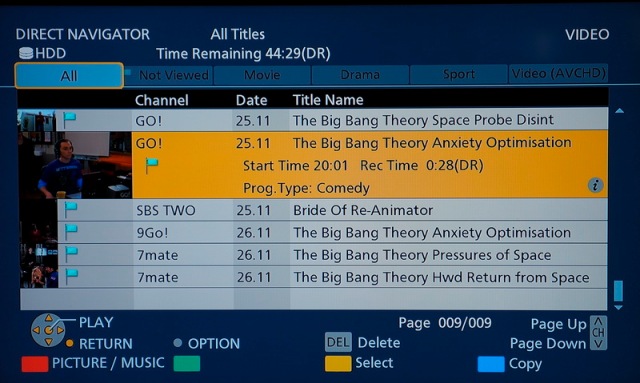 I’ve mentioned before about the repetition of episodes of the Big Bang Theory, now being shown on both Seven and Nine. I’ve had strong suspicions that they are showing the same episodes on successive nights, or even on the same nights.

Well, above is the proof of Channel 9’s careless attitude to we viewers. The same episode was shown on three successive nights 24.11, 25.11, 26.11 ! Sure, on different digital channels (Nine Perth, GO! and 9Go!), but it’s still Nine Network.

This is the only example I’ve picked up so far, but I’m keeping a diary of the episode names and the dates and channels they are shown on. I have no doubts there will be further examples soon.

In addition, Nine showed the movie Major Payne on Friday night. Bugger me but West TV, the community station, showed it again last night. What’s going on here, do they read each others’ schedules and decide to play games with us? This is crazy.

Speaking of crazy, I was bumped from behind on Friday afternoon. My car was, I mean.

Coming home along Marmion Ave, going very slowly near Clarkson, I noticed a car several cars back behind me suddenly veer to the left so as to avoid running into a near stationary motor bike.

Then a few minutes later, approaching Hester Ave roundabout, BANG. We were going at less than walking pace, luckily, but that same car had come up behind me, failed to stop, and hit me in the rear.

Luckily the cycling lane is particularly wide at that point so I was able to pull over and get out. The other guy did the same and he got out looking very sheepish. Lucky, because he looked like a real low life. Hi-viz gear, navy work trousers, messy beard and hair and about a week’s worth of dirt all over him.

I said, “Thank goodness for plastic bumpers”, because I couldn’t see any damage. He said “Sorry mate” in a quiet voice and with his head bowed. I said I thought he needed to pay more attention and stay further back. No harm seemed to be done and he stuck his hand out so I shook it (ugh!) and we called it quits. He was obviously worried I might make a fuss and I think he might have been on the grog or something. I got back in the car and re-entered the traffic, leaving him behind for someone else to avoid.

I bought two vouchers for 40 page versions, but I’ve only had one copy printed so far. It’s lucky, because having found all those photos in a box in the garage that I mentioned the other day, I want to completely revise it and add many more photos. I’ll have to add more pages I think. That’ll be tricky because all the discounted vouchers are for 40 page books. I might end up paying quite a bit higher price for the extra paged books.

The title refers to a joke I heard many years ago. A bloke’s working in an office in a skyscraper with the window open (I told you it’s a joke).

Suddenly he sees a bloke falling past the window on his way down. He yells out, “Hey, how’re you going mate?”

The falling man on his way to his death yells out, “OK so far.”

That’s the way my life seems: I’m falling towards my inevitable demise, but I’m OK so far.

Two weeks today to Bali. I feel I need to take a test drive out to the airport some time this week because all the roads have changed. There was a map in the paper yesterday showing the new layout but it was hard to understand. I feel I need to see it for myself in real life. The GPS map won’t be up to date, I fear. It’ll make a nice drive, anyway.

It seems we still have to pay US$35 for the Visa on Arrival in Bali, whereas most countries have had it waived. How embarrassing that Australia is still being treated as a naughty country by Indonesia.