Aaaah, ya gotta laugh. When I wrote about the room service menu yesterday, there were a couple of items ‘Cordon Bleu’. It was going through my mind that there could be a  malapropism lurking in there, but no, to their credit at this hotel, they had it right.

Not at the next hotel along, however. We had dinner on the beach along the footpath a bit and there, on the menu, was Chicken or Beef Gordon Blue.  He’s the red haired chef with the foul mouth on TV, isn’t he?

Two of the guys wanted pizza and it was prepared to full Aussie standard: crisp crust, pineapple, mozzarella, onion etc. as only the Balinese know how to do it. Just like you’d get at Domino’s or Pizza Hut. They enjoyed it.

The other guy had chicken teriyaki and didn’t like it much – too oily, crumby, scrawny.

I wanted local fare and asked if there was another Indonesian food menu, which there was. I asked for lumpia, which wasn’t actually listed, and got typical Vietnamese/Chinese spring rolls, just like I can get at IGA. Wow.

Then I ordered a seafood pancake, hoping to get a local variety. I got bland. Bland, cold, soft, chopped up shrimps, fish, calamari in a sorta nice white goo but with not a spice to be seen, smelt or tasted. And fries. Tasteless, forgettable, waste of time. Oh well.

At first there was no wind at all, and a little bit opressive, but after 30 mins or so, the breeze sprang up and it was beautiful. Distant lightning was flashing over Nusa Peneeda, far too intermittently to get photos unfortunately. Too far away for thunder, but there were a couple of golden yellow bolts and the occasional red flashing glow behind the island. Magic.

I was right about the camera. After posting yesterday, I went to have a light lunch (Gado gado – vegetarian and fantastic) and walked onto the beach. This time, I had the Canon 40D and I felt right at home again. A camera like this is built for the job! I can use the optical viewfinder perfectly, adjust it for my eyesight, and I can bang off shots as fast as I can see ’em. That’s better!

That’s just one of about 24 shots in 15 mins work, but everything works as it should and I don’t lose shots. I don’t think I can live with a little point and shoot. Oh, by the way, that’s Nusa Peneeda (island) on the horizon.

I was lamenting yesterday about my size being impossible to find here. No problem, says Tommy, a hotel guy. If I want things, they will make to order. It occurs to me that I could take my best polo shirt (a K-Mart brand made in India, but never to be found again!) and simply get them to use it as a template. Easy. Not sure if I can be bothered, but it’s worth a check.

Urrrrgghhh! Hard seats that cut into my thighs, hard wooden chair in the lobby for wi-fi, a table that I can’t get my knees under while I’m internetting. This is not what I expected. This hotel is mostly nice, but it’s 3 star and I’d rather pay a bit more for another star and things that work next time.

Ten thirty pm and the other guys have gone off to a bar run by an Aussie guy they know. Utterly out of the question for me. I’m knackered, everything hurts and I’m for bed, thank you.

Thursday morning:  I just got some more shots on the beach, using the Fuji S100fs this time. I’m slowly getting my motivation back, although I’m still finding it physically difficult. 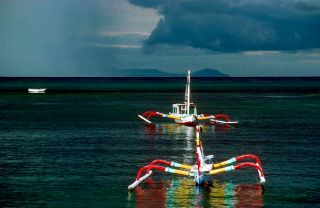 The weather is still a bit boring. It’s very grey and dull light. I’m wishing for something like the above. That’s a shot from 1986 or so. That’s climate change for you – you can’t get a decent storm anywhere nowadays.

All these shots are, or were, on Sanur beach.

Thursday afternoon: We took a taxi over to Kuta this morning to go to the Carrefour department store, because the guys had heard you could get good DVDs and so on. Naaah. It’s a big place but nothing special.
I was amazed at the changes in the area, however. Last time I was here, all that south east side of Kuta was just open rice paddies and swampy areas. I have the photos to prove it. But now it’s all urban chaotic sprawl, all the way. It’s all been developed and built on the last 20 years, but it looks so old, as if it’s always been there. Special paint, I believe…

Now for some video. I’ve spent the last hour or so shooting, editing and compressing a hi-def video of 45 secs, much higher quality than yesterday. It’s 47MB in size, so I’m about to see whether it works. Good luck to us all.

NB: I’ve just realised that I had my Settings to require all comments to be moderated (by me via email) before they appeared on the blog. Sorry about that, I hadn’t realised. I’ve reset it to allow immediate publishing.

Uh oh. It’s been uploading for over 25 mins and still not finished. I think I’ll have to bail out. How long to go? Seconds, minutes, hours? Plan B will be enacted tomorrow.