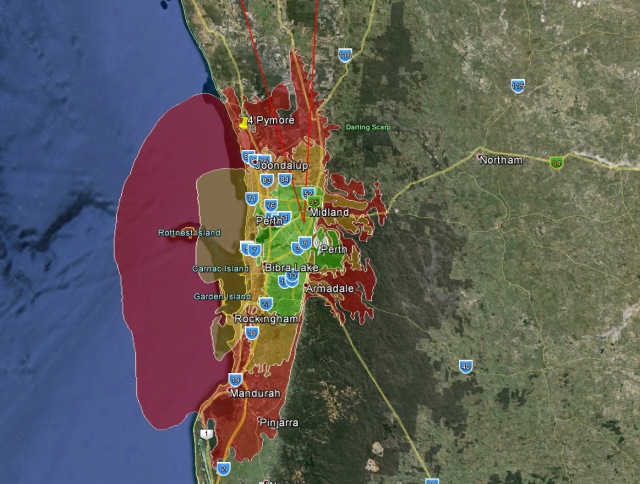 Gaaah! From the ABC’s web site:

Reception in this area will prove difficult and will require the use of a good quality external antenna and possible a low noise amplifier.
You can say that again. It’s hard to believe but the ABC does not regard my suburb as being in its coverage area. “Will require the use of a good quality external antenna”.
What’s brought this on? I received my Sony DAB+radio/CD the other day, and the sound is wonderful. Luscious is the word. It’s a stereo speaker unit, quite large and heavy (you wouldn’t pick it up and carry it around) and I was pretty pleased. Until I realised – no ABC or SBS radio channels. Twenty three (23) other radio stations, but the ABC is absent. Bloody hell. My main listening is ABC RN and News Radio in the morning (and in the wee hours when I can’t sleep).
How is it that every other radio broadcaster can reach me but the ABC can’t? I get ABC TV and SBS TV OK.
I guess I’ll have to get an antenna firm in to put up a proper external antenna and check all the house cabling.
___________________________
Item 1: “Probe has Bankwest, CBA in its sights” (The West Australian, Saturday 1 August)
A banking enquiry will be “focussed on whether banks have engineered loan defaults through property revaluations to force customers to the wall for commercial gain.”
Read that again. The Commonwealth and Bankwest (owned by the CBA bank) stand accused of deliberately revaluing mortgaged properties to force the borrowers to default on their loans, so as to benefit the banks. It’s not proven, but there would hardly be an inquiry if they didn’t have a fair idea of the validity of the accusations.
[The Commonwealth Bank] “has long been dogged by allegations over its 2008 takeover of Bankwest*, which suddenly foreclosed on hundreds of business customers of good financial standing. Many claimed they had never missed an interest payment.”
How nice. This is the former People’s Bank, the former Commonwealth government owned bank, the bank we used to be able to trust. I would NOT trust the CBA for any money.
Item 2: BHP, the Big Australian company, some months ago unilaterally changed the shift lengths at its Pilbara mines from 8 hours to 12 hours. No consultation, no asking the employees whether they could or would work 12 hour shifts, just “Do it.”
Two employees, one aged 63, the other aged 66, objected. They felt they couldn’t cope with 12 hour shifts. They both took leave while talks were sought. The 63 yo died the other day. No cause of death yet, but his wife attributes it to stress from this argument.
BHP’s response? Nothing. Won’t talk, won’t respond to the reporter’s queries.
Here we have two big Australian companies, not foreign owned, which are showing utter contempt for people and their employees. But, but, but, ….   Our beaut Liberal/National Party government has told us for years that businesses have their employees at heart. We don’t need unions, we are told. The businesses will look after their employees.
Bullshit. Bullshit. There is an unending stream of reports of companies exploiting their workers, underpaying wages, forcing changed working conditions on employees without consultation, taking advantage of employee lack of power.
The answer is – unions. Employees have to band together to fight this Might is Right attitude!!
___________________________
The text above lacks paragraph carriage returns. Why? In the edit screen it shows paragraphs. I’ve taken extra care to do double CRs. Yet they don’t show.
I’ve just done a double Carriage Return. I hesitate to criticise free software (this is Word Press blogging software) but it’s FULL OF BUGS!!!! I’m pretty sick of this. I think they are trying to force us to move to the paid version. What a cynic I am.