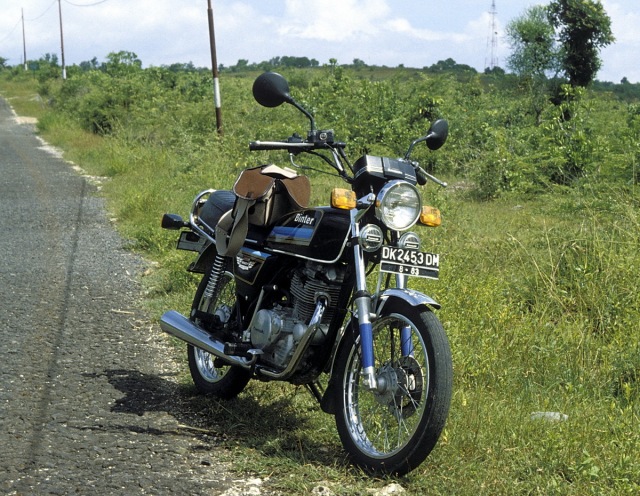 My Bali bike in 1985. Yes, on three trips in the 1980s, I rented motorbikes in Bali and survived without a scratch. No helmets required then. I obeyed the rules. (That’s my camera bag on the seat, and I’ve still got that bag 30 years later. I like it.) © PJ Croft 2015

Another amazing motorbike atrocity yesterday. I was coming home driving along the single lane section of Marmion Avenue. There’s a 2m bicycle lane on the left but nothing on the right except about 1m to the curb on the median strip.

I was doing about 60Km/h, accelerating. We were just speeding up to the 70Km/h limit after exiting the roundabout. But this wasn’t enough for the guy on a dirt bike a few cars behind. He gunned his engine and passed us on the right in that 1m gap between the cars and the curb. He was going at least 80Km/h (he was past me in about 1 second), his exhaust deafening.

I am tired of motorbike riders! They deserve any injuries they get, in my opinion. Just occasionally you see a rider obeying the rules, but it’s so rare as to be remarkable. Obey the law!

Damn, the bloody tax scam artists have got my number. Yes, I’ve had my first call from the “taxation office”. I let it go to voicemail, so I have it recorded: “This is Peter Jones of the taxation office. We have tried to contact you by mail but our letters have gone unanswered.” Bullshit. Plummy Pommy accent. (This guy must know he’s preying on vulnerable people – has he no conscience?)

And so on. There is a matter about my tax which must be answered. Well, since I don’t pay any tax (I have no income), there can’t be any matter to be cleared up.

It continues with a NSW number to call and a threat that if I don’t call it will be bad for me.

So we have the phone number. Why can’t the police or whoever follow up this number and take action against these scam merchants? How are they allowed to get away with it for so long?

I love planning trips, especially what camera gear to take. I’ve been telling myself to restrict it to just one camera this trip, but already I can feel that resolve slipping. 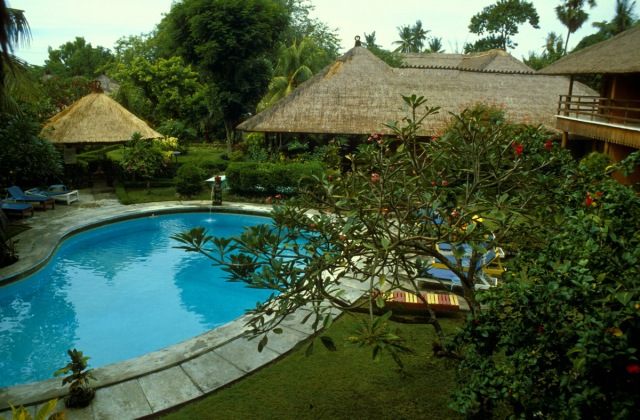 I stayed in this hotel, the Puri Dalem, in 1985 and it’s still there. I think I’ll stay there again for a few days this trip.

I saw the diabetic nurse educator yesterday. I was hoping to try a new drug that my GP had told me about (Jardiance), but the nurse wants me to modify my diet (cut the carbs) and see what happens.

However, I ain’t doin’ too badly. Yes, I weigh every day and note the figure in my expenses notebook. I admit it’s a bit OCD but it comes in very handy.

This isn’t so good, though:

The night reading, after food, is worse – I don’t want to show it.

At her request I’ve been recording everything I eat in a food diary for the past month. Boy, that’s tedious, much harder than weighing. But it shows so far that I’m well withing the recommended kilojoule allowance, and mostly below it. Hence the weight loss. Things seemed to change after the massive doses of antibiotic I had to take a year ago. I think this killed off a lot of my gut flora and food tastes different now. Many things taste bitter now. That doesn’t make sense, I know, but I just don’t want to eat some things I used to like. That’s good.

I use the Calorie Counter booklet put out by Alan Borushek. It was first published in 1977, apparently. I bought it then and I’ve bought a new copy every few years. Good book.

But boy, looking up the figures is TEDIOUS. Sure, some foods are repeated daily, but I still waste far too much time thumbing through trying to find how many kilojoules for my estimated weight of that item.

I was hoping there might be a downloadable spreadsheet of all the foods, but there doesn’t seem to be.

Therefore, idea: I think I might try to build a spreadsheet that allows me to just click on list boxes of the foods and the amounts and so automatically calculate the totals. It would be a lot of work, but I like doing that kind of thing. Watch this space.

Thinking about travel, insurance comes to mind. It’s noticeable that age 70 seems important, i.e. are you 70 or under? Not long to go before that pops up for me.

Disclosure of existing conditions too. If I reveal, will I be refused insurance, or attract a loading? If I don’t reveal, they could refuse to pay out. I think going to the USA will be out of the question for me. The travel insurance cost would be enormous. My earlier idea of round-the-world airfares seems ruled out: you can’t go around the world without going through the USA.

Well, actually, that’s not true. Go via Canada, for example. Hmmm. Must check that out.

Another contender for a cruise has popped up. The Queen Mary 2 goes from Singapore to London in April next year, via Malaysia, Sri Lanka, India, Dubai, the Suez canal, the Middle East, the Mediterranean, Cadiz and Southampton.

But it’s the Queen Mary! That means stuffy British rules. If I thought the Arcadia was bad when excluding me from every restaurant except the buffet, the Queen Mary wouldn’t even let me be seen in my sandals and shorts. I’d need a bloody dinner suit.

No, I’d love to do it but I think it would be much cheaper to fly, and stay in nice hotels along the way.