I’m beginning to wonder whether I should cancel Bali.

That volcano caused Virgin and Jetstar to cancel their flights today, although Garuda still flew from Perth on the 8am run. I wonder if they’re being crazy brave or if it’s really OK. I don’t want to test that theory very much.

The problem is, even though it’s a month until I fly, there’s no end in sight to the eruption. I’d take the chance, but I need to take out travel insurance very soon and that will cost a minimum of around $400 which obviously I won’t get back.

So I have to balance out the cost of the insurance against what I’d get repaid if I had to claim on it. So far all I’ve paid out is $525 for the Garuda return airfare and about $200 for the first four nights’ hotel. That’s refundable up to 24 hours before arrival. All my other four hotels are booked but you don’t have to pay up front and I can cancel now without penalty.

I’m assuming Garuda would refund if they won’t fly me. Better check.

What to do? I’ll think on it some more.

I had it in my pocket all day yesterday and it wouldn’t turn on when I looked at it. OK, battery has discharged, yes? Put it on charge, orange LED comes on, then changes to green after an hour or so.

Tried it again today but it’s dead as a brick. Take the back off, look for the battery, sealed – can’t get it out (not without removing tiny screws, anyway). Back on charger for a few more hours, green LED on, but still no go. Just won’t turn on. Tried reset button.

I am fed up! I’ve only had this phone about two months, $246 worth. I assume it’ll have a warranty but now I have to find the receipt and how to claim and pack it and post it. And what if I do decide to continue to Bali – I’ll have to race to get this sorted beforehand. Grrrr.

Three coffee machines, a model rail loco, a Solid State Drive, a pair of lens adapters, two successive Yamaha FM/DAB tuners, a lost mobile phone (yeah, not an electronic fault, I know) and now this. I think the rapid pace of electronics is too rapid for the quality control to keep up.

I was in Coles LiquorLand at Clarkson today and bought some beer. I was going to buy a bottle of gin but all the spirits were in locked glass fronted cabinets with no lighting. I was going to ask, but decided to move on.

I said to the girl at the checkout, “Bit offputting”, pointing at the cabinets.

I repeated, with a sharper point, “Bit offputting.”

“Well, I’ll go elsewhere”, I said. I still don’t think she got it, but I moved off anyway.

Almost finished my Me, Me, Me book (but that won’t be the final title). Just going through proof reading now. But I reformatted from an 8.5″ x 11″ imagewrap cover to a similar sized hard cover debossed last night. Arrrgggh. Suddenly all my type has changed from 10pt to 10.8pt and a lot of the text blocks have come up with overflow warning signs. Now I have to go back through every text block, shift it a little and reset it to 10pt exactly. 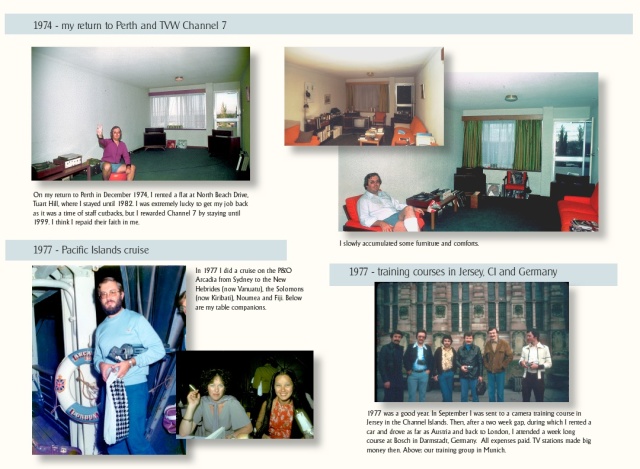 This Photobook software is good, but there are glaring deficiencies. You can’t do global changes is the main one, and lack of page numbering is another. But it does have dropped shadows, which I want, whereas other software doesn’t.