“A spare tyre round the middle of an otherwise average-sized body is more dangerous than being fat all over, research has shown.” Twice the risk of death. The Guardian 10/11/15

“Scientists have discovered a link between strong legs and a fit brain that resists the effects of ageing.” The Guardian 10/11/15

Sitting is the new cancer.

Improvements at Perth airport, the worst in Australia and one of the world’s worst, drag on, year after year. What a clunker of a design the international terminal is! To have to go to the upper level, then go down those ugly concrete steps to reach the aerobridge! What idiot designed that?

Ain’t that beautiful? It’s a new design for Beijing, and they’ll build it too. Look at Denpasar – they built a complete new departures terminal inside two years, and it’s great. Works perfectly. Except that I had to go down the stairs and walk to the plane (Air Asia) and up the aircraft’s stairs again while I was feeling so sick on the way home from China last year. Ugh! That was hard work. My cabin bag was the full 7Kg.

I’d asked for a wheelchair because I felt so crook, and I got it (late) in the terminal, but had to abandon it to get across the tarmac to the plane. That didn’t work well. But when we got to Perth, they were waiting for me and I had the wheelchair from the plane door right through to the outside. That was well handled by Air Asia Perth staff.

It’s our verge junk collection next week and Keith and Baz are coming on Thursday to help me put stuff out. Not that it’s hard: there’s only one large item, a folding table I  bought 15 years ago. It’s too big for the room.

I’ve been here 2½ years and already I’ve accumulated too much stuff! Unless I use it or really, really need it, it’s got to go. I’ve got to stop buying things!

It’s nearly time to stop using hot water in the shower. Each morning, I’m tempted to start the coldies for the summer, but it’s not quite warm enough yet. Soon.

Re saving water, I reckon one of the main culprits for long showers is liquid soap. You can’t rinse the bloody stuff off! I stopped using bar soap because it was so bad for soap scum, but it washes off very quickly. I might have to go back to it.

Memo Water Board: get onto the liquid soap makers and enforce a quicker wash-off. That would easily save 2 mins per shower.

I’ve said I’m a fan of Big Bang Theory, but even I’m getting tired of the repeats. Channel 9 seems to be repeating the same episodes only a week apart, plus Channel 7 is showing it as well, so sometimes we see the same episodes there as on Nine/Gem. I must admit I’m confused as to which is showing which, but the number of repeats is ridiculous.

I must admit I’m tiring of If You Are The One, the Chinese dating show. I’ve been watching it every night for the past year or so and it doesn’t have the charm it had early on with several of the girls who were really perky. It’s mostly a new lot now, and they don’t seem to be as lively. Oh well.

I’ve still learnt a lot about how the Chinese think, though. Looking after parents rates very, very high on the list. You might even need to live in the same house as the parents. No pensions there.

Damn. I got a flyer in the letter box last week from an ISP offering phone/fibre optic internet plans. Fibre?! I jumped at it.

So I got onto their web site and started a chat. Can they give me fibre at this address? (Otherwise why letter bomb me?) Result: Umm, er, don’t know, we’ll get back to you. That was last Thursday and they haven’t got back to me. Yeah.

Gone quiet on cars. I thought I wanted a CLK Merc but black outside, black inside. You can have silver outside/black inside, but that’s about it. Boring.

Then I saw an E350 coupe. Nice, and less expensive (3.5L V6 instead of a V8). But when I took a closer look, I was thinking, “This looks like a Toyota Camry.” C’mon, Mercedes, your styling has gone crazy.

One thing that’s come out is, “Don’t buy a 1990s Merc.” They used a wiring loom that was bio-degradable/recyclable, and the insulation disintegrates in the engine heat. Result – intermittent electrics and the cost of replacing entire wiring looms at Mercedes prices. Ouch. It’s OK if you know what you’re doing, but …

In fact the entire electrical system in Mercs before about 2000 is suspect. They are all prone to intermittent faults, even from things like being pulled too tight in a corner in the boot space, for example. BMWs are notorious as well.

When was the last time you heard of these kinds of problems in a Japanese car? I think maybe I should start thinking Japanese instead of German. The Lexus Soarer attracts me. And they come in different colours – white, blue, red, maroon, green, as well as black. Cheap now, too, less than $10,000 most of them, but nearly all are >150,000Km. That’s not frightening. If a good motor is well looked after 250,000Km is not unusual. 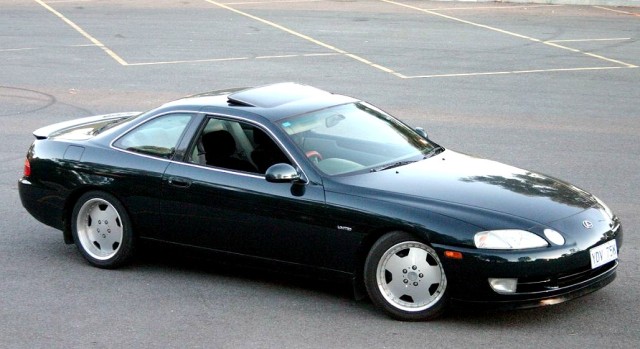