Hmmmm, the days are blurring into each other. What did I do yesterday? Oh, I know, I went to Aldi. I’m pleased to report that there was ample toilet paper at 12.30pm. I bet you’re relieved to hear that.

There was also plenty of food on the cold shelves too; no sign of the panic buying of a couple of weeks ago. Everything looked normal, in other words.

I just went there to buy a power board. Notice anything about this one?

Give up?  Look at the way the sockets are facing – inwards. It means that when you plug in anything like power packs, they interfere with each other. The only plugs you can put in are symmetrical ones which don’t protrude toward the other plug. Effectively, you can only have two plugs in at once. I’ve been putting up with this for about three years and I’ve had enough. Yesterday I bought this:

See how the plugs face outwards here? The reel above is going to get unreeled, the cable cut off and saved and the reel will be ditched. Someone made a blunder when they designed these. Maybe that’s why they were on special for about $10. I bought two. Wasted my money.

I’m not a religious person, in fact I describe myself as an atheist. But I recommend a show on Radio National (810AM in WA) called God Forbid at 6am on Sunday mornings. It’s hosted by James Carleton, who I had assumed is the son of the late Richard Carleton (but something’s made me doubt that. I don’t know at the moment.) He’s got a very rich voice and is very smart.

Anyway, it’s a religious discussion program but with a very big dollop of humour. The guests are very varied, from all religions, Christian – Proddies, Catholics, Mormons, Jewish, Muslim, you name it. The discussions are lively and good humoured and they even have a quiz with “buzzers” that will have you laughing.

As I said, it’s not usually my area but I actually look forward to it. If I’m awake, that is. I usually fall asleep again, but it’s also available on the RN web site so you can listen at a reasonable hour. I’ve actually learnt a lot from it. Recommended.

I have a doctor appointment at 2.30pm tomorrow at the medical centre. I want a face-to-face consultation, not a tele-medicine one, but I’m wondering how careful I’ll need to be. I’ll wear rubber gloves as I always do now, dishwashing gloves, but will I wear a mask as well? I think I’d better be safe than sorry.

I need a new referral to a specialist, a look at my left leg which is swelling up alarmingly with blood pooling, and to see if he got a report from the audiologist about my right ear. They said I need to see an ENT man about it.

Today I paid for a new program, Affinity Designer  https://affinity.serif.com/en-gb/designer/  This is one of a suite of three new programs, Photo, Publisher and Designer, developed by the British company Serif. They’ve set out to make alternatives to Adobe’s products which are notoriously expensive, even though Photoshop has become so ubiquitous as to have become a verb – to photoshop something. You can’t buy standalone versions of Adobe’s programs any more – you have to commit to an on-line version at quite a high fee per month, more than $350 per year I think.

The three Affinity programs have been halved in price during this pandemic and are now just A$38.99 each. For that you get a perpetual copy. It doesn’t expire, you don’t have to renew it each year. It’s yours. I’m a huge fan.

Yes, they are serious programs and there’s a learning curve but unless you use Photoshop every day, it won’t be hard to switch.

Photo is for image development and manipulation including painting, shown here.

Designer is a vector illustration program. 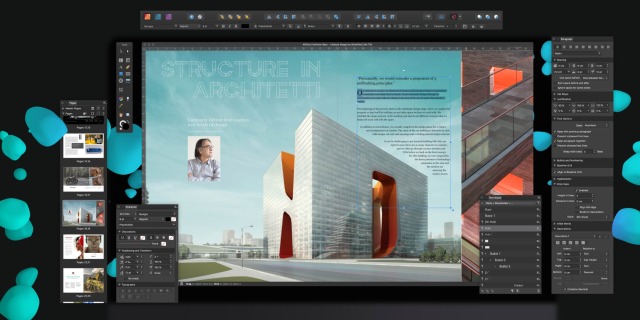 Publisher is a desktop publishing program.

All are top class, aimed at professionals but priced for all of us. Recommended. At the price, it’s not a big risk and you can get rid of your bootleg copies of the old stuff and be fully legal.