I  was speaking yesterday of female beauty and what defines it. I don’t think anyone at any time throughout history has been able to answer that question, but what I know is, I know it when I see it. I don’t know who this is, but I called this downloaded image Goddess.jpg. I think she’s a Perth woman and I hope she doesn’t mind me posting this here. It’s entirely complimentary. What a beauty!

24 October 2014: I swore never again after the March cruise, but an ad caught my eye in about August 2014 for a cruise that ticked all my boxes for where I wanted to go. It was greatly helped when I asked an old school mate if he’d share a cabin, as for a single fare it’s double the advertised price. He agreed. The itinerary looked fantastic. 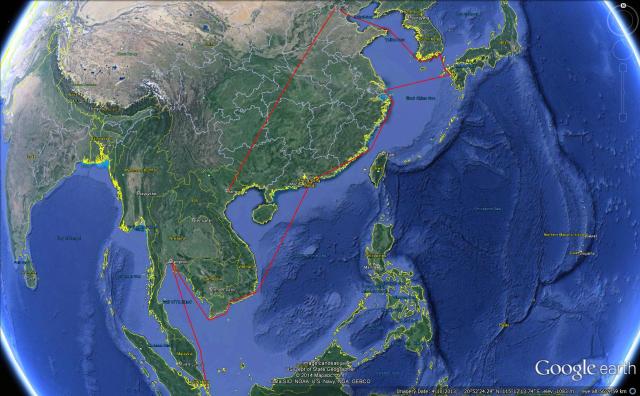 Fly to Singapore on Singapore Airlines, catch the ship, the ?? Princess and follow the red line. The name of the ship fooled me – if I’d known it was the same company as the March cruise I might not have booked. As it was, by the end of this cruise I blogged NEVER AGAIN!

I don’t know where I got it, but I caught some chest infection, in China I think, and by the end of the trip, when we reached Bali, I was reduced to sleeping for most of the day. I’d been to see a doctor while we were in Hanoi and he diagnosed pneumonia. He gave me an antibiotic and I guess it helped, but I just had no energy for the five days in Bali. What a disappointing end to the trip.

I blogged extensively about this trip, and you can see the entries from 24 October to 29 November 2014. I wrote a LOT! I won’t repeat it here but this was a great trip, full of interest, visiting some fantastic places that I never dreamed I would get to. My second visit to Hong Kong 22 years apart. Shanghai, then Beijing. Nagasaki – loved it. Busan in South Korea, but I felt too sick to go ashore. Then Hanoi! I never dreamed I would get there. I wanted to go because one of my cousins was the Australian ambassador to Vietnam so it was a great opportunity to see him in place. I loved Hanoi and would go back in a heartbeat (well, maybe…).

The cruise actually ended in Beijing and I with my friend’s approval, booked the flight from Beijing to Hanoi, the hotel there, then the flight from Hanoi via Singapore to Bali, Vietnamese Airlines all the way. Then five days in Bali to finish off. To be honest, I was looking forward to Bali almost more than any other part of that trip. It has a hold on me, as I’m sure others would feel too.

Again, no entry to the restaurants on the ship without being dressed up, with shoes and socks. I actually took some long trousers, shoes and sox but I hate wearing them and never bothered.

And again, I hated the crowds on the ship! There were roughly 2,500 passengers and everything involved long queues and waiting, waiting. Going ashore was incredibly expensive, all the bus tours costing upwards of US$100 at least. So if you count eight port stops, that’s at least US$800 = A$1,100 on top of the cruise fare of about $2,200. Not me.

One good thing was that I booked with the same travel firm in Perth who stuffed up my March cruise by not passing on my payment. She had said I would get $200 off my next booking, so this was it. I held her to it. She sounded a bit glum when she said that was their profit margin. Well, I’m sure she learnt her lesson to be more careful.

I’ve mentioned that I’ve had notification from the Water company that I likely had a water leak as my readings were so high. I knew the ball valves in both my toilet cisterns were hissing a lot so I fixed that problem and thought that was it. I stopped looking.

Then on Monday I cleared some very luxuriant weeds away from near the water meter and found the ground was saturated. Uh oh.

Today my lawn mower man came and did the big cleanup. He remarked on how wet the soil was and got his spade out. He found a T-junction feed off the main water pipe into the house, this T-junction leading to the professionally installed reticulation. There is a metal stop valve there, luckily, but that has a brass fitting that mates to the PVC piping for the retic. This joint had worn through and now that it was exposed, at full pressure, it put up a spray at least 3m high. It was a big leak, in other words. So he turned the stop valve off, to fix it temporarily and he’ll come back and do a proper fix in a week or so. He charges much less than a plumber so that will be a relief. He asked for $30 for today but I had expected $50 so I gave him that and said thanks.

From my garden just now. Dinner tonight? Lime and chillies? It’s hard to use these things.