Winter? The temperature reached 24.4degC yesterday! No wonder I was feeling too warm in my Sloppy Joe. I was feeling a bit of perspiration.

Wow, the days are mounting up since I started writing this blog as if it were a diary during this pandemic. We were taken by surprise, weren’t we? My group were planning a reunion on the 6th of April and I recall we debated whether to cancel. Well, events moved so fast that the decision was taken out of our hands: the self-isolation period began soon after in March and we were locked in for a few weeks.

But thanks to good management by the state government, I read a description of Western Australia as having “eliminated” the virus, like New Zealand has. Having the hard border closures has worked and although it’s caused a loss of tourists from the east, I think that’s better than having a high death rate.

Billionaire Clive Palmer is shouting his mouth off and taking WA to the high court because he’s not been allowed entry to WA. But entry is allowed to “essential” people. He might have business interests here, but I don’t see that his interests, no matter how important he thinks he is, override the safety of people here. Rack off, Clive!

I did go out yesterday, for a long drive in the MX6 along the freeway to Altronics in Balcatta (everywhere’s a long drive from here )-: ). That is an enjoyable car to drive. The four wheel steering makes the steering so sharp and precise, and the low shape makes it grip the road so that you look forward to twisty bits. But the cruise control is much more fiddly than the Mitsi Verada and the brakes need a hard push.

But I’ve got to sell it. I don’t need three cars and I’ve had my fun with this.

Anyway, I went to Altronics to buy an ESR meter. What’s that, you say? ESR stands for Equivalent Series Resistance. Huh? It’s a characteristic of capacitors, electrolytics mainly. Huh?

A capacitor (sometimes incorrectly called a condensor) is a very simple device: it’s just two conducting (metal) plates spaced apart, with a dielectric between them.

When a voltage is placed across the plates, electrons are attracted to one side and positive protons to the other side. This results in a charge of energy being stored in the dielectric substance between the plates. The dielectric can be just air, or in the case of electrolytic capacitors, it’s a chemical compound.

Because there’s no physical connection between the plates, direct current is blocked. But when alternating current (AC) is applied, energy is stored and released in the dielectric on each cycle and so the voltage on one side will appear on the other plate. So a capacitor blocks DC but passes AC. The better the dielctric and the bigger the plates, the better it works to pass AC. 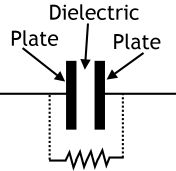 But as a capacitor ages, or just because it’s being a bastard, it can develop an effective DC path between the plates, shown as a resistor above. This is known as the equivalent series resistance, ESR. This is a bad thing. If we can measure it, it shows the quality of the capacitor. The higher the ESR reading, the worse the component. 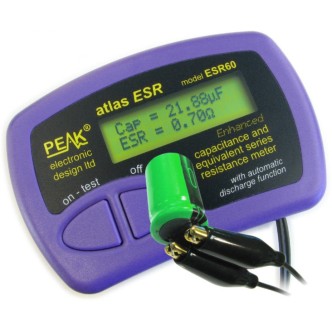 This is what I bought, shown measuring an electrolytic capacitor with its value and ESR.

I got it home and started checking the electrolytics on the analogue power supply board out of the SACD player. Bingo, within five minutes I had found a 220μF 50V cap that measured about 20μF with an ESR of >40Ω. Clearly faulty. You do the checks in circuit, without needing to unsolder the component. That’s the way we like it.

Unfortunately I don’t keep electros in my spares kit so it will have to be tomorrow before I can buy a new one. This is only one board – there are hundreds of caps that could be checked. It’s nearly always the small values that go faulty.

In fact, back in the ’90s at Channel 7 we used to have masses of Sony equipment. A lot of it became notorious for developing faults due to these small value electrolytics going bad, so much that one of the trainees was employed for months and months doing nothing but replacing all these capacitors on all the boards out of Sony gear. I think Sony had used one manufacturer’s components and it turned out to be a bad lot. There were literally hundreds of them. We didn’t bother testing them, it was quicker to just replace them en masse.

In fact, that’s a thing in electronics servicing: many times it’s not worth spending time unsoldering and test each component in turn based on your analysis. It’s sometimes better to just say, “F..k it, just replace the lot.” It’s the time that costs money, the components are dirt cheap.

Next job will be to replace the laser in the SACD player. Luckily the service manual was up on the web so I’ve got the full instructions. I’ve had to crop the page because the same instructions are in Japanese on the right of the diagrams. It’s beautifully done.

By coincidence, SBS showed two episodes consecutively of a documentary called “Einstein and Hawking” last night. I watched all two hours of it but I wouldn’t recommend going out of your way to see it. It wandered around a lot and was a bit superficial and showed many of the same graphics and animations repeatedly.

But it was historic in the sense that it showed Hawking as he was, along with contributions from several great physicists of today such as Kip Thorne (who’s old enough to have worked with Einstein), Brian Greene and Sean Carroll. There was some footage of Einstein but not his actual voice.

I’m in the closing stages of the biography and in the years after 1945 and the bomb, Einstein and others were in effect trying to put the genie back in the bottle as they saw the frightening potential of nuclear weapons. Einstein strongly advocated a supra-national world government with command of its own armed forces, so that no one nation could dominate others. We all know how that turned out.

Russia was the problem then, as it still is now. After WW2, they were starting their takeover of Poland and Hungary and the other eastern European countries, forming the USSR. There was never any hope of Russian ceding any power to any so called world government. Nor, as long as the USA had the bomb, would they ever have taken a subordinate role. Einstein’s views were hopelessly naïve. As history has shown.

Speaking of being hopelessly naïve, our esteemed Liberal Party treasurer Josh Frydenburg has shown us his stupidity this week. On Sunday he said he is an admirer of Ronald Reagan and Margaret Thatcher and their policies.

It’s hard to believe someone in his position can be so out of date. Reagan was a big spender, mainly on the US armed forces and there’s no doubt that he forced the collapse of the Soviet Union. But in doing so he massively increased the US government debt, lowered taxes for the rich and effectively stopped wage growth for ordinary wage earners. He led at a time when monetarism and crackpot economic theory dominated. He’s not regarded as a good economic manager. no matter how much the weapons hawks love his memory.

Thatcher’s ideas have also been discredited by now. She was a believer in austerity, in cutting the size of government, reducing government services, persuading people that they needed to stand on their own two feet and help themselves. She is infamous for saying, “There is no such thing as society. There are only men and women and families.” Which was a roundabout way of saying, it’s up to you to look after yourself, don’t expect government to look after you.

The problem was her policies meant that London and the SE of England got all the help they needed and became very well off, while the north and west of the UK went downhill, with factories closing, jobs disappearing, council services being cut and poverty rising.

The effects of this are still being felt and probably contributed to the north of the UK voting for Brexit.

So Reagan and Thatcher are regarded with contempt by most economists (and me) now. For our treasurer to come out and say he admires them is like saying we need another Adolf Hitler to sort out the race problems of the world.

So, terrific: we have a prime minister who believes in a real God who does miracles just for him (a religious nut, in other words), who refused to listen to 20 fire experts who warned him of the bushfires long before they happened, who went on holiday while the east coast was burning, and was just as cruel to refugees as Dutton is now. And a treasurer who believes in ghosts, who listens to dead people and admires crackpot economics.

Oh, I feel better now. Relaxed and calm. Not.

Unfortunately the MyHeritage website blocks me from doing any more photo enhancements with their magical software unless I sign up and pay for the top level. That’s about $240 for a year’s access. It’s too expensive.

I’ve tried Topaz Sharpen AI but it’s nowhere near as good and it’s mostly manual. It doesn’t do as good a job and it’s too slow. That costs US$60.

That leaves PhotoGlory. I’ve given it a brief try and it seems to also be mostly manual, so it’s time consuming. That’s only $20 so I might have to go with that.

I wish I knew what MyHeritage are using because I am mightily impressed. Also, if I did pay the money for a year’s use, would it allow me to fix my full sized images, or would it only produce reduced sizes suitable only for web pages? I could ask, I suppose.

I’ve just had a phone call from DHL Startrack, the couriers, about collecting the Lenovo laptop. They were supposed to email me to arrange a time yesterday week ago, the 20th, but they didn’t. I asked Lenovo to give them a poke and next day I got the email with the labels and an arrangement that they would come on Thursday 23rd. They didn’t, and then I got a phone call from Lenovo that afternoon to arrange a time for the next day, Friday 24th. Again, they didn’t turn up!

Yesterday, Monday, I thought they might come, but no. Today? No. Now I’ve had a call from them wanting to arrange it for tomorrow, but I’ve got an appointment at 10am so no. Now it looks like Thursday.

I’m sick of this! I’ve had trouble with DHL before. One time I was waiting on a parcel delivery at the Trigg house. I waited all morning but nothing came. Then in the afternoon I found a card inside my front screen door saying that they’d knocked and no-one was home. Bulldust! I was home there was no knock. My car was in the carport.

They took my parcel back to the depot near the airport in Welshpool. Grrrrr. On a wet, stormy Friday afternoon, I had to drive to the international airport, find their premises and collect my own package. I was not happy. I wouldn’t use DHL. They are not reliable.