My first loco arrived last week. It’s a Japanese Kato brand. It’s only DC at the moment (i.e. it runs on a 9V battery or whatever), but I’ve ordered a drop-in DCC decoder to make it run on 16V ac digital power. Although it’s USA livery, I’ll repaint it to a more WA colour scheme. I’m pretty sure similar locos are used here.

First, I read a brilliant little piece the other day:

A rich man, a poor man and a workman are sitting at a table. There’s a plate of a dozen biscuits in the centre. The rich man grabs eleven of them and says to the workman, “The poor man needs your biscuit.”

Exactly. Precisely. This is confirmed by the Australian employer groups always trying to apply moral pressure to unions in Minimum Wage pay case negotiations every year, saying that any increase in wages may lead to job losses. This applies at any time, whether the economy and business conditions are going great or not. Even when the ACTU and unions are only trying to get another $10 a week on the minimum wage, the employers try to deny it. This is sheer cold blooded selfishness.

It’s also confirmed by the latest news: by next year, 49% of the entire world’s wealth will be in the hands of the richest 1%. But that’s not enough. They still want more and more, and they’ll do anything to get it, including tax avoidance (which is legal but immoral), tax evasion (which is illegal and even more immoral), hidden bank accounts, using hidden offshore tax free banks and any other means they can think of. And they flaunt it.

I know two people: one practices tax avaiodance and boasted to me in January 2011 that “I paid no tax last year, it all goes therough the (family) trust.” He is so captured by the belief that he’s a finance guru that he expected me to applaud him.

Well, he also flies to Bali about once a month to “do maintenance” on a villa there which he hides in a tax sheltered scheme. He drives on the roads, he flies from the airport, he goes through Customs and Immigration, he relies on the air traffic control and the weather prediction service, he relies on the Dept of Health to guard against diseases and epidemics … the list is endless. All these are taxpayer funded! But he doesn’t believe he should have to pay any tax! He thinks it’s clever to avoid tax. I kept a straight face in order to keep the peace, but I fume.

I was speaking to another guy recently, a retired business owner. He resented the 9% employee super levy and all forms of government regulation. He implied that he has problems with the ATO over his tax. I wonder why. His whole speech was a tirade against authority – how he was only trying to be successful, i.e. make money for himself, and everyone was putting obstacles in his way. I told him we have no common ground and I didn’t want to talk to him again.

Read about Thomas Piketty. He has exposed the huge shift of wealth in this society from the poor to the rich over the last century, and the pace is accelerating. It is actually true, the rich are getting richer and the poor are getting poorer. It’s being pushed to the fore by the last budget of this awful Liberal government in Canberra. All the burden is falling on the less well off and the rich were untouched.

I truly believe that the message, that you will not get away with evading tax, will not get through without the practitioners having to live in fear. Nothing else works. The super rich must be made to fear their attempts to avoid paying their way. Nothing else we have ever tried has worked. Vive la Revolution.

I’m going to have to have the gastric bypass operation. I can’t go on like this. I can’t do anything any more. Even walking around the shopping centre is an ordeal. I tire so quickly. I can’t enjoy walking any more. I used to.

It’ll cost $6,500 nett, after HBF but no Medicare for this. It’s considered cosmetic surgery. It’s not optional to me.

That means I’ve wasted another year, after chickening out last year. Damn.

However, the incentive is that I want to do another trip to the UK to visit Croft Castle, while I still can. I had a vague plan to make a re-run of the 2008 trip in Setember and October this year. But an ad has caught my eye this morning.

The cruise ship Astor makes regular cruises between Fremantle and London but the route going there is via South Africa and the west coast of Africa. No thanks, not for me. I will never go near Africa. No interest.

But this morning I find they’re advertising the return trip: London back to Fremantle but around the other side, via the Caribbean, Panama Canal, the Pacific Islands, Auckland, then Sydney and Fremantle. That’s more attractive to me. It’s 53 days, a long trip, but with 11 stops, not too bad. And the Astor is a small ship, only 850 passengers vs the 2,800 of the last two I’ve been on. I’ve heard good reports about it.

They’re advertising cabins with “2nd person free”, meaning one price for a two berth cabin, no single supplement (that’s my reading of it, anyway). If I could find a travel partner to share …  Something to think about, anyway.

Another new plan out of a magazine: 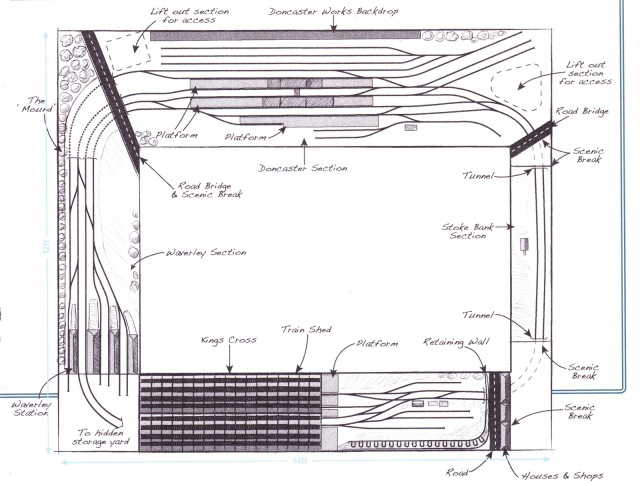 Although this is drawn as a square, the bottom left coner is actually open. Therefore the three sides can be opened out and bent around my L-shaped boards, I think. Waverly on one leg and King’s Cross on the other, with Doncaster in between. I actually travelled this route in 2008 on a high speed train, so I know the stations.

Waverly Station, Edinburgh. That’s a road bridge across the top. I’ve driven across it several times (‘cos I was lost!)

The more time I spend on this model railway, the more I realise I need to learn and plan before I commit to sticking down track. The good thing is that the more I read, the more it makes sense. I’ve been re-reading torn out articles from months ago and although they seemed to be fairly straightforward then, they make even more sense now that I’ve read other theory articles. It is very complex. This is a multi year project, something you never finish. The electronics alone is formidable, but that’s what I like, of course.

I think my plan up to now is going to be abandoned once again. It’s aimless. I’ve found another plan (above) in a magazine. Although it doesn’t go around an L-bend as shown, it’s much more interesting and is a going concern. It actually includes Waverly Station in Edinburgh, where I spent a good few hours in 2008 – the hire car depot was on the platform. (You have to drive down, off the bridge onto the platform. This had me bamboozled at first. I had to stop the car on the bridge and phone the hire company for instructions.) I’ve seen a couple of articles about modelling it and it looks fantastic. Having sen and experienced it makes it all the better. I know what it looks like with my own eyes.

It would also solve my problem of what country to model. I wanted to model Australia, of course, preferably Perth and/or the NW iron trains, but there’s almost nothing available in N-gauge for Australian models. The overwhelming majority (>95%) are UK or USA. It seems wrong to be modelling the UK out here, but there’s not much choice.

I think I’m also going to have to buy one of these:

That’s a touch screen display, with motor driven speed wheels on the sides (ie they rotate to show what speed the loco is going). Made in Germany. And this:

That’s a wireless touch screen remote about the size of a mobile phone. I want it!

But there are many, many more hours of planning to be done. I’d just be bored otherwise.