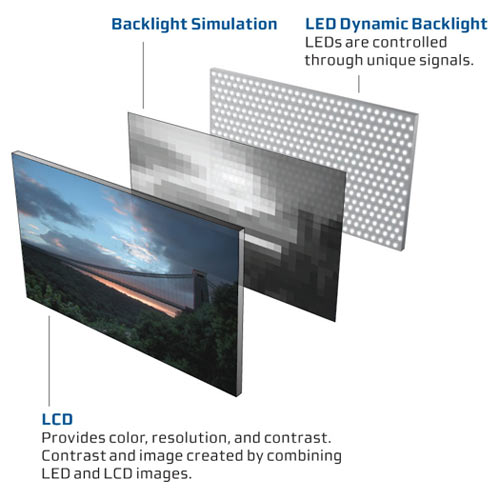 A few years ago, maybe 2010 – 2013, I was telling friends that the newer LED backlit TVs were able to modulate the brightness of the LEDs to adaptively enhance the contrast.

I don’t know where I got the idea from, but after a while I realised that I was wrong, talking out of my hat. (But I kept quiet about it, of course, heh heh.)

Well, it seems I was ahead of things, not wrong after all. Dolby Laboratories in the USA has come up with a new technology called HDR TV:

“An HDR [High Dynamic Range] monitor has better black levels, but the primary difference is selective backlighting, where thousands of LEDs behind the LCD panel can be individually turned on to provide extremely bright backlighting exactly corresponding to the highlights in the image. All of this is only at the prototype stage but Dolby assured us that they’re working with several partners well known in the industry.” [Red Shark web site]

I was right after all. I don’t remember reading anything about this in 2010 – it just came into my head. I should have patented it. 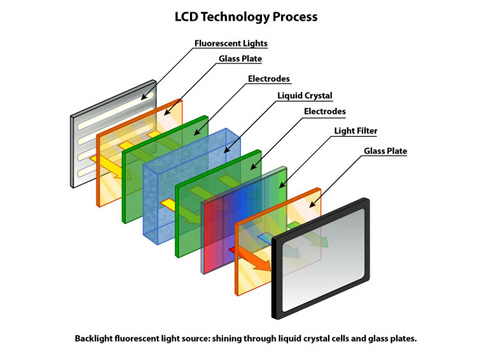 This is the old style backlighting using fluorescent tubes. My TV is still of this type. 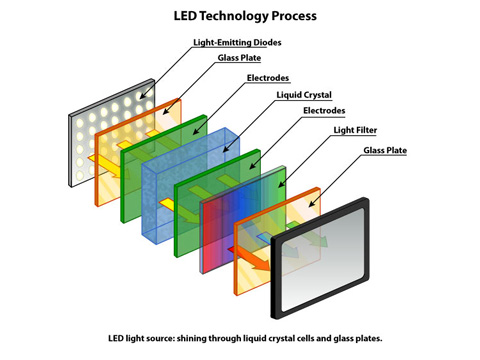 The rear-most layer is now white LEDs instead of fluorescent tubes. Much thinner and cooler.

TFT means Thin Film Transistor. Do you realise that for every red, green and blue pixel on your screen, you are actually seeing the backlight coming through transistors that are so thin they are transparent? On the inner layers of an LCD screen is a mass (millions of items) of electronics that is transparent!  Every piece, smaller than a hair thickness, is absolutely precisely placed and has to work perfectly.

I always marvel at the comparison I make here: a set of curtains for a large lounge room will cost many hundreds of dollars. A good quality lounge suite will cost $3,000 to $5,000.

But your TV, this marvel of precision technology with all its thousands of manufacturing steps will cost less than $1,000, usually much less. Where’s the value??!! Why should we pay curtain makers the same as a TV for a few hours cutting and sewing. Why does the material cost so much when it is churned out in huge rolls at minimal cost by big machines in a relatively few steps?

“In the climate debate, the consequences of doubt are likely to be global and enduring. Climate-change sceptics in the United States have achieved their fundamental goal of halting legislative action to combat global warming. They haven’t had to win the debate on the merits; they’ve merely had to fog the room enough to keep laws governing greenhouse gas emissions from being enacted.”

Lord Abbott SC VC KCMD OA AO has pronounced that “Climate change is crap” and despite every opportunity, has not retracted or modified this view. He advocates coal and coal mining as the energy of the future, regardless of its polluting and contamination of rivers, coastlines and oceans.

I wonder what he’s being paid?*

Along the same lines, before the 2013 election, our Tones promised that large areas of Tasmania’s forests, including areas in the World Heritage List, would be released for logging by timber companies.

The United Nations immediately condemned this as unacceptable, but he ignored them, of course.

Now it’s come out that two of his ministers asked for any decision to be delayed by six months for further discussion, as did the timber companies. But that doesn’t bother Lord Abbott – he’s proceeding regardless. And it’s come out that he made another “captain’s call” in November 2013, giving the go-ahead to the Tasmanian Liberal government without any cabinet consultation.

As I said, I wonder what he’s being paid?* Should be a nice little retirement nest egg, eh Tones? 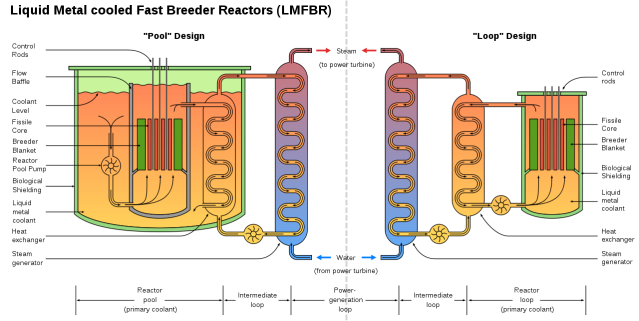 That means we will be able to say to Britain, France, Japan and other countries, “We’ll take your nuclear waste fuel rods, thank you very much, and here’s fresh uranium from our mines to replace them. Ka ching! That’ll be $X billion dollars, please.”

The speaker said he believed the foreign companies would pay for the new fast breeder reactors to be built here, simply because it makes economic sense to do so. Cheaper than storing their waste at home for millennia.

He said each reactor produces around 320 MW (that’s megawatts, millions of watts). That’s a big power generator, and it’s atmospheric greenhouse gas pollution free! Combine that with the wave power I mentioned before and the move to solar panels for homes and we’re talking ample power, atmospheric pollution free, very low cost, totally reliable, for centuries to come.

People jump up and down about the dangers of nuclear power, and how the waste is toxic for millennia. Well, that was last year.

Technology and science don’t stand still. There’s a new type of fission reactor called a Fast Breeder Reactor (not the best choice of name, methinks), which uses existing nuclear waste as its fuel. It can pass this old fuel through again and again, nearly 100 times, gaining energy from it each time, and the final waste product, although still radioactive, will decay in only about 300 years.

As well, these new reactors use a different type of cooling (liquid sodium) that is inherently fail safe. If the cooling process goes faulty or is shut down, the reactor just stops. It can’t overheat or explode. (Where will that much sodium come from? Salt is sodium and chlorine. It’s easy to separate them. Salt is fairly cheap and abundant, wouldn’t you say?)

People should find out the facts before they pronounce on things like nuclear power. Or phone tower radiation. Or wind tower health effects. Or power lines. Or vaccinations. There are an awful lot of idiots polluting our discussions.