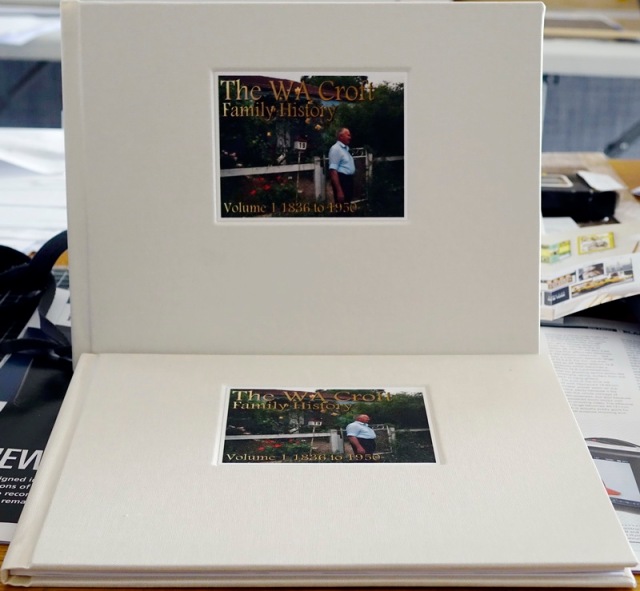 Et voila! Ordered last Thursday 19th and both copies arrived together this morning, six days later. Not bad is it? I compose here on my desktop, send the result electronically to Melbourne (takes about 30 mins), the files are then sent to Shah Alam, near KL, Malaysia, the books are printed and shipped back to me within six days. Payment is electronic too. Amazing stuff.

I suppose in 20 years’ time even this will be considered slow and clunky. We’ll have one of these “Print on demand” machines at home – files in one end, bound book out the other in 10 minutes or so. I’m beginning to sound like an old man.

I’m working on Vol. 2 now, covering the Bruce Rock years. What a pity my siblings will have no say in what I put in or what I write, as they have ruled themselves out of my life. They no longer meet my standards. They will never see the result or be able to show their children. This is family breakup in vivid colour.

The United States continues to repel me. In the Guardian today, a woman has been released and her conviction quashed as wrongful after spending 22 years in prison, on death row no less, for a crime she didn’t commit. I made the following comment to the article:

22 years on death row? Then found to be completely innocent? The US Constitution prohibits “cruel and unusual punishment”. By any standard, these cases of wrongful conviction and, effectively, life imprisonment, with the prospect of death at the end, are cruel! What does it take to get US courts to abide by their own constitution?

In any case, if the death penalty worked, why are murders still committed? The death penalty in the USA, “land of the free “, is just revenge. The USA lines up alongside China, Saudi Arabia, Syria, North Korea and other bastions of democracy as one of the last of the most barbarous countries on Earth.

A Republican ( = Liberal Party, hard right wing in philosophy ) bloke in the US has just announced that he is a candidate for election next year for President. He announced it at the Texas Christian University, and proceeded to invoke God’s blessing on America and himself. Then he pledged to strengthen the gun laws so that all Americans will be able to bear arms, if he is elected.

This is a sick, sick country. I will never go there again. I didn’t feel unsafe when I was there nearly 30 years ago, but I would feel unsafe now. No thanks. The USA joins the list of countries I will never visit.