I had trouble sleeping again last night so at 2am I booked some more Bali accommodation. It was probably not a good time to be making decisions like that, because I’ve booked one hotel for eight nights (to cover a gap in the S’Cape condotel’s availability), where the booking is not refundable. The amount is $403 for the eight nights, and it’s not payable until I get there, but it wasn’t until I’d booked that I saw the fine print that says the entire amount is non-refundable on cancellation!

This seems unreasonable to me. I can understand forfeiting one night, but not the whole amount. I don’t expect to cancel, but you never know. I might have to make a protest to Booking.com about this.

I’ve actually booked for most of May, then for the whole of um, another month (I don’t want to tell the world when my house will be empty). That should either kill or cure me. I’ve heard from someone who’s stayed at S’Cape that it’s good, so … The location is one of its plus points.

I’ve never had this trouble before. I don’t download movies or other big stuff, except for one software download of 5GB. Damned Windows 1o tries to download itself at 2GB a time when I’m not watching.

But I think the culprit is Dropbox. It’s uploading my images at the moment and I don’t know why, or how to stop it. (I’ve tried yelling at it.) More investigation needed.

Update: fixed it. Always explore the menus and settings. 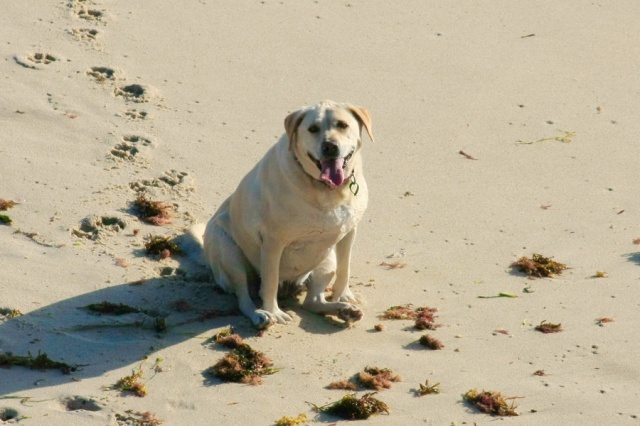 Minnie 2007 at Trigg beach. I called her the Surf Dog. She was fearless, crashing through the waves after the tennis ball, never giving up.

I watched the British TV program called Ultimate Hell Week, a series where an initial group of 24 civilian volunteers put themselves through a military style training and selection process. It was based on the special forces programs from the UK and Australian SAS, the US Special Forces, the Israeli Commandos and the Philippines equivalents. Each week was conducted by one of that list.

Wow, what an amazing test of their stamina and perseverance. They were amateurs and one guy was 51, competing with 20-30 year olds. He was eternally cheerful but ultimately he couldn’t keep up and was scrubbed, but he was still smiling after that. Good guy.

One example was that after 3 mile run with a 20Kg backpack and a 4.5Kg rifle, they were so exhausted that they fell to the ground when they got back. But the instructor said, “OK, give me 100 burpees, now!” A burpee is where you start as if you were going to do a push up, but have to jump up and clap your hands above your head, then drop to the push up position again. Repeat 100 times when you’re already exhausted to dropping point. But they did it. Amazing.

[I was thinking, 20Kg? That doesn’t seem like much. But then I thought, that’s the weight of my suitcase when I’m travelling, and I can hardly lift it. Gaaah! That reminds me, how about in TV shows and movies where the stars are shown lifting and carrying their suitcases as if they were empty. Funny, I bet they are. No-one is ever shown grunting when they lift and carry.]

As they say, your only limit is what your mind and heart tell you, not your body. If you have the mind and the guts to push on no matter what, your body will follow. This is what they teach SAS men, to keep going, no matter what.

The eventual winner was a real surprise. It was a 33 year old (I think) female doctor. She ran marathons as a hobby and she was skinny and wiry. She absolutely struggled to carry the heavy loads because of her small size and lack of muscles, but she just kept going, no matter what. In the end, she beat one other woman and the other 22 men. She deserved it. I enjoyed this show.

As for Bear Grylls and the American men on The Island, bloody hell, do they ever stop talking? And loving each other, man, and high-fiving, and saying how great it is, man? But they’re not very resourceful, considering the talent they have available. They’re pretty unsuccessful at finding food and fishing. I’m watching it, but I get sick of it.