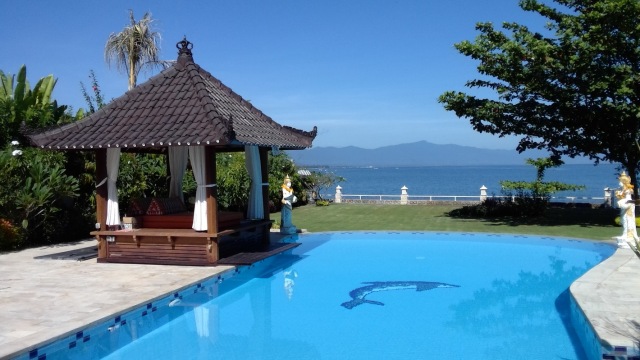 The villa at Pemaron, looking west on a very clear morning this morning. (C) PJ Croft 2016 Taken with my Samsung tablet PC camera. 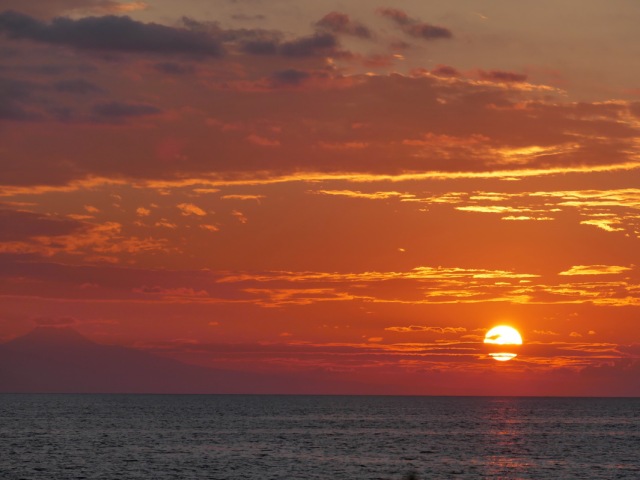 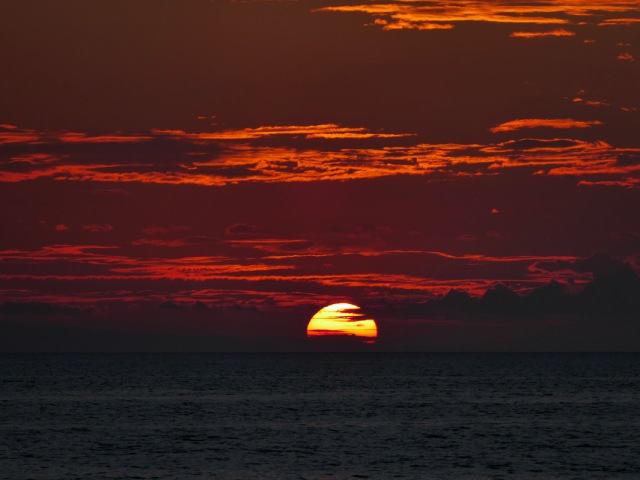 It was a glorious full moon last night, very bright, almost enough to get moonburn in the clear, cool night. We swam late and I never thought I’d be cold in Bali, but I was shivering in the cool air when I got out.

This morning the air was still very clear as shown in the top photo. V pointed out that you can actually see the volcanic mountains of Java to the west. The big one is Gunung Merapi. Even from here, about 90km away, it looks huge. 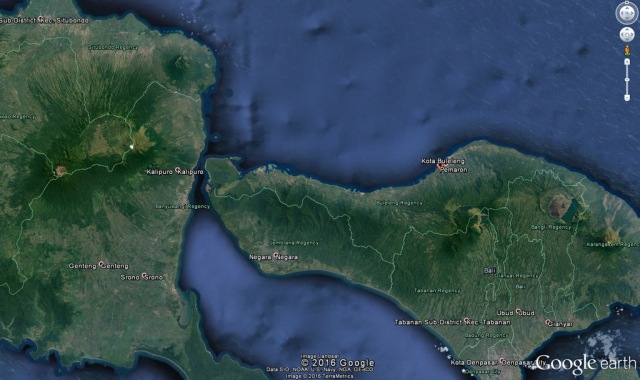 The white spot to the left (west) of Kalipuro is Gunung Merapi.

The closer mountains, just across the very wide bay, are 30km away. What a view to wake up to each morning. The weather is beautiful, cool in the morning, warming up to about 30C in the middle of the day, but there’s often a cool breeze from the east and it’s quite low humidity. This is the dry season. It’s rained a few times, but not much. I miss the thunder and lightning of the wet season, though.

We made the short drive to Singaraja yesterday and I took the opportunity to look in a rather scungy computer shop while V was off doing something. What did I find but a card reader that was clearly labelled SD High Speed UHS-II.

This is what I’ve been lacking in order to read the files off the card from the Panasonic FZ1000 camera. I had a good Sandisk one, costing about $36 I think, but it failed mechanically (i.e. the card just falls out, the contacts have lost their grip). I tried to buy a replacement just before this trip, but the price in a Perth shop was $89.95! I recoiled and said I wasn’t going to pay that.

When I got home, I webbed and found it, the same device, for $36.60, the price I paid a bit more than a year ago. I emailed the shop and queried their price. They brought it down to $59.95. Gee, thanks, but no thanks.

So yesterday I wasn’t sure whether this odd brand card reader would be suitable and asked the price. Rp65,000. That’s A$6.50! Kerrrumbs, even if it didn’t work, it wasn’t a big risk. So I bought it and bingo! It works great. Finally I can get all my images and video off the camera. Those sunset ones are some of them.

Indonesia’s a funny place for prices. Some things are amazingly cheap, such as the above, but other things, such as muesli at $7.50 for a 500g bag are very expensive. A loaf of sliced brown bread was $1 yesterday. It’s nice bread, but it tastes so sweet. They add sugar to everything.

They had a sugar free wholemeal loaf but it was frozen whole. You’d have to defrost it to slice it, and it was $3.50. I went for the $1 loaf.

Hardy’s also has a big gourmet food shelf with all you need for canapes and cocktails. Beer is very cheap, but foreign and Australian wines, eg at an average of $40 a bottle for Rosemount that I’d pay no more than $15 for at home, no thanks.

Then we drove to Lovina and had a look at the beach and jetty. There are two yachts moored offshore, a single master about 15m long and a two master about 30m long. A guy told us that they’ve effectively been abandoned. The single mast is old and decrepit, and the engine has failed in the big one. Apparently the owner has left it there for more than a year. I offered $5 but the guy wanted to haggle  🙂

We had drinks and dinner in a beach bar, and with a beautiful sunset, it was fabulous. But the strong breeze died almost as soon as the sun went down. It was very noticeable. Then the band started playing and although it was great music, it made conversation almost impossible. Combined with the constant noise from motorbikes, we had to finish up and leave.