BRRRRR!! I’ve always said August is the hardest, coldest month of our winters and today is proving it. The max is forecast to be only 15degC and I think it will struggle to make that. The temp in my house was 14.7C when I looked at about 11am. Of course, if I closed the patio door it would help (done now). And I’ve got the air-con on reverse cycle, so it’s nice inside now, even though the rain is steadily coming down.

The MX-6 is up on Facebook Marketplace now and wow, there has been an amazing number of enquiries. 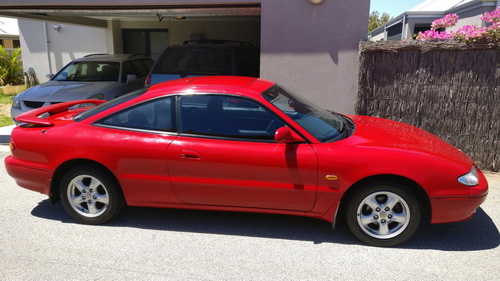 At last count, 27. They came thick and fast – I only listed it at about 5pm yesterday and I had 12-15 enquiries within three hours. That’s the good news. The bad news is that not one of the enquirers has followed through (one has now, see below). Most have asked if they can come for a look and I’ve provided the address for half a dozen or so, but no-one seems to be doing anything about it. I ask them to text me for the address and I spell out my phone number to avoid skimmers, but many can’t seem to read and want me to put the actual numbers up. No. I put my email address up in these messages a couple of years ago and I’ve been plagued by scammers and porn ads ever since.

One guy seems especially keen, but wants to wait until Wednesday to come here and wanted me to hold it for him. I said I can’t do that, if anyone offers me the money, then I’ll have to take it.

It’s amazing how people don’t read the ad. Even though it said, “I’m in Butler”, people keep asking me where I am. It doesn’t help that Facebook places me in Canning Vale, I suppose.

I was expecting two guys to come this morning – I thought we had appointments, but neither has turned up or messaged or texted. What’s wrong with these people?

At one stage last night, I got a F/B link to my ad that had been shared by someone and all they wanted to do was pour scorn on the car and how bad they think it is. What??!! I let them have the thick edge of my tongue, I can tell you. There are crazies out there.

Aaaah, the federal government, that is the PM and the Attorney General (my local member, by the way) have withdrawn the government’s sup[port for Clive Palmer’s High Court case to force WA to open our borders. Hah! They must have realised the depth of feeling in WA against fat Clive and his selfishness. Plus the damage this was doing to the Liberal Party.

I think the damage will linger, regardless of their withdrawal. People have long memories for something like this. Our premier and the Labor Party are so popular and highly regarded for their handling of this virus crisis that I think we are going to fare well in both the forthcoming state election, due in March, and the next federal election, not due until May 2022 unfortunately.

The prime minister (Scott Morrison, from Marketing) is riding high in polling at the moment, but let’s not forget

Speaking of god, I’ve finally finished the Einstein biography. What a book, so well researched and written, all 551 pages. Einstein was Jewish and although he rejected all the claptrap of religion for most of his life, he did say one thing that resonates with me.

The churches always talk about god’s great plan and how the universe was designed and created by god. Well, Einstein rejected any idea of a god who answered personal prayers and concerns himself with every little happening on this Earth.

His view was that although he didn’t believe in an all powerful god, the universe and everything in it seems to fit to a plan, to be designed to be just so. Who or what or how it came to be just so, we will probably never know, but gradually we are uncovering the laws of the way it was designed. The great quest of physicists from Einstein, Bohr, Planck through to modern physicists such as Feynman, Hawking, Greene and Carroll is to find the one great set of equations that fits everything in the universe, the so-called GUT, the Grand Unified Theory.

Unfortunately, we’re still a long way from that and it’s mainly due to gravity. Newton’s Laws apply to everyday big things (including trips to Mars) and quantum theory applies as you get very small, the size of electrons and weird particles small. It’s fairly well understood how these mesh.

But gravity stands apart. No-one can see how to tie gravity to quantum mechanics. There are four fundamental forces in nature – the strong nuclear force, the weak nuclear force, the electromotive force and gravity. Gravity is the weak relation to the other three and no-one knows why.

The other interesting thing about Einstein is that he went to his grave (actually he was cremated and his ashes scattered, so there is no grave) in denial over quantum theory. The thing is, when you get so small, as small as electrons and protons and neutrons and quarks, you can not say with precision where a particle is at any given instant, because the act of observing a particle changes it. Therefore you cannot predict the path of an electron, for example, in the same way that Newton’s laws allow you to precisely predict the path of a thrown ball or a dropped weight.

All his life and in spite of his formidable intellectual powers, Einstein resisted this idea that statistics plays such a strong role in physical particles and life. He never relented, never accepted, fought all his life to find an alternative theory. He was so stubborn that he fell out with a few of the other famous physicists of his time. Strange.

We know now that quantum theory is true and Einstein was wrong to deny it. We still don’t know all there is to know about quantum mechanics but experiments have been done to verify parts of it, enough to convince almost all scientists. Yes, it’s very, very strange, queer almost, but there it is.

At last, a potential buyer turned up. Lucas, with his mate Luke – easy to remember. Lucas is on L plates so I took him for a drive but as I’m only on 3rd party insurance, I couldn’t let him drive. He was OK with that. But no commitment. He wants to leave it until Wednesday. I said, well, if someone offers me the money I can’t hold it for you. Besides, there’s another very keen guy coming on Wednesday.

That makes 27 enquiries. I wish I had half a dozen of these to sell.

PS: enquiry no. 28 came in at about 4.30pm and he just said, “Whats the lowest you would do”. No punctuation. I said, No chance mate, I have no need to bargain.