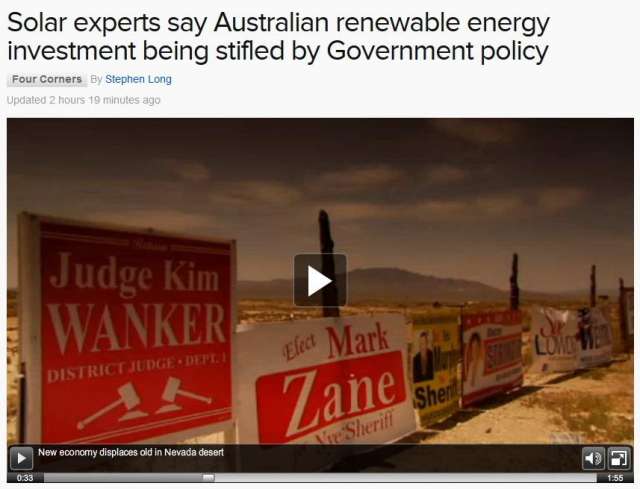 Look at the name on the sign! I wonder if he got elected.

Phew, I’m busy. Our 50th anniversary school reunion is now only 18 days away and I’ve still got 15 people who’ve said they’re coming but haven’t paid. The deadline was last Friday. We have to pre pay the hotel for 80 dinners regardless, so we’re trying to get people to pay what they’ve promised. This has been going on since July or earlier. Some people just have to be pushed and pushed. I’m not happy.

The magazine for the reunion is now up to 265 pages, with more being added daily. It’s a PDF file so the size can be anything and I can use as many images as I like. I’ve got 37 biographies so far, not a bad number. One guy has a great story to tell and writes really well in his emails, but I just can’t get his story out of him. He says he’s doing it, but nothing happens. Promises, promises. Oh well.

I’ve printed a preliminary copy of the magazine on paper and gee, it makes a thick book if you use good quality paper (semi-glossy for the images). It’s about 30mm thick. I’m getting a big buzz out of doing it.

And I have to say it – no-one, no-one – writes as well as I do. Even people who’ve been teachers for 50 years write prose full of spelling and grammatical errors, and just poor prose at that. One woman thinks she writes well and tries to pick errors in my emails, but she gets it wrong and her own writing is hurried and error ridden. This is clearly why younger people can’t write or spell properly. If the teachers can’t get it right and can’t take the trouble to try, how can they teach it?

I’ve written 40 pages on my life, another 22 pages on life at the Boys’ Hostel and another 14 pages on Life At School, with many, many pictures, more than 50. Oh, and three pages of “I Remember” one liners. But despite persistent pleas, I’ve had zero success in getting anyone else to write anything except very brief bio notes, usually a page or less, and many don’t seem to have any photos of their life. I can’t understand it. One was quite lively, but I’ve had to censor a couple of his references to teachers. They were very strong and well into defamation territory. I’d like to dump on a few people as well, but you can’t put it into print.

There’s no question that this has given me a passion for writing and when the reunion is over I’ll be getting back to my memoirs. My memory is fantastic. I remember so much, perhaps too much. I remember good bits, but I also can’t forget the bad bits. And there have been many bad bits.

The older I get the more I see how our lives and development are shaped by our early life experiences. The parents pass their problems on to the kids. Over and over, with each generation. This is not good.

Those poor kids in Iraq and Syria, frightened out of their wits by the war. They are scarred for life.

The rain on Sunday night! I woke at 1.20am to the sound on the roof and it just got heavier and heavier. It was a deluge. It was so heavy that thoughts of roof collapse crossed my mind. I haven’t heard rain that strong for many years. It did stop after 15 mins or so.

What a strange weather pattern. Saturday was hot – as I understand it, the max of 34.2C was the hottest September day on record. Then next day and through the night of Sunday and into Monday morning, it rained, and rained, and rained. We had 31.8mm, another record for September, I think. And even now, I’m cold. Strange days indeed.

I watched the TV series Broadchurch on the ABC last year and found it very good. They’ve re-run it in the past six weeks and I watched it again, even though the ABC pushed it later and later into the midnight time zone. I had to record the final episode on Sunday as it went to 1am.

I watched this final episode last night and I realised I hadn’t seen it before! Crumbs, this was the revelation of the killer. How could I have missed it first time around? Anyway, I’ve seen it now and at the very end, the credits said, “Broadchurch will return.” Good. This BBC drama is just superb. The Yanks just can’t match it. The first episode of the ABC production, The Code, was pretty good on Sunday too. I’ll keep watching that.

I’d fix it, but I can’t see any external TV antenna, so it must be in the roof. I can’t get up in there, no way. It’s a metal Colourbond roof – how can a TV antenna work when it’s shielded by steel sheeting? I’m wondering what kind of antenna installation I’ve got, if indeed there even is an antenna. There are outlets in the lounge and all three bedrooms, so I wonder if they’ve done the splitting properly (there is a proper way to do it – you can’t just twist wires together). I’ll have to get a professional in.

I’ll also have to get someone in to fix my garage roller door. Yesterday it wouldn’t close. The motor runs and the chain pulls, but it doesn’t grip the slider so it won’t pull the door. It’s not a problem to open and close it by hand, but you have to get out of the car, of course. Damn.

I’m doing a lot of printing for the reunion at the moment, ten A4 sheets of name cards and about 100 A4 certificates. That’s using a lot of ink, so I had to buy a new set of cartridges yesterday. A set in a box cost $106, plus another $19 for a grey. I could buy a whole new printer for a lot less than $125! This is atrocious. How could I toss a perfectly good multifunction printer just because the ink has run out? Shame, Canon, shame.

The cruise trip is also only 4 weeks away and there’s a lot of work organising that too. Luckily Jan just leaves it to me. He’s happy to accept my recommendations, so that makes it easy. I’m booked and paid for Beijing hotel, flight Beijing to Hanoi, Hanoi hotel so far. We’ve decided (I decided) to skip Bangkok. We’ll spend more time, a week, in Hanoi where the hotels are so cheap. I’ve booked a superior suite for A$76 a night. Nice.

Just the flight Hanoi to Bali and Bali hotel, then flight home to book. Hanoi to Bali has to be two hops, I’m afraid, via KL, with a few hours to wait there. At least you can stretch your legs.

I’m thinking that I’m looking forward to Bali most of all of this trip. I’m comfortable there. And I don’t actually have to return with Jan. He has to go back to work, but I could stay on if I want to. I don’t have to ask anyone’s permission or even tell anyone. I’m free to do whatever I want. If I could have Minnie back, I would in a heartbeat, but I don’t have to worry about my dog any more either. Freedom.

Of course, after five weeks travelling I’ll probably want to get home. Huh.

I’m trying to save weight in my packing plans, of course,as I want to take a travel tripod on this trip. That’s about 1.5Kg. CPAP blower is another 1.5Kg. All my medications will add about 1Kg I’d guess. Yeah, that many and that much with all the dispensers and cold pack for the insulin pens.

That’s a win. The maker of one of the insulin pens provides a free travel cooler. Free! It’s a zippered pouch like a pencil case but with cold packs in the sides. You freeze it, and it keeps your pens cool for up to five hours. Neat. Hah! I say free, but the particular pen, Byetta, costs $125 per month. They get their money that way.

My eye was caught by the Sony Experia Z2 tablet yesterday. It costs about $550, + $90 for a Bluetooth wireless keyboard. My Sony VIAO laptop, although it’s fantastic, weighs nearly 2Kg with charger and power cable. The Z2 tablet weighs 425g. You charge it via a USB socket, afaik, and I’m carrying a very small and light universal+USB charger anyway.

But the Z2 is an Android device, and I don’t have any experience of that. I want three things – to write (ie type my blog and diary) easily, to do email and internet, to download photos and video from my two cameras and to read books and listen to music. OK, five things. Six things.

I’d be very nervous about leaving my laptop behind. I can make slideshows and edit and make video on that, and even burn CDs, DVDs and BluRays. Yes, it has a BluRay recorder in it. You can’t do any of that on a tablet.

I write a lot on this blog, don’t I? I wonder many times if it’s worth it, if anyone’s reading. I know of one person for sure, but that’s all.

The thing is, I periodically download it as an xml (Extensible Markup Language) file for future book form. Or whatever. It goes right back to 2009 when I first started it and even in a small font there are over 1200 pages. Maybe one day some future historian might read it, like Samuel Pepys’s diaries became interesting to us now. Too bad, anyway. I like writing.

If I hear the word iconic once more, I may explode!