I’m a bit tempted to think, “Phew, only 12 days to go”, but I know it’s only the illness talking. Luckily I get enormous enjoyment out of doing this computer work so I don’t mind being a bit confined.

I did go out walking yesterday for nearly an hour, reaching the Hoan Kiem Lake. It’s not far. It’s quite picturesque – it’s a pity I couldn’t do it justice. 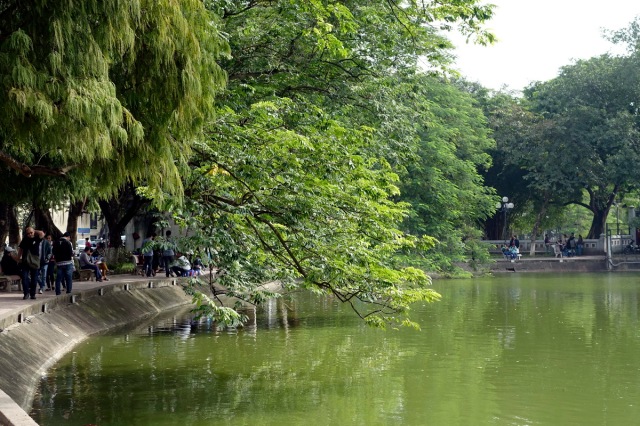 I stopped at a lakeside restaurant for lunch and ordered a chicken sandwich. I was surprised to receive a huge triple decker with a fried egg, salad and cheese in the middle, side salad and chips (to which I added salt). It was a full meal. Very nice, although their bread tends to be too white and too sweet for me. Beautiful lime juice, total 120,000 dong or $6.54. Can’t complain about that. (The exchange rate is A$1 = D18,365 approx. There are no coins and the smallest note is 1,000 dong or 5.5c.)

Tyred out before lunch

Then at 6pm it was time for dinner with my cousin who is stationed here. He lives in an obviously better area in a very fine colonial era house with a police guard at the front. I got out of the taxi and approached the gates, expecting to find an intercom. But the guard was having none of me. I couldn’t understand what he was saying but he wouldn’t announce me. I gathered he wanted ID but my passport is in the hotel safe. I pulled out my WA Driver’s Licence. He peered at it in the semi dark and it seemed to pass the test, so he pressed the buzzer and seconds later my cousin was there to let me in.

The first thing I noticed was a massive pair of QUAD electrostatic loudspeakers with matching QUAD amp and CD player. Wow. These are legendary. You can buy stuff like that here, but you wouldn’t find anything even close in Perth.

My cousin was suffering just like me from a chest infection so we walked only 200m to a nearby Italian restaurant where he knows the owner. Neither of us had a big appetite so it was antipasto with Italian cheese and a large mixed aperitif drink that kicked like a horse. It was a little bitter for my taste, but an experience.

Then spaghetti marinara cooked in a kind of pastry crust, full of small clams and prawns. Delicious.

Finally zabaglione – warm, specially made. I tried a bit – too sweet for me but nice. With a couple of hours of good conversation it was a good night. Thanks mate.