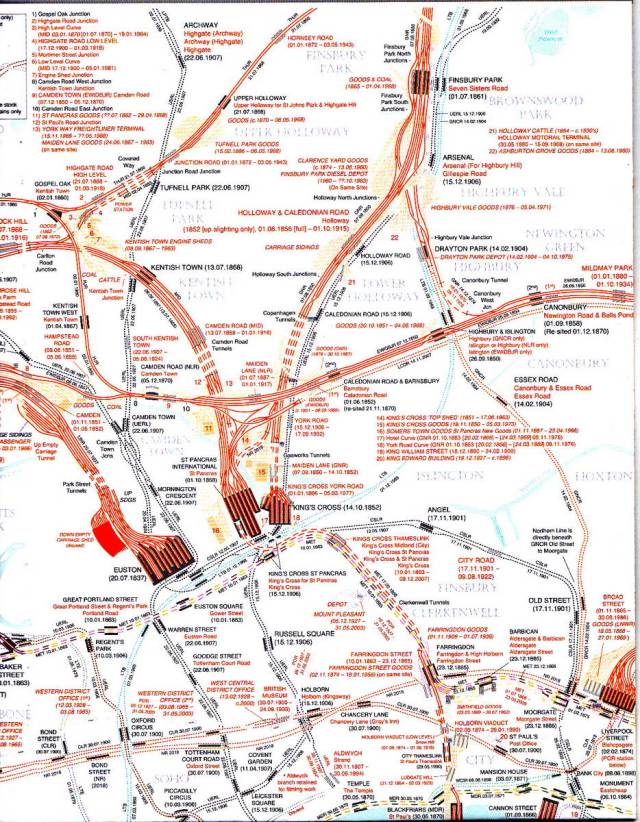 Look at that! It’s just a fraction (1/16th, part of a 4×4 folded A1 sized) print in a railways magazine I bought yesterday. It’s an enormously detailed map of London’s railways, including the Underground, and even showing obsolete decommissioned lines. Each of those single orange lines above is actually a pair of rails, so if the drawing were even bigger, the detail would be even more fantastic. Whoever did this drawing, it’s a masterpiece. I wish I could show more but the page is enormous. I love it.

Now I’ll be able to base my layout plan on real tracks, not just my imagination, or some magazine layout.

I’ve been meaning to write about this for a long time and I’ve seen so many examples of language lunacy lately that I think I need to speak up. There’s a list of things that are getting my goat (odd expression, isn’t it?). Here goes:

1. I listen to a lot of talkback radio and I’m driven mad (yeah, I’m round the twist) by people who can’t seem to help themselves saying, “Hi John (or George, or Fred…), how are you?” Everyone says “How are you?” For goodness sake, the announcer has said a hundred times already that he’s fine, but the next caller will still say, “How are you?” and the next, and the next.

Can’t people control what they say? Is it impossible for them to just say, “Hello Fred, in my opinion …” and stop wasting our time by requiring the announcer to tell us for the hundredth time that he’s well. Many times the callers won’t continue unless the announcer responds. They wait in silence until prompted to speak. Why must they wait? The announcer has already greeted them, they know they’re on-air, but they need to be prompted to continue. Crazy.

2. Need I say it? Iconic. It is the world’s fastest spreading cliche word. It’s a world wide epidemic. For goodness sake, an icon is a physical object. You can’t call an idea or concept iconic – they have no physical reality. You can’t say it’s “an iconic concept”. I even saw some video editing software called iconic.

It’s got so bad that i’ve started counting the number of instances of seeing ‘iconic” per day. I’ve even just read an article in an up market newspaper where iconic is used twice in the same paragraph. STOP!

This has also become a worldwide pestilence, but nowhere as bad as in Australia and nowhere as bad here as in sport. Listen to a sportsman speaking next time on the radio or TV and count the number of times he says “y’know”. It’s reached the stage where it’s no longer two separate words, or words run together, it’s now “yknow” with the y almost vestigial.

I listen a lot to the BBC in the early hours and even they are using these words, y’know and iconic now. It’s hopeless.

4. Phenomena. One phenomenon, two or more phenomena. Yet phenomena, the plural word, is used as the singular even by people I’d thought were good speakers. And politicians. You can’t say “This is a new phenomena.” I can’t and won’t, anyway. I know how to speak.

I watched the first episode of The Bletchley Girls on ABC1 last night. Actually, this is the third time through, but it’s a bit better than the average TV series these days. I’ve also just finished reading the novel Enigma, by Robert Harris. It’s based on the same place, Bletchley Park, during WW2.

It reminded me that I watched the movie The Imitation Game a couple of weeks ago too. It’s based on the book of the same name (by a Cambridge academic whose name I’ve forgotten), the biography of Alan Turing.

If you want to see the movie, I strongly recommend that you see it first before reading the book. The movie is a Hollywood hyped up travesty of the book. It’s a joke. The book is hard going at times (well, most of the time, actually), but very, very rewarding, very well written and full of detail. I was never tempted to abandon it. The movie is a single TV episode by comparison.

Then last week I watched The Theory of Everything, the movie of Stephen Hawking’s life. It’s based on the book Travelling to Infinity by his former wife Jane Hawking.

Once again, although I agree the acting was terrific, the movie was a cartoon compared to the book. It’s not inaccurate but it glosses over 75% of the book’s contents. Not even close. If you want to read the book, see the movie first and gain so much more when you read the book.