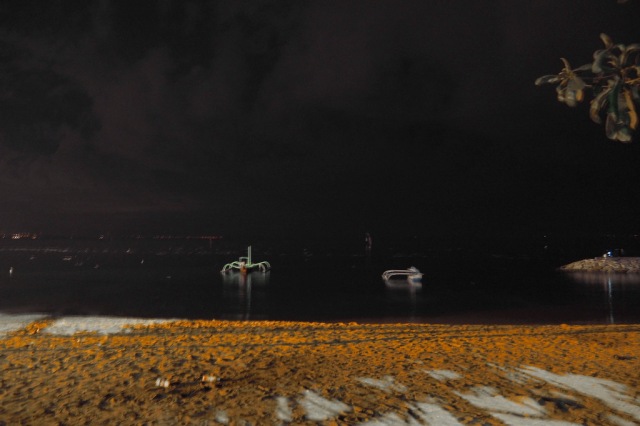 I’m writing this at 5.30am after another sleepless night. I just couldn’t get to sleep! Maybe I dozed, but it didn’t feel like it. I’ll crash after breakfast, but that’ll mess up the pattern. Dang.

I actually went down to the beach-front here in Sanur at 11.30pm and sat there for a good hour trying to photograph anything that happened, but it was a waste of time. The air is so cloudy and misty that I couldn’t see any stars, let alone any meteorite trails. The shot above shows what I was seeing. 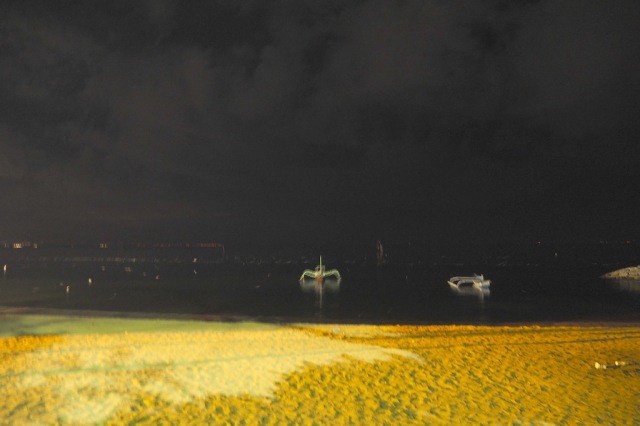 These are terrible photos. I shouldn’t show them, but you can see the clouds. The title refers to my track record of years of missing astronomical events for one reason or another. This is just another dead duck night. All is not lost, there are two more nights of it to come, apparently. I’ll try again tonight (Tuesday night).

The camera was on a tripod but the shots are still shaky. Why? Because the adapter plate won’t lock firmly into the base, for some reason. It was too dark to see what was going on, so I’ll try to fix it today. Also, I had all sorts of trouble getting my Olympus camera to focus. I only got one or two acceptable ones. The Panasonic FZ1000 seemed much better from what I could see in the darkness, but I still can’t get the pics off the SDXC card yet, not until I can buy a proper adapter. Maybe I’ll go into Denpasar today.

I went across the road for drinks and dinner last night and the couple I saw on Sunday night were there again. It’s a real Aussie hangout. Gawd, we’re an ugly lot! We’re all overweight, me included, but some are gross. Terribly dressed, ugly people. But we spend the big dollars, don’t we?, so to the Balinese, we’re all walking ATMs.

The lady told me about a homestay place just nearby called the Duck Inn, which she highly recommends at $33 per night. It’s run by an Australian woman and her Balinese husband. Maybe I’ll go and have a look for future reference.

I’ll also go and see if I can find the British/Australian/Perth guy I dealt with in early 2011 over a property here. Really nice guy. I know where his villa is, but I suspect age and infirmity might have caught up with him. Crikey, he was 83 when I knew him. I heard his wife had breast cancer.

My run of faulty appliances continues! Last Friday I was in the chemist and noticed a thing called Pain-eeze or something like that. It’s a TENS (Transcutaneous Electrical Neural Stimulation) pad, about a hand span in size, with sticky pads that you place on any painful area and it stimulates the nerves and muscles to stop the pain.

My right shoulder and forearm have become painful recently, I assume due to prolonged mouse use, so I made a spur of the moment decision to buy one, at $55.

The first time I used it, it seemed quite good. It runs off a CR2032 button battery, and you press +/- signed buttons to set the stim level. It all worked fine on Friday and seemed to help.

I brought it with me and I tried to use it again yesterday, but it’s dead! Damn. No stimulation at all. What’s happened? Maybe the battery has gone dead? If I were at home I could measure it, but here I’ll just have to buy another battery to test that theory. It won’t cost much. But why would the battery run down when it’s not in use? It switches off automatically after 20 mins of use and it’s kept in a hard plastic case, so the switch shouldn’t have been activated accidentally. Maybe it was. See the next exciting installment of this saga.

8.30pm: back from dinner across the road. Prawn cocktail $3.50 and chicken curry $4.55. Not bad but nothing to write home about (sez he, writing home about it 🙂 ) One more night here: I must venture further afield. There’s another restaurant about 50m further up the road called Nook. It looks good. Must try it tomorrow night.

I slept during the day to make up for last night, but that’ll mess me around tonight, I fear. I brought a box of chamomile tea with me. That seems to help. I also had another good swim in the pool today, again as the only one. Then a fairly sweaty walk down to Jalan Tamblingan to buy anti-cramp medication (at $7 for 10 tablets, it’s worth a try. Sez he, assuming it won’t poison me or interact with my other meds :-} ).

I found a DVD shop and bought The Martian (for $1), plus a 2-disc set of The News Room; a 3-disc set of a TV series called Dark Matter; and the new movie called San Andreas, about an LA earthquake. Seven discs for $5. Can’t argue with that. I’ve already found an oddity with The Martian: Chinese characters keep appearing at the bottom of the screen and the pictures, although quite good, are a bit soft. Aha, it’s a copy of a pirated copy for the Chinese market. Oh well, I’ll still buy the Blu-Ray version at home when it comes out so they’ll get my money.

I said I’d go to the beach again tonight at midnight to see if I can see any meteors, but I don’t think so — I don’t think it would be any clearer than last night. No chance, in other words.

I’m just reading an article about the search for Extra Terrestrial radio signals that’s ramping up in Australia using the Parkes radio telescope. There’s a lot of scepticism, even among scientists, about this. Many think it’s a waste of time and money. Despite decades of searches so far, nothing has ever been found.

That doesn’t mean we shouldn’t try.