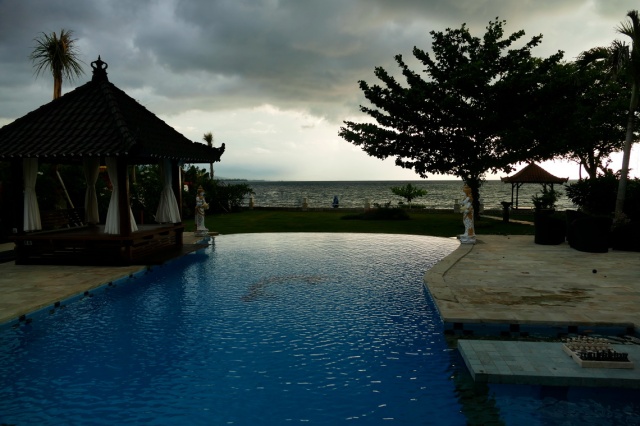 Ah, Sunday, a day off. But it was a day with a bit of work thrown in. V had to get a load of her stuff (ahem!) from the villa she’s been living in at a place about 40km from here, so off we went in her Daihatsu Xenia SUV. It was a nice drive in grey, cool weather, after some rain the night before. Traffic on the narrow single lane highway wasn’t too heavy. You drive through some beautiful forested areas on that road. At one point, the rice paddies were filled with people harvesting the rice. It might have made a nice photo, but we were past it too quickly and it’s very tricky to park off the road.

Surprisingly, when we drove down the narrow road to the villa through the rice paddies, there were big areas that had been flattened. At first I thought cattle might have done it, but as we drove on, it became obvious that mini tornadoes had been through the night before. It was as if giant hands had reached down and pressed the nearly ripe rice down, just like wheat fields. Poor farmers.

The villa V’s been using at Kalisada, up to now.

So we got to the villa and poor V had to work hard to get all her stuff into big plastic boxes. Then we loaded them into the car, with some difficulty.  A couple were pretty heavy, but we got there, even though my front passenger seat had to be pushed forward. It was quite a load.

On the way back, we drove back up into the mountain range to try to call in on V’s friend at Kayuh Putih, but she wasn’t home. The views down onto the coast are spectacular from there. That’s on a fine day, anyway, but it’s always hazy. It’s also beautifully cool.

V wants a piece of tree branch cut to fit into the monkey’s cage. Did I mention the monkey? His name’s Charlie and he spends all his time cooped up in a cage. V and I are both sad that he has nothing to do. V gave him a toy monkey yesterday, but he wouldn’t go near it to start with. I don’t know if he’s adopted it yet, but we want to put a branch in there for him to climb on. Unfortunately, if he’s let out on a leash, the dog tries to attack him.

We got back about 2pm and I went straight into the pool. It’s so good to be able to do that. But after a while I got a bit cold and a bit of leg cramp set in. I’ve been taking magnesium capsules for my night cramps and it seems to be working. No problem at night. But when I get cold in the pool …  Cold? The water’s not cold in the tropics, but cool …

On Tuesday we go back to Sanur for my booking at the Astana Pengembak hotel. We’re looking forward to being in Sanur, as the beaches are swimmable! The beaches up here on the north side are not very pleasant, just dark sand or mud, with dirty looking water.

I’m looking forward to trying a boat or ferry trip to Nusa Lembongan. It’s not the destination that does it for me, I just like being out on the ocean, and so does V. Boy, does she like the ocean.

But tomorrow, Monday, is a day off as we don’t have the car, temporarily. This villa is about 200m off the main road, and the days are very hot – 31C and 95% humidity, so to go walking is a bit daunting. No problem, there’s plenty to keep me occupied.

I can’t resist having a rant:

The question that comes to mind is this: If, as company leaders tell us year in and year out, those at the top need to be paid enormous fortunes [from 100 times Average Weekly Ordinary Time Earnings] on top of their base salaries to get them to do a good job, why is it different at the bottom?

How will cutting the salaries of the staff, that company leaders also repeatedly tell us are their most important asset, incentivise them to do better?

How will that not trash morale and with it performance, and in the end, hurt the bottom line?

And one final point. Before company leaders complain that I am comparing apples with oranges: yes, penalty rates are paid just for turning up. But so too are CEO bonuses.

History tells us very clearly that bonuses get paid regardless of company performance.

I’ve been saying this for many years – why is it that managers and sales people get bonuses just for doing their job, but they are trying their hardest to remove penalty rates for working weekends and public holidays for ordinary wage earners? The wage earners get no bonuses. It’s utter hypocrisy! End rant.