Mercedes CLK 2003 model, around $25,000 second hand. I’ve revised my ideas about what to choose, but I think I’ll wait until next year.

Sometimes I amaze myself. I mentioned in the last post that I reckoned the Navman Mivue GPS/Traffic camera device I bought seemed to be faulty – the camera wouldn’t work because it constantly told me the SD card wasn’t formatted. I tried different cards, inserting and reinserting, nothing helped. It didn’t seem to recognise that there was a card inserted.

So, yesterday I took it back to JB HiFi where I bought it and told them of my troubles. The guy looked at it and didn’t even know how to turn it on. I had to show him. Good start. But then he earned his wage by popping the microSD card out. But he popped the card out from the top edge of the unit! Holy smoke, I hadn’t noticed that there was a slot on the top edge as well as on the side where all the connections are. I’d been using the side slot, naturally, and because I’d seen that slot, I didn’t see any further. There’s no instruction book, just a Quick Start leaflet which doesn’t say much.

So, once he formatted the card in the top slot, while there was no card in the side slot, it all sprang to life. Damn. By amazing myself, I mean my stupidity sometimes. Yes folks, I can be dumb. I admit it. A man sees what he wants to see and disregards the rest.

A few years ago I bought a $35 laser printer – yes, $35! A new toner cartridge was listed as $65, so I figured it was going to be a throwaway item, but I found a Hong Kong place that sells toner for it at $9 per cartridge so I ordered three. I figure I’ve got at least five years’ worth there. Good deal after all.

Anyway, when I got the printer home, it wouldn’t turn on. There’s a big button on the top with a LED so I figured that was the power button. No go. Nothing. I reseated and swapped the power cable, tried everything. No luck. No go.

So I took it back to Office Works. They took it out the back and came back with it and agreed with me, they would swap it for a new one. But then I noticed – the power switch on the left side!! Surely not? Did I just miss this power switch? I think I did. I was so embarrassed (privately) that I just shut up and took the replacement home and it all worked. But how come Office Works agreed that the original was faulty? Did they miss this switch as well? Were they just following “the customer is always right” rule? I’ll never know. Privately, my face was red. I just didn’t see that switch. Dumb bum.

As I said, it’s very economical to use this monochrome laser printer instead of using the super expensive Canon inkjet inks if I’m only printing text. The first toner cartridge lasted about 18 months and I’ve got a new Hong Kong one in and two spares, so there’s about 3x 18 = 54 months worth of life before I need another $9 cartridge. And it’s so quick. At $35 for a laser printer (!) it was a good buy. Fuji Xerox, by the way.

I keep harping on the need for unions, but Four Corners on Monday night proved the case again – there are absolute bastard employers who will exploit workers if they can get away with it, and they do get away with it. The workers are HK or Taiwanese Chinese, many with little English, here on 417 visas, permitted to work but with no bargaining power and no knowledge of the rules. The labour hire firms are treating them as virtual slaves, because they can. Setting 18 – 22 hour work days, withholding wages, screwing these workers down with threats and intimidation. Who looks out for the workers unless it’s a union?

We’re always told that we don’t want unions getting between employees and the managers. Oh yeah? How many employees have the self confidence to stand up for their rights, or even know what their rights are? How many know how to negotiate?

There has to be a union to look after employees, bargaining and negotiating for them. I’ve never advocated compulsory union membership but unions have a very big place in workforces. Look at Japan, South Korea, Germany – they all have unions and they are the best places in the world to work and with the highest productivity. If unions are so bad, as Abetz and Abbott and Howard always say, then how come these countries do so well? Better management, that’s why. It’s not unions that hold this country back, it’s bloody atrocious managers. I speak from bitter experience.

I continue to love If You Are The One on SBS, the Chinese dating show. There’s something about it that grips me. Gorgeous girls, for one thing.

But they are too picky! So many guys are totally rejected for no good reason. A lot of the guys look like really good guys, but the girls are much too ready to say, “Too skinny”, “too tall”, “too short”, “his clothes look funny”, “he’s going bald”, and silly things like that. Some of the girls are no great shakes either. Some of them are so aggressive and tough that I’d reject them too.

Unfortunately SBS plays the episodes totally out of order. One night they’ll play a very recent episode (as shown by the new looking girls and set changes), then the next they’ll show an episode at least two years old. very frustrating.

In the recent episodes, I want number 16. She’s very, very forthright and can be quite tough and cutting, but the sparkling intelligence just shines through. Yum. Beautiful smile. Gorgeous looking. But you’d need to be tough to handle her.

I was very surprised last night. There was a good looking guy, 27, with a PhD in physics, doing research on a particle accelerator. But he was a very pleasant guy, good looking, big smile, good sense of humour, but he was rejected completely. Were all the girls put off by worry that he was too brainy? Well, that can’t be, because one of the most attractive girls, whose caption shows her to be a restaurant manager, revealed that she has a degree in physics! My jaw dropped. She’s been on for weeks, but this was the first time she’d revealed how smart she is. But the guy wasn’t good enough for her, even so. There’s no understanding women.

I put my faulty treadmill (that I was given, free, by a friend a few months ago) out on the verge late yesterday, hoping someone will take it away. I’ll check in a minute to see if it’s gone. UPDATE 0930: yes, it’s gone. Good. I should have put it out months ago.

I tried to fix it (it’s an electronic control unit fault) but I can’t. It uses a special large scale integrated circuit that you can only buy from the treadmill makers, not from an electronic parts place. My friend said he’d had it fixed once already at a cost of $215, and it went faulty again. Not worth fixing. Out, out, out.

I think I’ll have to buy a treadmill – either new or second hand. I really, really need to be using one. It’s easier than walking outside because you can watch TV or listen to music while you do it. That makes the time go fast.

That’ll mean I’ll need to clear the space that I placed the small tables for my model railway.

That’s on hold. I’m too busy doing books. I’ve finished the Croft History volume 2 as I said, and I’m working now on a book of my photos of — Me! Tentative title – Bull’s I. I’m putting much more text in this one, explaining the circumstances of each photo, and background on the time and place. very enjoyable. I’ve done about eight pages out of 40 so far. I’ve got pre-paid vouchers with 40 pages allowed, but I suspect I might need to go above that 40. 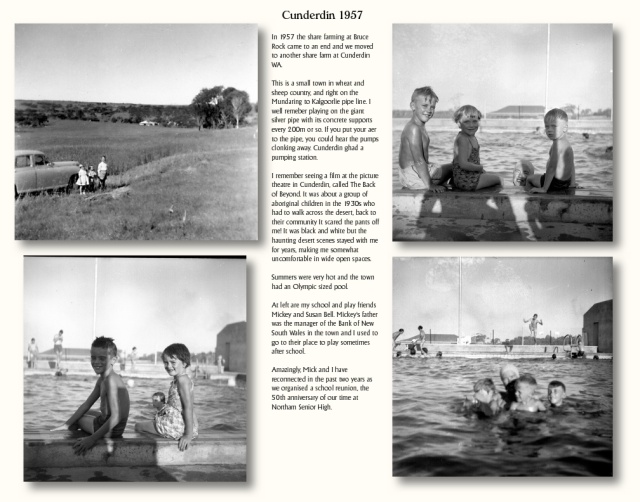 I’m in pain. My left shoulder is hurting like hell, so badly that I’m groaning. It’s the C6 vertebra problem that I had in 2013. It had been fine for over 12 months but the pain is back, quite badly. Enough to be taking Tramadol and Panadol Osteo three times a day. Ther’s no fix for it except risky surgery, so I just have to wait it out. It will come good. It’s making it a bit hard to sleep, though, because I have to find a position in bed where it lessens the pain. That’s mostly lying on my back, which is not ideal.