I had a puncture yesterday. Actually, the left rear tyre of my car did. I hadn’t used the car since last Monday and I’d walked past it and hadn’t noticed anything wrong, so I think it was a slow leak. Anyway, I went to go out yesterday morning (just to buy the papers – at Quinns*) and found I couldn’t.

That’s the first puncture I’ve had in over 30 years. I often think about it. The last one was down in Pemberton in the early 1980s on the Honda Accord. In those days I changed the tyre myself, but I started to do it yesterday and realised the nuts were too tight, the jack was too hard and the spare was too soft.

I called the RAC and he made quick and easy work of it. Crumbs, trolley jack, impact nut driver and the wheel was off in about two minutes flat, if you’ll pardon the pun. Then spare on, and an air hose like you see at service stations and I was a goer. I have a small foot pump but it was making no difference at all. Waste of effort.

The cause of the flat was immediately obvious – a screw through the tyre. So that’s what that clicking sound last Monday was.

What a bugger, because I’ll have to buy a new tyre and since I want to sell the car very soon, I didn’t want to spend any money on it. Can’t be helped. The RAC guy quoted me $91 for a new one, so it’s not too bad.

Crumbs, the accent on the RAC guy! He was a Scot, with the thickest Scots accent I’ve ever heard. I could hardly understand him unless he was facing me and I could read his lips, not that they moved much. Nice guy, from the Loch Lomond area of Scotland. He told me the town but I couldn’t understand him. Nice guy, been here 10 months.

Wow, I’m wrestling with the car decision. I spoke on the phone to the owner of the CL600 on Friday and it seems genuine. He’s a big businessman and has four other cars. Needs the garage space, he says.

Then in the same yard, there’s a CLK 350 for the much cheaper price of $21,777. That’s a big saving. It’s done 107,000Km though, which Barry sucks his teeth at. Reaching the age where some work might need doing, expensive work.

Hmmm, tough decisions, but very enjoyable to think about.

I’m back on my hobby horse of tilted photos again. A US photography blogger has just moved to the Finger Lakes area of New York state, and he suggested we Google images of the area.

Well I did, and I’m amazed at the sloppy images I found. Some examples. In each case, original on left, my correction on right: 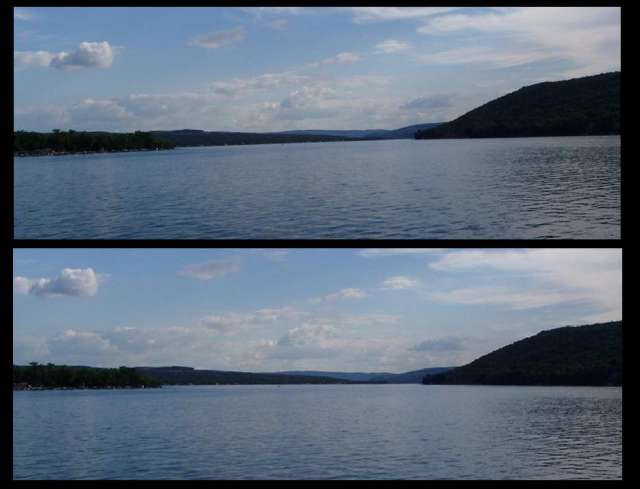 I don’t understand how these can be released by their owners with these tilted water horizons. I wouldn’t allow it.

Good to see that this incompetent, cruel government is digging itself into a deeper and deeper hole. The royal commission is going off the rails, having lost credibility. The cabinet is leaking like a sieve. The government’s climate change abatement figures have been shown to be a pack of lies (by Bernie Fraser, no less, the former head of the Reserve Bank, a pretty credible guy). New atrocities are surfacing weekly at our concentration camps on Nauru and Manus. The list is endless. This must be a one term government. They are just too awful.