Sunday morning in the restaurant trying to feel better after one too many drinks last night. It is so pleasant, sitting here open to the street, watching the people come and go, carrying things, food, flower arrays and baskets to and from the temple 50m away. The traffic is blocked off, so except for the odd motorbike or scooter, it’s quite quiet.

Speaking of scooters, how about this? 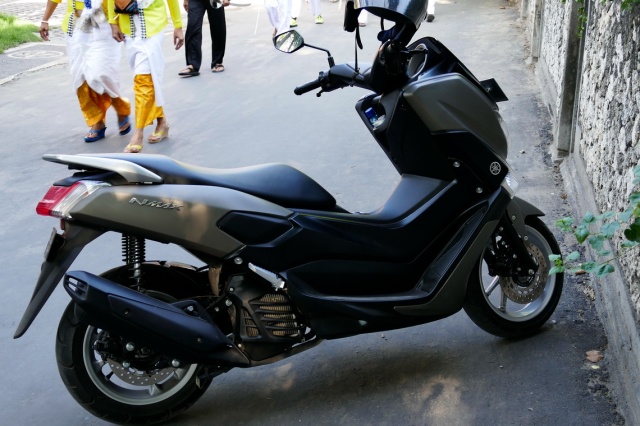 If I were in the market, I’d look closely at one of those. Yumm.

We went to see a couple of long term rental properties in Sanur yesterday. We’re a long way from doing anything yet, it wouldn’t be until much later in the year, but we were recommended by a friend so we went along.

Finding the friend’s house in the maze of narrow streets was task number one. The taxi driver threaded his way back and forth, looking for Gang III, and we eventually found it after going into the wrong house and asking for directions.

An agent was there and we were asked to be pillion passengers on their scooters, but I just can’t get my leg over, if you’ll pardon my expression, so we got another taxi. Again, left, right, back, forward, reverse, a maze of streets, at one stage having to fold the car’s mirrors inwards to squeeze through.

On to the next place which was better, more open, but it immediately struck us how much noise there was from the street just over the wall. I think I might have been able to tolerate it, tune it out after a while, but it didn’t have any positives, so bye bye.

After that we returned to the hotel and looked webwise for properties for long term rentals. There’s plenty available, so we bookmarked a few. But this is in the future.