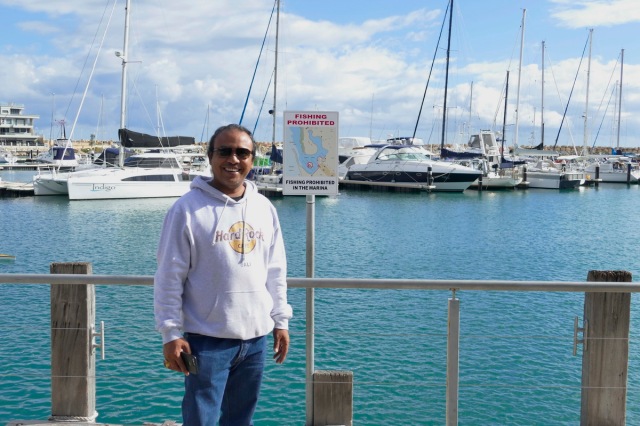 It’s all happening! I’ve been pretty busy the past week. Above is my Balinese friend Yudi. After an initial planned visit to Perth, he had a visa mixup and it looked as if he couldn’t come. Therefore I booked my trip. But suddenly last week the visa was fixed and he got a flight last Thursday (1 June) for his first visit to Perth. He’s been to Australia before, but only on the Gold Coast.

So I picked him up from the airport and he stayed a couple of nights with me. Very impressed with my house, and liked the area a lot, but I don’t think he understood how far out I am and how great the distances are in Perth. Anyway, I showed him a little of the local scene.

Then my flight was on Saturday (3 June), so I put him on the train to Victoria Park where he has friends. It’s a pity our schedules clashed like that, but it can’t be helped. The weather was surprisingly mild for his visit.

Then it was my turn to come to Bali and here I am outside Yudi’s restaurant and business office, Tuesday 6 June. 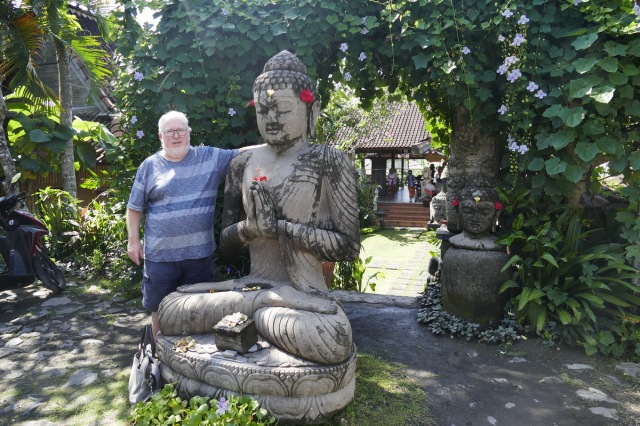 It’s beautiful here, just right temps of 27C and low humidity. My partner has come back from her island cruise and we’re in a beach hotel in Sanur. We hope to catch the high tide tomorrow morning, as it’s very low and shallow around noon. 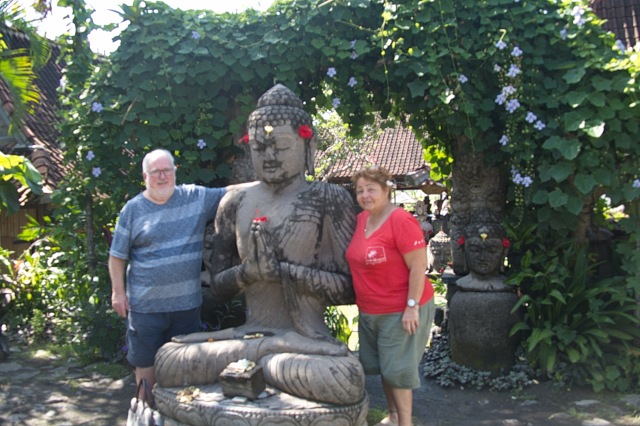 I said I’d never let anything come between us.

This was Xmas 2016 in Sanur. I like this photo. It was taken with Yudi’s iPhone by a waitress.

It’s fairly quiet at the moment. Ramadan might have something to do with it, but from what I read, although tourism is up slightly, the average stay is shorter, cancelling it out. It’s hard on the taxi drivers.

I bought a new suitcase here because the locks are broken on my usual one. I tried to fix them at home but it was a waste of time. Le Suitcase et mort. I came here using an older soft sided suitcase, but this new one is hard cased, with a water resistant seal and no zips, just two latches on one end and a main combination locked latch on the main edge. It’s strong enough to sit on. It’s white, very trendy. So what if it gets scuff marks, it’s highly visible. I heard an airport woman say in a TV program, “Please, no black bags. They all look alike.” And suitcases are stacked six or more high in the cargo holds, so they need to be strong.

I didn’t want zips, by the way, because not only have I seen a zip opened with a Biro, I’ve done it myself. It took about five seconds. No way you’d get into this new one.

The guy set the combination for me in the shop, showing me how, and emphasising that the numbers are right to left. so last night when I used the combination lock for the first time, I entered the numbers as he said. I couldn’t get it open! I thought I might have the numbers wrong  and tried different ways, but no go.

So next, I entered them L-R. Sproing! That was it. What was that R-L all about? Maybe there are instructions in the tag that came with it. Anyway, I like it. I’ll leave my soft sided suitcase here for next time.

I considered buying this camera that I’ve mentioned before:

But the Bali price is $510 (wouldn’t haggle) compared with the full retail price of $449, GST free about $400 in Perth. Perth is very, very competitive in photographics, computers and electronics.

I’m up on the north coast now, in the Lovina area. It’s warm up here, seeming to be more than Sanur. Not much of a sea breeze. Humid too.

The ABC show Checkout has a segment about how packaged food looks compared with its actual appearance. 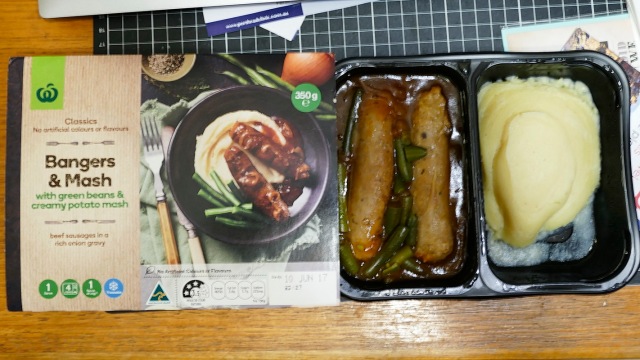 I had this last week. The package tempted me and I fell for it, but as you can see, it isn’t the same. The sausages were full of bread filling and the gravy was gooey. The mashed potato was dry! It broke away in chunks. So I won’t buy it again. Lesson learnt.