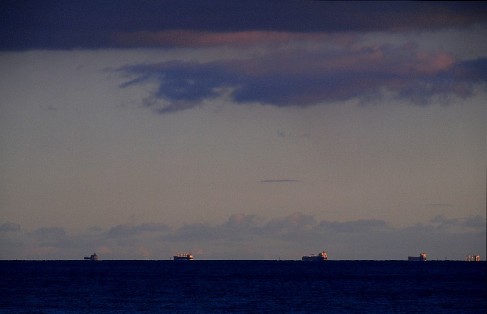 Here I am in Busselton now, in a caravan park near the beach front. I’m in a cabin, paying $70 a night, and although it’s adequate, it’s pretty low quality. Everything is old, scratched, stained. Clean, but hardly 4-star, which is what they claim. Cheap plastic chairs, very uncomfortable. I’ll have to buy a cushion, I think.

They were going to charge me $14 a night for linen too. Kerrrumbs, only a few nights and you’ve paid for a new sheet set. I needed to buy new sheets anyway, so I bought a new set of very nice quality in QB size (to suit my bed) for $69 at Target. I also found a very nice QB quilt cover marked down to half price at $49.75, so I bought that too. It included two pillow cases, so with the sheet set, that’s four. All 800 thread count sateen. I bought two pillows too.

Minnie seems to have settled down OK. She’s lying on her cushions on a concrete car port and I’ve had to keep her on the long wire leash. She’s been quiet so far. There seems to be enough  movement and people around to keep her stimulated. I’m worried that she’ll bark, but she hasn’t in the past 6 hours or so.

I got another shock today. I chose this park because they take dogs, right? I talked about her to the woman last week when I made the booking, so they took my booking for a cabin knowing I have a dog.

But today when I arrived and went to register and pay, it was a different woman and she said, “Oh. No. No dogs are allowed in cabins.” What??!! I explained that I’d pre-arranged this and she relented, but I was very nervous for a while, because I could see the notice up on the wall, “No dogs in cabins”. I explained that there’s no way  Minnie will be in  the cabin – she can’t get up the steps. I’m told the gardener is a bit of a policeman, so I’m a bit worried, but they took my money, so they’ve made a contract. The people across the way are dog lovers anyway, so it should be OK.  But there goes another assumption again – I assumed it would be OK. I hope so.

For the first time on the “trip”, I’ve got my Panasonic HD Video Recorder out and set up feeding my 19″ LCD screen. But I can’t find the remote! I know I brought it, I’ve seen it – it must be in the car somewhere, but at this moment, I can’t find it. The button controls are useless on the machine itself – it needs the remote. I thought, OK, I’ll buy a cheap multi-brand remote at Jaycar in the main street. Nope, they don’t sell any. At least there’s a Teac 19″ LCD TV in the cabin and it’s digital reception, so I have a good choice of programs. Good.

PS: I only listed driving in Malaysia once yesterday, but I did it twice. The first time was in 1986 with  a friend who was a biologist and excellent photographer, so we went right into the jungle in search of insects and plants. That was such a great trip that I did it again in about 1991, on my own that time, but driving myself in a hire car.

Malaysia is a much underrated country. I love it. It’s mostly English speaking from colonial days, very British in some areas (Cameron Highlands, Penang) and full of interesting places to go. KL is like Singapore used to be in the 70s, but maybe a bit better. Great shopping, great food, and with the A$ equal to about M$3.30, you can afford to stay in great hotels too. Just like Singapore used to be. I could easily live in Penang. Much like Bali …