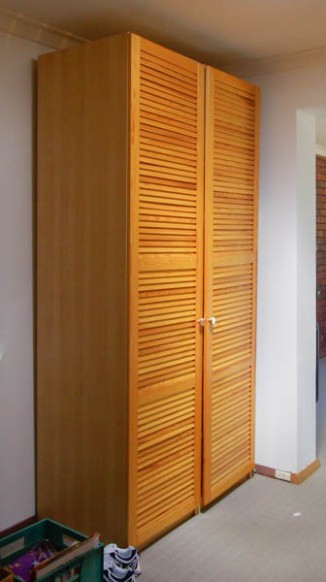 They’re gone. I’ve sold my IKEA wardrobes. A bloke and his son just came and loaded ’em up and took ’em away.

These wardrobes had a long history. I originally bought five PAX wardrobes in flat pack form in about 2001 when IKEA was changing their range. They are wider than the current models and in birch veneer with Baltic pine louvre doors. Beautifully made. I paid $200 each for them, plus another $100 worth of hinges.

But with one thing and another, they stayed in flat form leaning against my bedroom wall until 2008, when I was heading to Europe and having a house sitter in. I had to finally get around to assembling and installing them. They looked great! All five formed a wardrobe wall.

But as these things do, they became the repository for everything – all my junk, as well as clothes. They were packed with stuff.

In early 2011 when I thought I was going to Bali, they had to be emptied and got rid of. It took a huge effort, but we  (Barry and I) did it, and Barry bought them from me and took them away in full assembled form, with his mate Brian to lend muscle.

Then Bali fell through and I needed them again. I bought them back off Baz for the same amount and he and Brian brought them back. Each wardrobe took one trip from Sorrento to Trigg on its own in his Land Cruiser.

They went back into the same place, the same room, but on bare concrete this time because the carpet had been stripped out.

Then in July 2012 I had to get the house recarpeted for sale, so they had to come out again! That meant clearing them again! This was getting boring. This time I disassembled three of them and stored them in the workshop in flat form again. At least, two guys I was paying to help me did. Trouble was, they stood them straight on the concrete floor, which was prone to flooding in heavy rain. That meant after they’d gone, I had to move them to one side in the workshop, put some bricks and timbers in and move them back again off the floor. Did I say boring?

After the carpet was in, the remaining two came back inside and I lived with them for the next seven months until I had to clear the house again after sale in February. So they had to be disassembled again and put into the storage lockup. Then they came out here in the big move in April. I should have sold them while I was at Trigg, but it was just too much to think about, too much to cope with at the time.

They’ve been in the garage since. Luckily there’s plenty of space there, but I can’t use them here, so a couple of days ago I put them up for sale on Gum Tree. Wow. I got the first call within two hours. Fast work.

But he only wanted two of the five. I said, no, it’ll be harder to sell in ones and twos – I need to sell the lot. Anyway, it’s an absolute bargain – $250 for the lot. He said he’d talk to his wife, but didn’t call back.

Another guy rang next day and asked if I had them in white! What? I’m not a dealer – they are as you see in the photo. Oh.

Then yesterday I got a woman again wanting to buy only one. Same deal – no, prefer to sell as job lot. She’d get back to me.

Then only five minutes later, another woman rang from Wanneroo, very enthusiastic, just what she wants, can she come tomorrow? Wants them all. Terrific.

Then the first lady emails me – she wants to come and see them. I say sorry, they’re sold now. She emails back, “I could pay you more if you like.” She’s sorry she missed them and wants to start a bidding process. I say, “Sorry, I’ve committed to a prior sale and it wouldn’t be fair. If the sale falls through, I’ll get back to you.”

But it all went smoothly and the husband collected them just now. Didn’t quibble, didn’t want a closer look, just handed me the cash and started loading up. They fitted his trailer perfectly.

So, all gone. I liked those wardrobes. You can’t buy that style any more. It’s all either white or metallic or mirrors or bold paint colours. No louvre doors. Au revoir.

That was my first experience of Gum Tree and it worked fine. I’ll try to use it again. This morning I’ve just discovered another auction web site for photographic gear, and it’s a West Australian development. It was mentioned on PetaPixel, a US web site.

It’s like eBay, but only for camera gear. You can pay by PayPal, so it’s safe enough. There’s not much gear on it yet, but I really need to get rid of a lot of my “treasures”, so I’ll put them up and see what happens. Good idea.

I finally managed to shift enough boxes yesterday to retrieve my cheap laser printer, so at last I’ll be able to print again. I can see the Canon multi-function printer, and my big Epson photo printer, but they’re too far down to reach yet.

I think Minnie is confused by all the quartz chip ground cover, and she doesn’t know where to poo. There’s no exposed soil for her, so she’s pooing anywhere. Got to clear some ground.

She came out into the back lane while the guy was here and started sniffing the fences. The little terrier dogs behind the fence went mad! I’m surrounded on all three sides by these little yapping silky terriers. They are very annoying with their barking. It’s yapping, going on and on at times. Minnie barks with one woof about once in two or three hours on average, just to get an answer from me or to say, “Hey, have you seen the clock? It’s meal time.”

I put a new letterbox up a few days ago. The old one was so small and low down that it was constantly full with the junk papers. The new one is A4 sized and higher up so I don’t have to bend so much to look in. What to do with the old one? It’s stainless steel. Who would want it? There’s a Salvos shop nearby, but it’s not the kind of thing they’d want. 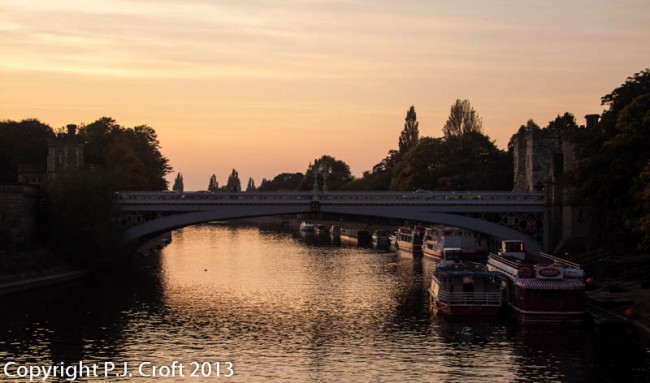