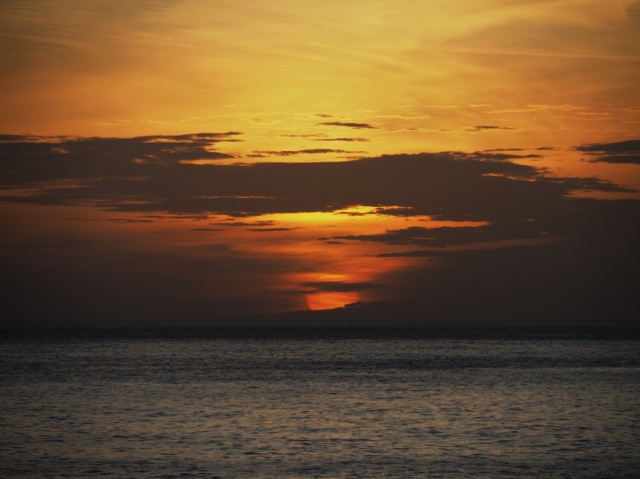 Hot one today. Clear blue skies. I wish I could go into the pool, but I don’t want to go through the painful process of getting out again.

I’ve just had brekky (brunch, really) at the Bali Bagus restaurant where I’ve been every day so far. This time I had Indonesian breakfast – nasi goreng, but I asked to have toast as well, extra. Bless ’em, they didn’t charge me for the toast. This is very generous as they don’t have much custom and their margins must be pretty small. Nice people.

I drew some cash from an ATM across the street. What a fantastic thing, travelling is just so simple now compared with 30-40 years ago. Travellers cheques, remember those? So clumsy, so much trouble. Now my ordinary plastic card that I use for my supermarket shopping at home works just the same here. Just think of the computer power that makes all this happen. All down to electronics and electronics engineers and programmers.

But I’ve just read this morning of a soccer player in China, imported from a Spanish team, who’s being paid $300,000 a week! It’s obscene. China has overtaken the US for the number of billionaires – 596 ! One Chinese alone has amassed US$34.4 billion. You can’t spend that much money. The interest alone at 5% would be $1.72bn a year or $33,076,923.07c a week! How could you possibly use $33 million dollars a week? It’s obscene. The top 20 richest people on Earth now have 50% of the total world’s wealth and they are scraping it in at an ever increasing rate. While Somalians and Ethiopeans are starving to death, do these rich people do anything to help? Apart from Bill Gates, maybe, I doubt it. They go and shoot elephants, or buy the ivory. Elephants are being shot, poached, stolen, faster than their replacement birthrate. It’s obscene.

I noticed that when the cleaner was in here this morning (yes, these units are cleaned daily), there were two guys looking at my staircase and mumbling to themselves. I wonder if my moving out and cancellation has made the management think of installing handrails?

Would I re-book if there were handrails? Possibly. But I’d need a pool ladder, cleaner pool water, and the seat on the balcony removed and steps put in to enable me to step down and up again. (What a stupid design. Pretty hard to fix, too.) Oh, and take the bath out and put in a normal shower in a cubicle, with safety bars on the window so you can’t fall though the louvres.

I sat on the wide bath surround this morning and swung my legs around. It’s much safer than trying to step over that 35cm edging.

I’ve still got the booking at the Astana Villas in May for 8 days. They’re slightly cheaper but all on one level. They’re only half the size of this one, but not too bad. I’ll see how they turn out.

The advantage of these S’cape units is their size, 85 sq.m., you sure don’t feel cramped, and their location, right in the centre of Sanur. It’s a pity they don’t work a bit harder on the deficiencies. I’m not sure how I’m going to review them on the booking web site. I’m not upset, just a bit disappointed.

If they just made a few relatively small changes I’d book again. It’s obvious that some people must live here, or they’ve bought their unit. They’re for sale at US$145,000 on a 21 year lease. That’s A$9,725 a year or A$187 a week. That’s cheap rent. You could sub-let your unit for the times you can’t be here. Hmmm.

The Guardian reports on a dam in Iraq that may fail. It could trigger “unexploded ordinances”. Wow, those Iraqi town council ordinances must be pretty strong stuff.

Ring rang rung
The ABC’s gone bung
I think I should ring
And see that writer hung.

Sink sank sunk
Who woulda thunk
That the ABC
Could feed us such junk?

Sing sang sung
English is among
I’ve run out of rhymes.
I think there’s more to come. 🙂

I’ve discovered that there’s a solar eclipse here on Wednesday next  week, the 9th. That’s Nyepi! Wow, that’ll give it added significance. Very portentous. The path is over southern Sumatra and northern Java, Jakarta, but we’ll see it here. It starts about 06.30am, reaches totality about 07.30am and finishes an hour later.

I’ve put all my criticisms of these units in an email to Kartika, the lady I’ve been dealing with and she’s forwarded them to her managers. Briefly they are:

I’ve been very diplomatic so as not to sound upset. All except the last are basic safety issues and could affect their liability, although I didn’t say that.

Annoyances about a two storey unit – I wanted to make a phone call today, but being downstairs, I realised the only phone is upstairs. I went up there later, only to realise that my mobile, with the phone number list, was downstairs. Duh. I really, really can’t hack those stairs. What a pity.