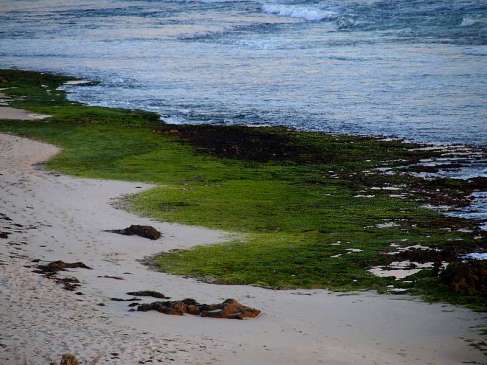 I found the DVR remote control. It was in one of my many plastic bags, but out of sight under my medicine box. I knew I’d brought it. Now I can attack the nearly 60 programs on the hard drive that I always meant to get around to watching …  I started pruning today, watched a few and deleted about 10.

I must say, from the days of crappy, almost unwatchable analogue TV in hotel and motel rooms, this cabin is not bad. It’s got a TEAC 19″ LCD with a DVD player in it, receiving the digital channels, so the quality is OK. If I bought a long cable, I could actually connect the antenna to my DVR and watch in HD on my own monitor. If I could be bothered, which I can’t. Similarly, if I bought a DVD movie I could watch it. Is there any movie that grabs me? Nah.

This has been a trouble free day, thank goodness. I’ve been out to buy food, beer and the papers, and had a good nap. Stopped off at the pub nearby, sat outside in the fading light to drink it and it’s very nice. A middy was $3 in Happy Hour, which is OK.

I also went to the dog beach to check it out and actually waded into the water up to my knees for a while. That’s the first time for several years I’ve been into the ocean, for various reasons. It felt good. Next step is to take Minnie there. I’m not sure if she’ll be able to walk in the sand.

Minnie accepts me going out in the car without fuss (i.e. she doesn’t bark). But when I walk to the shower block here, even though it’s only 50m away, I can’t seem to get her to accept that I’m only going out of sight. She gets agitated and I can hear her barking when I’m in the shower or toilet. Problem.

Only one of the shower stalls has a bar on the wall for someone like me who’s prone to slipping and falling (but I haven’t). But the water pressure is so bad in that stall as to be almost unusable. It just falls out of the shower head which is almost flush with the tiles. Terrific. I can’t use it. That’ll go into my letter of complaint.