Another hari bagus day – sparkling, sunny and not too hot. No doubt about it, Sanur is the place to be for me.

I’ve just been to see my friends at the crispy duck restaurant. The big guy wasn’t there and they couldn’t find him, but I saw the lovely assistant and she drove me back to the hotel. Unfortunately, she says business is very slow for the past two years. Changes to ownership regs for foreigners, plus terrorist fears and the volcanoes have made a big dent in tourism, and people wanting to buy here. It means it’s less crowded for us, but it makes it hard for the Balinese economy and the locals who depend on the tourism. 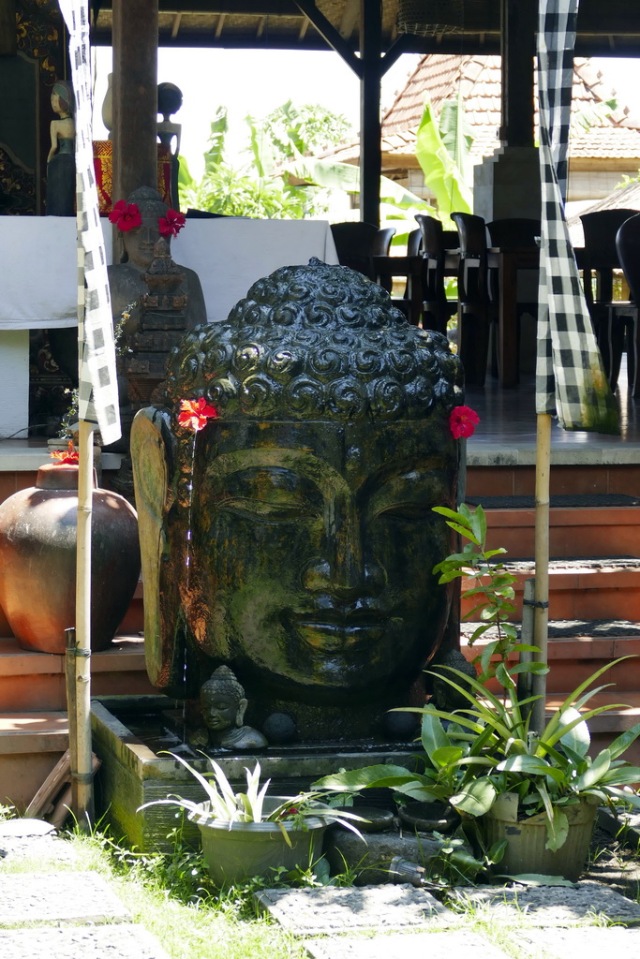 A good thing is that I spoke on the phone to the guy I bought the villa from in 2010/11 and he’s here, and still in good health. I’d lost contact with him and feared he might not be, um, still with us, but no, he sounds good. I go to see them Wednesday morning.

Nap time, then back to the BIMC for my next intravenous alcohol infusion 😉

6:30pm:  Just back from my second visit to the BIMC. Bloody taxi driver didn’t arrive at 3.45pm as arranged. OK, I got another taxi but he saw some mates on the road near the Sheration compound and wanted to stop to talk to them! “Just 5 minutes, OK? I give you discount.” He was only away about three minutes, but I was a bit annoyed as I was already late. We arrived at 4.15pm for a 4pm appointment. It didn’t matter, I still had to wait anyway, but I like to be punctual. Still, this is Bali … relaaaax.

It was 4.45pm by the time I got in and it all went smoothly. She changed the dressings, no problems found. Then the next antibiotic injection, into a vein in my right hand this time. Interesting – they use a very fine steel needle rather than the thick plastic cannula they use at home, which always hurts. I hardly feel these needles. Must comment on that when I get home.

I haven’t even mentioned the cost of the antibiotic treatment: another Rp.1,500,000 ($151) today. Yowch. And there’s another one to come. She seemed to think that would be sufficient, and I took the chance to say, “It’s quite expensive.” She agreed, but that’s how it is.

I was greeted in the lobby by a woman who seemed to be the hotel liaison/customer service person. We had a good chat and I said I’m quite happy about this hotel. It’s the only one I would come back to next trip. That’s if there is a next trip. I’m finding travel hard going now. I get tired quickly and I can’t walk very fast or far. Yet I know, when I get home, I’ll be itching to come again.

I mentioned to her that the balconies are very strange: each room has one, but they are filled by a large wooden platform about 300mm high. That’s at the limit of me to step up – I haven’t tried. It doesn’t invite stepping up. The wanita said they’re meant to be for us to sit on, with a small, low table, Japanese style. All very well, but I can’t do that. Also, the railings are all made of wood and look a bit flimsy to my eye. I’m three floors up. All in all, I’m not keen to step outside.

Nonetheless, with the sliding doors open, it’s magic at dawn and dusk. There’s a large population of small birds here and they sing their dawn and dusk choruses as they nest in the hanging creepers. Add the roosters in the morning … I love it.

I mentioned to her that I really appreciate a comfortable armchair and I’m using two thicknesses of cushion on the one in the room, but I could do with a back cushion. No problem, she had one sent up, and it’s good. So, with a Guinness in hand, I’m content.

I’ll go to the same restaurant across the street that I used last night, I think. I found their food very good, better than the hotel’s. A piece of grilled chicken was moist and fleshy, not like the dry, stringy bit I got here on Saturday night. I also had satay lilit, fish satay. Mmmmm, bagus.