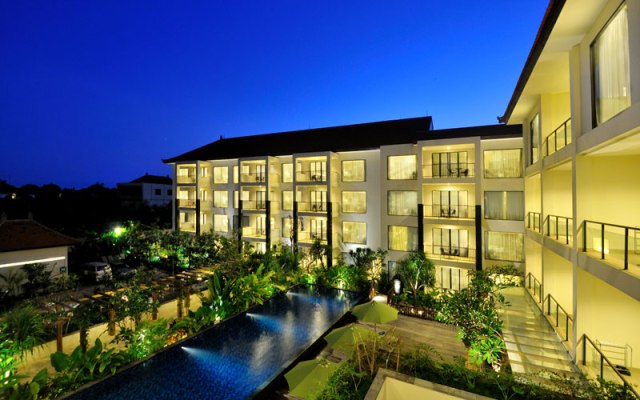 OK, I’ve moved hotels. I’m now in the Taksu Sanur, Jalan Sudamala, south Sanur. It’s not exactly traditional Balinese, sorry, but so far at midday, I’m very happy. I was sorry to move out of the S’cape, but those stairs just scared the shit out of me. I felt I was taking my life in my hands every time I had to do that 90º turn with its narrow triangular steps at the top to go up three steps to the bedroom. There was nothing to hold onto! OK for a young ‘un, I suppose, but not for me. I mentioned it again when I checked out and the guy said, “We have rooms with the hand rail.” Well, why didn’t ya say so? Maybe I could have moved rooms?

Anyway, having spoken to one of the residents, I’m sure he wants to sub-let or rent out one of his units. I’ll speak to him before deciding further.

That still wouldn’t fix the lack of pool ladders, though. The resident guys agreed that it was a bit odd and I’m sure we could whip something up together. There was still no-one in the pool since I wrote about it yesterday.

This room feels so spacious!

This would be the most spacious hotel room I’ve ever had, I think. I’m sitting on that nicely padded chair at the desk. Thank goodness it’s padded; so many hotel chairs are hard wooden horrors. In fact, I think the photo is of my room, because I can see that covered walkway through the sliding doors. Different painting, though. I’m on the ground floor and the pool is to the left. It’s actually a raised pool, about 1m high, but has ladders. 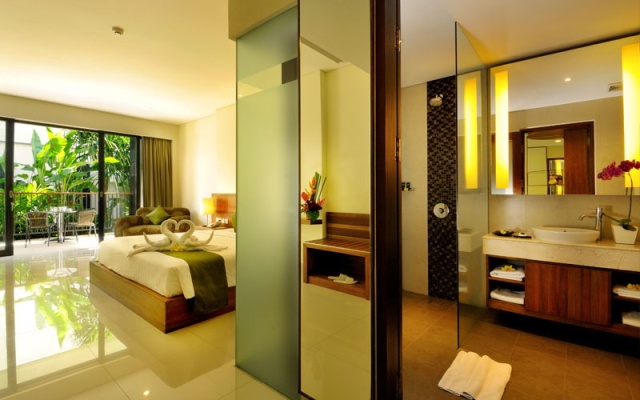 Funny how bathrooms are becoming more and more transparent. The fashion is that the shower can be seen from the bed. Ooooh, sexy. This one’s translucent rather than clear glass.

No hand-holds in the shower, though, and a slippery floor. I’m surprised that hotels don’t take liability seriously, eg the S’cape stairs. If I slipped and broke something, I’d be looking for costs and compensation, especially if I had to be flown back in a wheelchair or something.

The hotel has suites available which are 101 m2 with a separate dining room and lounge. It occurs to me that if I was thinking in terms of spending $20,000 pa on a leased villa (in a thought bubble!), but only spending half to two thirds of the year here, then if I found a suitable hotel and spent $20,000 there (or less, of course!), then I’d be better off. I could book ahead, swing deals and cancel if I needed to. The $20K (or less) might pay for one of these 100m2 suites. That would be far preferable to haggling with banjars and housekeepers and if I didn’t like things, I could move. Hmmmm.

Later: I asked about the two bedroom suites and they are Rp1,500,000 a night, A$154. That’s the single night rate – I’m sure if I said 60 nights it would come down, and I’m sure it would be lower through the Booking.com type of site. I don’t need two bedrooms, just two rooms, but do I even need that? This is pretty nice for half that cost. I’ve asked to see a room, but later.

The wi-fi here is very fast, they say up to 6Mb/s, and it feels like it so far. Great. Totally unsecured, though. Laughably obvious passwords.

And I’ve got a 32″ LG LCD TV with a full range of channels. I’m watching Channel News Asia at the moment and it’s a very nice feed, far less US oriented than that bombastic CNN. They’ve just run a half hour doco on the evolving design of Singapore HDB flats. Yeah, real exciting, right? But I’m interested. I’ve been to Singapore dozens of times and often wondered how big these flats are. Now I know.

Now to prepare for Nyepi on Wednesday. Tomorrow is Ogoh-ogoh Day, with parades and water fights, I believe. My camera is water resistant, I’m not worried. I hope to be there, in Jalan Poso, just down the road a bit.

Then on Wednesday (actually Tuesday 6pm to Wednesday 6pm I think), it’s total silence and darkness. No going out, no music, no lights in the room. I have thick curtains and headphones so I’ll be fine. I’ve got a couple of movies to watch so I don’t need the TV.

The TV has a full range of inputs, by the way, including HDMI and USB. My external DVD drive is USB. I wonder if it’ll work? I think I brought an HDMI cable with me but this laptop is a 15″ Ultra HD screen, so I hardly need anything else.

I think big hotels like this are a bit exempt for non-Bali guests, but I’d better get some basic food in today and tomorrow. I’ve taken the no-breakfast option here ($8.50 if I want to pay) so I need to wander out and check the street out. It looks to be quite an active street.

And I should, should, try to walk to the beach from here. It’s a fair way, about 1Km I think. I can do that at home but in this heat and humidity, I’d better take water and a cut lunch.

Later, 6.30pm: I had a walk and found there are small restaurants all around here, including a nice Chinese just next door, which is where I ate. I haven’t had Chinese for a long time.

I found there’s a Guardian chemist just around the corner (50m or so), a very nice looking up-market warung on the corner with Jalan Poso, a Muslim restaurant across the street (Buka 24 jam – Open 24 hours – why? Oh OK, if you have to get up at 3am for prayers, then maybe you’ll want to eat at 4am? That’s Islam.), and a couple of other small eats places. One, the Warung Jawa Bu”rst (that’s how it’s spelt) looks pretty dubious.

I should add that in 1989 when my good mate and I did a trip thorough Java by bus and train, I was awoken at 3am in Malang by the call of the meuzzin for the faithfull to prayers. It was beautiful! This guy knew how to sing, and it still sends shivers down my spine when I hear that beautiful song in my mind. Did I go to the mosque? Yair, not likely.

I ate at the Chinese place, but only after the waitress held my arm as I stepped up the two steps. I just can’t do it unassisted by arm or stick.

There’s also a Doktor Gigi (dentist) around the corner too, and an interior decorating shop.

The desk tells me Nyepi is 6.30am Wednesday to 6.30am Thursday, so that’s OK. she says we Westerners can use the pool and the restaurant, so no need to bring food in. Just don’t go out onto the street. Easy.

Now to open the bottle of duty free Sapphire Blue gin I brought with me. First use.

Ugh, I don’t know why now, but my right hip has become very painful. It’s been twinging for a few years, especially when I get up during the night, but it’s suddenly hit me hard today. Lucky I brought my walking stick. I didn’t have it this afternoon and I was really hobbling.